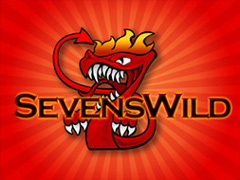 Sevens Wild is a video poker variant that is becoming more and more difficult to find these days. Only a few RealTime Gaming online casinos still spread it and there are just a handful of coin-operated quarter machines at Skyline Casino in Las Vegas. Another known location is The Lodge at Deadwood in South Dakota where denominations of quarter, half-dollar and dollar are spread.
Sevens Wild is based on the same premise as Deuces Wild Video Poker. There are four wild cards, all of which are sevens. Unlike Deuces Wild, 2s are not wild in Sevens Wild.
There are some minor differences in the paytables for Sevens Wild and Deuces Wild. The Sevens Wild paytable reduces the return on four wilds and a wild royal flush. It bumps the returns on a straight flush and four of a kind. Like Deuces Wild, the strategy for Sevens Wild is complicated, especially when dealt one or two wild cards.

How to Play Sevens Wild

The first step in playing a hand of Sevens Wild video poker is to set the preferred wager amount. At a RealTime Gaming online casino and ticket-in/ticket-out machines, choose the denomination and click the bet max button. This will make a five-coin wager. This turns the royal flush payout to 800-1, as opposed to 250-1 on four or fewer coins.
The game will automatically deal cards. On the old coin machines at Skyline, dropping five quarters into the slot will automatically deal cards, or follow the same procedure as the more modern games if using cash.
To bet fewer than five coins, click the bet one button one to four times. Once the preferred number of coins is displayed, click the deal button.
Once the cards are dealt, click the screen above the cards or the corresponding buttons below them to hold the best ones. Click the draw button once this is done. The discards are removed, and new ones replace them. The machine will then determine the best hand and pay it based on the following paytable:
Natural royal flush: 800-1
Four sevens: 200-1
Wild royal flush: 25-1
Five of a kind: 15-1
Straight flush: 10-1
Four of a kind: 5-1
Full house: 3-1
Flush: 3-1
Straight: 2-1
Three of a kind: 1-1
Multiply the odds above by the number of coins bet to come out with the exact payout. The royal flush return assumes five coins are bet. One to four coins pay 250 to 1.