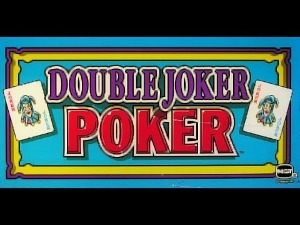 Double Joker Video Poker is a popular VP variant. The difference between this game and regular VP or even Joker Poker machines is evidenced in the title. Instead of just one joker being in play, there is two jokers in each deck. This increases your odds of making premium hands, but the paytables are different as well.
The primary draw to this game is found in the excitement of simply drawing jokers. Even though they are not necessarily going to pay out substantial amounts of credits, getting a joker is always fun and provides an opportunity to hit a big hand.
Double Joker games are most often found on the same IGT machines where players can toggle through and choose from a long list of different types of both video poker and other video games, like blackjack and sometimes even slot machines, most often found when playing at a bar. The head title of this game has an easily identifiable image that, once you play it once, will be easily remembered and spotted on future casino visits.

Payouts in Double Joker Poker are somewhat unique. As is usually the case, a natural five card royal flush is the max payout at 4000 credits. This is the same amount that players generally receive on a regular Jacks or Better or even Deuces Wild game. The interesting part of the pay table on this video poker game is found in the quad (4 of a kind) tiers. The biggest win would be 4 aces, paying 800 credits on a 5 credit, max bet. Now, though 4 aces is notoriously difficult to achieve, it becomes a lot easier when you are working with two Jokers in the deck as well.


Below the Royal Flush and 4 aces wins, 4 of a kind of any sort is also paid out at a premium, ranging from 250 to 400 credits. Of note is the fact that straight flushes pay the same amount as 4 of a kind 5s through kings in this particular game. It goes without saying that this particular game is much more about the exact type of hand that you make than it is about simply making a hand.

Double Joker games can be found in high limit slot sections of many casinos. If you do not find them as primary, standalone games, you may wish to check to see whether they are available in a different machine. One of the places that you might take a look at would be any of the popular Game King machines.
For the most part, Double Joker Video Poker machines are going to be found on the main floor of a brick and mortar casino. Since the strategy involved for absolutely optimal play is more advanced and complex than what you would find in a game like Jacks or Better, the casino will be able to realize a larger house edge as a result of players who are making repeated mistakes.
For the casinos, the more intricate a Video Poker game is, the better. They tend to entice players by offering unique twists with seemingly big payoffs on hands that seem to happen fairly frequently (in this case, 4 of a kind), but the reality is that they either offer inherently lower odds, or they offer worse odds and are also tougher to play.
Double Joker is a fun video poker machine to play, but you should be sure that you are playing with the correct strategy. Learning the rules of this game, like any VP game, will take a little bit of time, but eventually, it will become near second nature. Give this machine a shot, see if the creative Joker dynamic is a fun change for you, and gauge your future interest in the game from there.