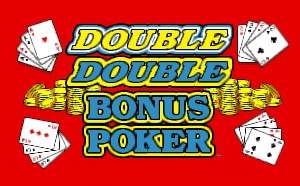 Double Double Bonus Poker is a high variance video poker game similar to Jacks or Better. While the goal of the game is the same – to get a royal flush – there are smaller jackpots for special four of a kinds in Double Double Bonus Poker. The payout is even bigger if a jackpot four of a kind is matched with a special kicker card.
This game is a part of the Bonus Poker family distributed by IGT and may be found in online casino software and at most live casinos on Game King machines. Read on to learn more about proper strategy, how to play and find pay tables.


Click Here to Play Video Poker at Our #1 Casino!

The first step to playing Double Double Bonus Poker is to insert a bill into the acceptor. Modern bill acceptors will also accept tickets that were printed by other games at the casino. Some older machines like those at The D in downtown Las Vegas still accept coins but not tickets.


Click Here to Play Video Poker at Our #1 Casino!
The next step is to bet five coins. This may be done by pressing the max bet button. Players should always bet the max because it increases the payout on a royal flush from 250 to 800 per coin. Once the bet is made, five cards are dealt. The player clicks the hold button on cards that he wishes to stay with and clicks deal. This will remove the discards and replace them with fresh ones. The hand is then graded using the pay table on the machine.
Finding the best pay table and using a players card are two ways to get the best return while playing video poker. Those benefits will not matter if you make mistakes while playing. It is important to learn the proper strategy for Double Double Bonus Poker before inserting your money into the machine.
It is obvious that a player should always keep a royal or straight flush. Four of a kind should always be held, but if the quads are aces, twos, threes or fours, the kicker should be thrown if it is not a bonus card. From there, four to a royal flush should be held. The next steps for which cards to hold are listed below in the order of importance:
– Three aces (discard bottom pair if dealt full house)
– Full house, flush and straight
– All other trips or four to any straight flush
– Pair of aces (break to pair aces up)
– Two pair
– Pair of jacks or better, unless JQK suited, then hold royal flush draw
– Any other three-card royal flush
– Four to a flush
– Four to an open ended straight
– Pair of 10’s or lower
– Four un-paired cards jack and higher
– KQJ offsuit; also hold a nine, if dealt
– Four-card gutshot (inside straight draw) with two cards jack or higher
– QJ off-suit
– Bare ace
– JT suited
– King-high with a queen or jack
– Ten with a suited queen or king
– Bare jack, queen or king
– Any gutshot
– Redraw five new cards

While the game is based on Jacks or Better, the higher payout for special quads changes some of the decisions. The difference is that players will break apart three aces from a full house and two aces from two pair. Players dealt a special four of a kind will need to make sure the kicker is an ace, 2, 3, or 4. If not, the kicker should be tossed in the hopes that a bonus card is drawn.

There are 13 casinos in Las Vegas that offer 10/6 Double Double Bonus Poker. All major Station Casinos properties have this game which includes:
– Red Rock Resort
– Green Valley Ranch
– Texas Station
– Palace Station
– Sunset Station
– Boulder Station
– Santa Fe Station
– Fiestas
– Aliante Casino
– Club Fortune
– Sam’s Town
Most other casinos will offer this game where a full house only pays nine coins. Some casinos go as low as seven or eight on a full house and five on a flush. Those machines should be avoided as the house edge is more than 3%.

How to Increase Your Return at Double Double Bonus Poker

While finding the best pay table for Double Double Bonus Poker is important, there are other steps to take to ensure receiving the best return on the game. Always use a players card when gambling in a casino. New players often receive perks like $5 or $10 in free play. The first trip to a casino will often trigger an inflated mailer to entice a return visit. This will include free play and maybe a hotel room. A food comp is sometimes included.


Click Here to Play Video Poker at Our #1 Casino!
The actual play will also generate comps. Points earned while on the machine can often be converted to free play right on the machine. Some casinos pay cash for these points.
There is little downside to joining a casino players club. The only exception is if you are a professional gambler that only gives action on 100% video poker or counts cards at blackjack. Some casinos will eventually stop mailing offers if they suspect that you are an advantage gambler.
Online casino players are automatically enrolled in the site’s VIP program. Make sure to read the rules on the promotions page. Some online casinos require players to opt in for VIP and bonus programs.

Players used to playing Jacks or Better or other bonus games may make some errors at Double Double Bonus Poker. One mistake may be not going for an ace, two, three or four kicker when dealt bonus quads. Another may be failing to break apart a full house with three aces or two pair when one is aces. While quad deuces, threes and fours pay a bonus, these pairs should not be kept over flush and open ended straight draws.

Always Play with a Players Card

Casinos issue players cards upon request. These return free play based on the total amount wagered. Players can also get comped based on this action. At the end of the month, the casino will rate the play and send offers by mail that include free slot play, meals, and hotel, as well as other coupons.


Click Here to Play Video Poker at Our #1 Casino!