Currently, all 4 of the United States’ major sports leagues (NHL, NFL, NBA, MLB) are fighting the state of New Jersey’s recent challenge of the Federal government’s ban on sports betting. The Supreme Court is going to be hearing all sides of the argument beginning next week, but talk is already heating up about what the conversation might be like and if a decision will be made.

Despite the half-hearted fight being put up by most sports leagues, it is become increasingly clear that most would rather see sports betting grow rather than continue to be stopped most everywhere. This is because new commissioners, pushed by a changing of societal thought, are beginning to realize that sports betting may not only increase interest in the different leagues, it may also create additional streams of revenue as well.

A Changing of the Times

In the past, former commissioners such as the NBA’s David Stern and MLB’s Bud Selig had made it very clear that they thought sports betting should stay as far away from their respective leagues as possible. Even 5 years ago, in 2012, all 4 of the aforementioned leagues—as well as the NCAA—sued New Jersey Governor Chris Christie after he attempted to introduce sports betting to the racetracks and casinos around his state. As you can tell from the fact that this article has been written, the lawsuit brought against Christie reached its goal. 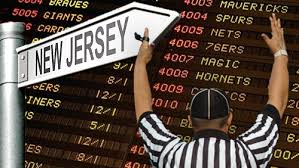 A major part of the reasoning behind the 2012 court battle was due to scandals in US professional sports leagues that had happened previously. Everyone knows about baseball’s Pete Rose, but there was an equally horrifying example of corruption on the part of an NBA official. With commissioners who presided over these scandals still in power at the time, advocating for sports betting’s scope to be expanded did not seem like such a wise decision. Since then, however, Bud Selig has been replaced by Rob Manfred and David Stern has been replaced by Adam Silver. With these replacements came a new way of thinking; one that has been much more open to sports betting than ever before.

Commissioners like Silver and Manfred are not simply staying quiet about sports betting being more prevalent, but have actually been quoted (outside of the courtroom) as being in support of it. Just 3 years ago, Adam Silver spoke to the New York Times and very plainly insinuated that the Federal ban on sports betting should not exist. Earlier in 2017, baseball’s commissioner said that it cannot only increase “engagement” in the sport, but also “fuel the popularity” as well. Manfred, when talking about increased engagement, was speaking specifically about in-game wagers, such as the outcome of the upcoming pitch, or at-bat.

While the NBA and MLB seem to be fully in support of the ban on sports betting being lifted, not all commissioners share those same sentiments. Roger Goodell, who heads the NFL, has not ever been quoted as being in support of legalized and regulated sports betting, but has recently admitted that his position on the topic has “evolved” in recent years.

Perhaps the lone outspoken opponent of lifting the ban is the commissioner of the NHL, Gary Bettman, who has perhaps the most ironic last name for someone who is against sports betting. He has not so much railed against lifting the ban, but has instead laid claim to the opinion that it is not a matter he or his colleagues are overly concerned with.

Geoff Freeman, CEO of the American Gaming Association, talked about how leagues are clearly taking new stances on sports betting becoming legal, regulated, and a part of modern day US sports. Speaking with the Associated Press, he said, “I think there are multiple signs of the sports leagues, including the NFL, taking a fresh look at this issue. You don’t place a team in Nevada, in Las Vegas, without an understanding that the issue is changing. Frankly, you don’t play games in Wembley Stadium, where most of the people in the stands are betting on their phones during the game, without an understanding that things are changing. For those that want to see sports betting, the trajectory is in their favor.”

Despite this support, there is still a battle to be fought, and a battle that the aforementioned, supportive leagues are openly challenging. The state of New Jersey is challenging the Constitutionality of the Federal ban on sports betting, which was first established back in 1992. As part of the ban, only 4 states—all of which had previously legalized sports betting—were able to offer betting on sports. The state of New Jersey thinks this is Unconstitutional and it seems as though they have a fairly strong case, seeing as their casinos are legally not allowed to offer something Nevada casinos are. Being that this is not a states’ rights issue, the Federal ban very well might be proven to be Unconstitutional. Next week is when the action will really heat up, and perhaps we will be given a final ruling on the matter.