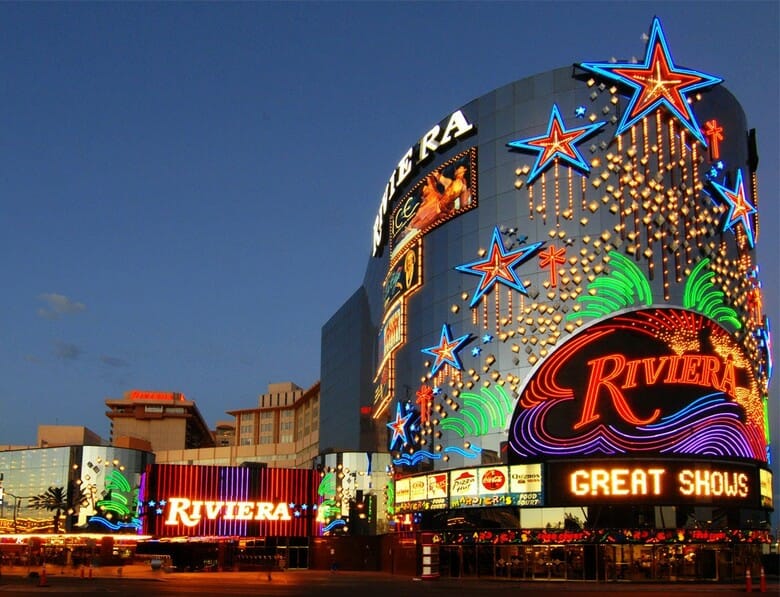 **2022 UPDATE**
Riviera was demolished in May 2015. Failing to make a profit after the recession in 2008, the Las Vegas Convention and Visitors Authority ultimately demolished the property to make room for the Las Vegas Global Business District.
Riviera is one of the oldest casinos on the Las Vegas Strip that is still standing. Built in 1955, it still operates today, even while most of its former competitors having been imploded. These now defunct casinos, including Stardust, Westward Ho, and Frontier, are now vacant lots. These properties were razed to make way for new resorts that never got off the ground. This has left Riviera in an island with Circus Circus in the depressed northern end of the Las Vegas Strip.

The allotted casino floor, according to Nevada tax records, is 110,000 feet. The actual space utilized for gaming is much lower. That is because Riviera has closed three sections of its casino floor due to a lack of action. Two sections were located near the rear of the property. One became a lounge that is only open for special occasions. Another now has a wall that gives the appearance of being permanent. Another section by the pool entrance has now also been disguised in a similar fashion.
In 2012, new management attempted to brand Riviera as the best place on the Las Vegas Strip to gamble. A Single Deck Blackjack game that paid 3-2 on a natural was introduced. The double zero roulette wheel was replaced by one with just a single zero. Craps odds were raised to 1000 times and EZ Pai Gow, where the dealer pushes on a queen-high pai gow, hit the casino floor in a new Asian pit.
Apparently, none of this worked. All of these player-friendly games have been removed from the floor. Craps now allows just 3-4-5 odds, the roulette wheel has two zeros, Single Deck Blackjack pays just 6-5, and the entire Asian table games pit is gone.
Most six-deck blackjack games pay 3-2 on a natural. The minimum is just $5 during the day and $10 at night. The maximum bet is $2,500. Single Deck Blackjack starts at $5 and allows wagers up to $1,000. There is a $10-$2,500 double deck game that does not allow doubling after the split. All games hit a soft 17.
Riviera offers a unique blackjack game. It is called Bottoms Up. Both dealer hole cards are exposed. The dealer wins all ties and blackjack pays just even money. The only advantage is that a player automatically wins on a natural blackjack so there are no ties for that nearly 400-1 occurrence.
There are two double zero roulette tables with $5-$2,000 limits. Craps allows wagers between $5 and $2,000. Baccarat is available with $10-$2,000 limits. Three Card Poker and Let it Ride are available with $5 minimum bets and $100 maximums.
One feature of the Riviera table games is $1 blackjack. This is a throwback to the game that was once popular at Sahara before it closed. When Riviera first rolled this game out, it was a gimmick available at just one table. The casino has been known to spread as many as four of these tables during peak hours. Bets under $5 pay even money on blackjack. Other wagers receive a 6-5 payout on a natural.
William Hill operates the sports book. It is a small book located in the front of the property. It even has a window on the Strip with the latest odds posted. This window is only in operation during high volume events. Deposits and withdrawals for William Hill’s mobile app are processed at this location.

The Riviera Hotel offers several room choices. The Classic Room is dated and starts at about $30 per night. The Luxury and Deluxe rooms are modern and are slightly more expensive. There are three suite floor plans available at Riviera. A $15 per night resort fee is charged for all rooms that are not comped.

The dining options at Riviera are limited. R Steak and Seafood was once known as Kristoffers. It is a casual steakhouse that is one of the best values in Las Vegas. It has been known to close when hotel occupancy is low so calling ahead during the week for reservations is always a good idea.
Wicked Vicky Tavern, previously known as Queen Victoria Pub, is a tavern with a beer and bites menu that will appeal to visitors from the British Isles. The Banana Leaf Café is a 24-hour dining option. It serves breakfast, sushi and other Asian cuisine. There is also a food court with many local quick serve chains. Some are open 24 hours a day.

Outside of the restaurants, there is only one bar at Riviera. It is the main casino bar. It offers $2 beer and $3 well specials 24 hours a day.

Riviera is located on the north end of the Las Vegas Strip. It is north of Encore and across from Circus Circus.

Riviera specializes in budget entertainment. Entertainment includes Crazy Girls, one of the longest running burlesque shows in Las Vegas, as well as Men the Experience, and Pawn Shop Live. There is also a comedy club with tickets that start at just $20.
Riviera likes to boast its past. There are photos from last century to show that the property once hosted top headliners. These pictures are located throughout the corridors of Riviera.