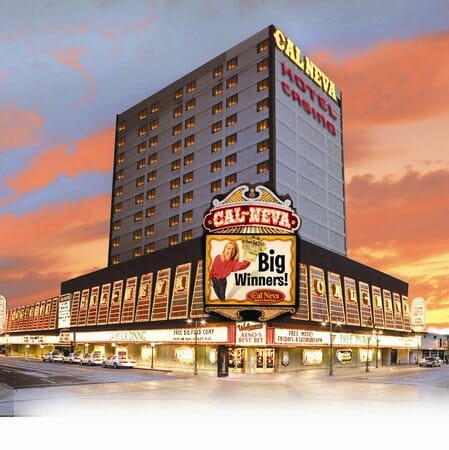 Club Cal Neva is a popular casino located in the heart of downtown Reno on E 2nd Street, just across from Harrah’s. It is one of the oldest casinos in the area, first opening its doors way back in 1962. This helps give the casino a true “Reno ambiance” and makes it ideal for lower limit players. Today it is one of only two of the original casinos in Reno that is still opened. It once owned the large Virginian Hotel, which has been closed for some time now with no clues as to when it will be re-opened.
If you’re ever in Reno, you’ll recognize Cal Neva by the bright red and gold lights outside that feature their large advertisements for inexpensive food deals. Their former hotel, the Virginian, used to offer only low-cost options focused on affordability and practicality, but it closed its doors back in 2004 and has not re-opened. With that said, it is one of the most historic and practical places to gamble in the city of Reno.

The casino floor at Cal Neva is fairly small but it does feel much larger than it actually is. The gaming area spans across 3-floors and covers two city blocks (E 2nd Street and N Center Street). The casino has two main gaming areas which are connected by a cross walk and sky-bridge. This spans across Lincoln Alley; a small alleyway between both gaming areas. On the lower floor of both facilities you’ll find the main pit games, while the upper floors spread video poker and slots exclusively.
All in all, there are just over 36,000 square feet of gaming space at Cal Neva which includes over 800 slot machines and 40+ table games. It has expanded slightly over the years, undergoing a few small renovations, but has kept much of its vintage Reno charm.

With its relaxed atmosphere, Cal Neva has pretty low table minimums at blackjack and most other games. It is not uncommon to find $5 min blackjack tables; even on the weekends. The max table bets at these games range from $500 to $2,000 with minimums from $5 up to $25. As is the case with most other casinos in the city of Reno, you will not find the best blackjack rules here. They do pay 3-2 at most tables though, with the downside being that you can only double on 10’s and 11’s and/or can’t double after you split your cards.
There are a total of eleven double deck and five single deck blackjack tables, all of which pay 3-2 on a natural. The double deck games will not allow you to double down after splitting a hand. The single deck games only allow double downs on 10’s and 11’s, and you cannot double after a split. These tables are spread across both East and West floors, but the same rules apply regardless. Though the rules here are not ideal, it is pretty standard for Reno.

If blackjack is not your game, Cal Neva also spreads a few other popular table games across both gaming floors. These include Let it Ride, Craps, Pai Gow Poker and Three Card Poker. The table minimums at these games is also quite low, generally carrying just a $5 minimum.

Cal Neva has some of the best video poker machines in Reno, spreading mostly Game King machines. Almost all video poker games here will pay over 99% while some pay 100%. The best machine to play at which offers an even 100% return is full pay Jacks or Better. This machine is offered in both 50¢ and $1.00 denominations, with 5 credits max bet required to get the Royal Flush bonus pay.

The sportsbook at Cal Neva is only opened during major sporting events including NFL and NBA games, most NCAA games and a few other large sporting events. It is considered one of the best in Reno, and has even been voted such by many sports betting enthusiasts. They have some of the best paying parlay cards in Northern Nevada. If you visit, there are three big screen TV’s and many other smaller ones throughout. There is ample theater style seating here as well.

Restaurants and Bars at Cal Neva

Club Cal Neva does not have an overwhelming selection of dining options to choose from, however it makes up for this with pricing. The most popular option is the Top Deck Restaraunt which is opened 24 hours and has some of the cheapest food in Reno.
Top Deck Restaurant – Offers inexpensive American food, with the best deals in Reno.
Steak and Pasta House – A casual Italian/American restaurant with competitive pricing to Top Deck. Meals start at just $6.99 and are opened Thursday to Sunday from 5PM.
The Casino Grill – Standard grill offering quick bites with an American food menu.
There is just one bar at Cal Neva, but you can get comped drinks if you’re actively playing table games or slots. They also host the infamous karaoke night on most Thursdays-Sundays, which often results in fist fights and violence for whatever reason. It’s cheap entertainment, though you’ll find yourself constantly looking over your shoulder frequently.

Off and on throughout the long history of Club Cal Neva, it has had its own hotel. Currently it does not have one, after selling the Nevadan tower back in 2015, about 10 years after purchasing it from the owners of Riverboat. Prior to 2004, Cal Neva had owned the Virginian tower, which is just next door to the casino floor. It still stands today, but is still not opened. With that said, you will not be able to stay overnight at Cal Neva, though you can often find rooms from other properties nearby. Your best bet is likely Harrah’s, Eldorado or the Nugget which are all within walking distance.