As is almost always the case, this week was a busy one in the casino world. To be more specific, there were a few noteworthy stories from in and around the Las Vegas Strip that made headlines this week. One of the major themes of recent times has been the shift of Las Vegas from an entertainment town to a sports and entertainment town. Hockey just came to town, football seems to be on the horizon, and there may be even more than that to follow. These and other news stories will be rounded up and reviewed below as part of our weekly recap. 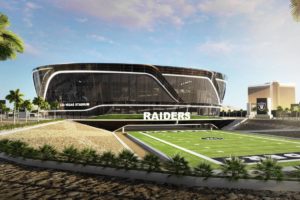 Anyone with even the slightest bit of brick and mortar casino experience will resonate with the frustration that is the loyalty program card. While the loyalty programs themselves offered by most casinos are great and offer some attractive perks, the cards have long been a nuisance. Whether it is the card terminal not working, your card being lost, or any number of other difficulties relating to the replacement of a lost card, it always seems as though loyalty cards end up being more of an annoyance than a perk.

Station Casinos is looking to change that by way of their cardless loyalty program. Gone are the days of toting around and swiping/inserting a cheap, plastic loyalty card. Now, players can reap the benefits of Station Casinos’ loyalty program with just their phone and an app. At the present moment in time, Barley’s Casino in Henderson, Nevada is the only Station Casino offering the cardless program, but it has thus far proven to work nicely.

Once you download the app, setting up your account takes a matter of seconds. After that is done, you simply need to activate your Bluetooth and head over to your preferred gaming terminal or table. Once you are near a given terminal or game, you can seamlessly connect with your phone and your rewards points will be registered. You do not have to worry about losing your card, it not functioning, or any other problem that you might have experienced in the past.

This whole system, despite seeming long overdue, is still in what can be referred to as the early testing stages. There are still some issues that need to be worked out, but in the early going of things we have seen some signs of promise. After all, with it being 2017 a move like this seems like it should have happened a long time ago.

For the last few years now, there have been seemingly constant conversations relating to the Oakland Raiders making yet another move, this time to Las Vegas. Not only would this mark the first time Las Vegas has permanently hosted an NFL team, it would also be the 3rd time the Raiders have moved. As it stands, the move is just about official and got even more official this week, with the announcement that their 65,000-seat stadium would break ground on November 13th.

The November 13th date has not yet been independently confirmed, but sources very close to the situation are confident that is the day. Regardless of when, exactly, ground will be broken, there will be construction on the Las Vegas Raiders’ stadium before Thanksgiving, and that is very exciting and/or sad news, depending upon where you live and who your NFL team is.

With all this talk of the Raiders making a move, it might be easy to forget that the NHL just brought its first Las Vegas team to the table. In the midst of all this, the WNBA has also been quietly making moves to move one of its teams to Sin City. Bill Laimbeer, who himself was a star NBA player, is reportedly linked with a move that would relocate a WNBA team to Las Vegas and see the team owned by casino giant MGM Resorts.

Bill Laimbeer does not have any grandiose Las Vegas connections, but a few weeks ago he received a phone call regarding MGM’s possible interest in relocating the San Antonio Stars to the Mandalay Bay Events Center. Laimbeer, though an NBA star, has deep roots in the WNBA and has been around the league for just about the entirety of its existence. He has just completed his 5th season as coach and GM of the New York Liberty, and it seems as though his off-season schedule just got a bit busier.

This particular situation is an interesting one because it seems as though it is moving forward quickly, though very few details are known at the present time. Being that the Mandalay Bay Events Center is already an established entity on The Strip, the move can be streamlined (versus the Raiders’ move, which mandates a stadium be built prior). We will be keeping a close eye on this situation going forward, but all signs are pointing to Las Vegas being granted San Antonio’s WNBA team.