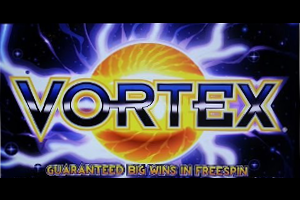 Vortex is a penny slot game created by Multimedia Gaming; a company that was acquired by Everi Holdings in late 2014. It is clear to see that this game is a bit dated, but the gameplay experience is straightforward – making it great for players who may not have so much experience with slot games. Vortex was released shortly before Multimedia was acquired by Everi, and is found at an abundance of casinos from Pennsylvania to Las Vegas.
Vortex is not a game where you can expect to win very often. In fact, you may play dozens of spins and end up just barely keeping your head above water. Of course, the catch to this is that if you do hit a bonus, the winnings can be quite significant, even for players who may not be making significant wagers per spin.

Vortex is a 5-reel slot game that has a total of 20 paylines. As a penny slot, this means the max bet available is almost always $1 per spin. The game makes sounds and noises you would associate with outer space as it is depicted in movies and television shows. With that said, the sounds are not overbearing or annoying, which was unexpected.
With wilds to help spur along some winnings during regular gameplay and the opportunity for a Vortex Bonus make this game both easy and enjoyable to play.

As was mentioned above, triggering the bonus round in Vortex is not an easy thing to do. The way you trigger the bonus is simple, and occurs when you show three Vortex symbols on reels one, three, and five. There is no pattern they need to be in, they simply need to be shown on the reels mentioned.
When the unmistakable Vortex symbols appear, the screen will change and it will literally send you through a vortex where you are awarded with 10 free spins as well as 10x the bet made. There are some casinos where the award is only 5x the amount bet and 5 free spins.
According to the game rules, there is the possibility of many retriggers, each of which will award an additional five free spins. When you retrigger the bonus for the first time, you are given the five free spins plus a 20x multiplier on the initial wager that was made prior to the bonus being triggered. The second retrigger will award a 50x multiplier and all subsequent retriggers will award a 100x multiplier. In total, you are able to receive 50 free spins.
Though getting to the Vortex Bonus is no easy feat, players who make it there often experience massive wins. Retriggers occur often and that can make an otherwise tough game more rewarding than you might expect.

You will not find any sort of traditional jackpots or progressive jackpots with Vortex, but big wins are still very much possible, by way of both big line hits and the bonus round. In particular, the bonus round can yield some very impressive winnings, even with bets as small as $0.50. This game is one where the bonus round is tough to achieve, but once you make it there you tend to win often.
It is tough to say what the “maximum” amount of money that can be won from Vortex, but a single $1 wager with a few bonus round retriggers can yield wins consisting of multiple hundreds of dollars, possibly even thousands.

Vortex is as classic a penny slot as exists, so you will be hard-pressed to find it in any high limit rooms at casinos. Most Vortex game terminals cap you at $1 per spin, so it does not necessarily translate into a game that would exist at the high limit level.

An online version of Vortex does not exist, however an internet search for “Vortex Slot” will bring about a number of tempting options. Though there may even be similarly named slots, or casinos with “Vortex” in their name, the Vortex game produced by Multimedia is only available at brick and mortar casinos.