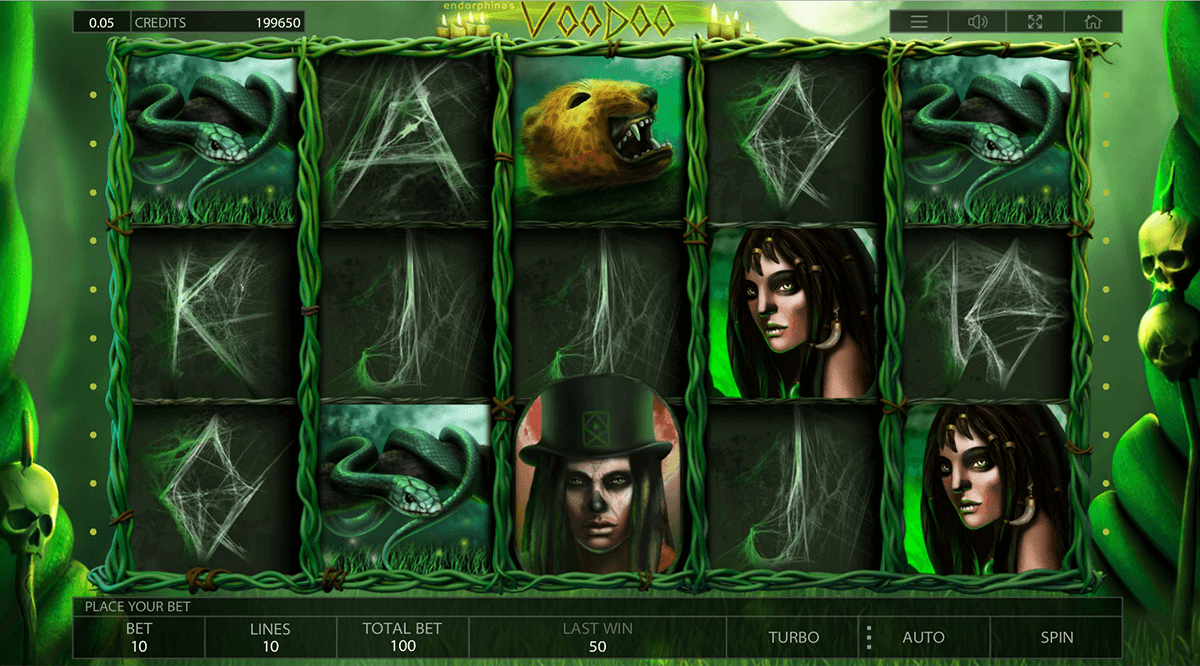 Vodoo slot has been designed and released by Endorphina. The company has an array of flash-based slots available to play on US casinos.
This slot is pretty basic in terms of placing bets, sound and graphics, but all the same, the gameplay is quick and the payouts come fast with a 96% RTP and is a high variance slot based on the classic Book of Ra.
Symbols wins are key to keeping a steady bankroll on the Vodoo slot. There are four symbols on this slot that will give players a winning combination for just having two on a pay line. The slot pays out quite frequently as a direct result of this. The scatter is also the substitute wildcard symbol; while the scatter also triggers ten free spins, which is where the player will banking the majority of their larger wins.
For the most part, it is the selective gamble feature that stands out. Players can opt to gamble and if they do not like their odds, then they can exit the round without penalty. With the right math, there is an opportunity to make the right gambles and bank some hefty wins.

The Vodoo Sound and Graphics

The idea of the theme is to give players a spooky feel and the graphics, as well as sound effects, pretty much do just that. The dull green coloring has been designed to purposely give the theme this very effect. 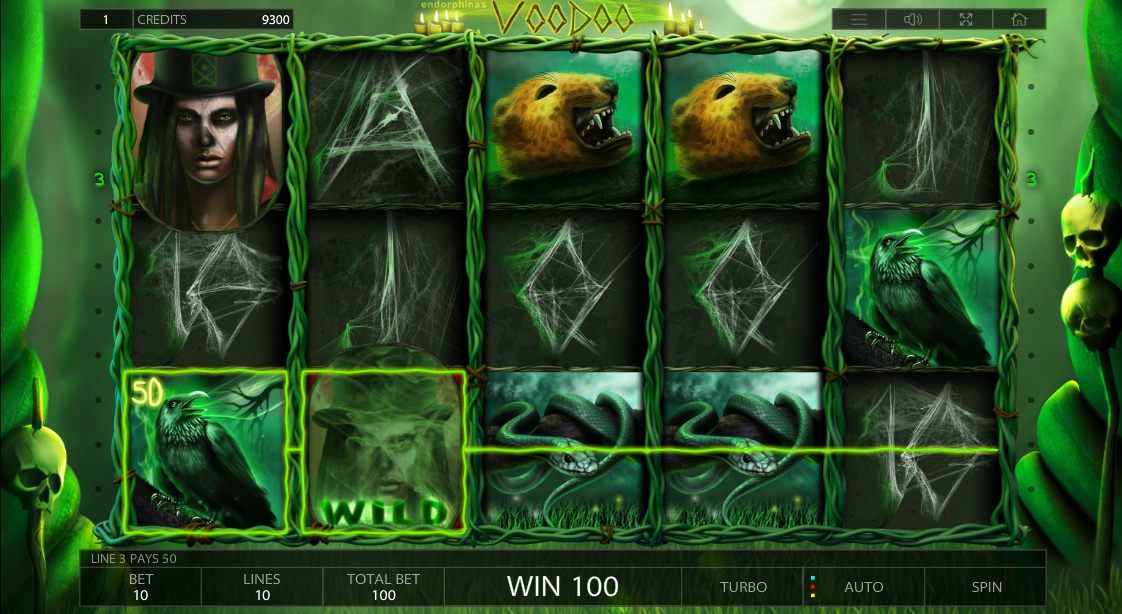 Animations for the wild include a misty effect while many of the symbols such as the Ace symbol also have the same green mist. Many of the symbols also have their own animations when you land a combination.
On a desktop, this is not the most amazingly designed slot, but it is the perfect slot for mobile players due to its simplicity in design. Overall though, on both desktop and mobile, the graphics are still clear and crisp as they should be with any modern slot.
In the options area, you will be able to choose whether you want the spin button in left-hand mode or right-hand mode, plus you will be able to toggle master, effects, and background sounds on and off. By default, they are off, and when you enable them, they will need downloading, which can take a few seconds.

On Vodoo online slot there are two main feature bonuses:

The scatter symbol triggers the free games bonus round. 3 or more scatter symbols anywhere in view on the reels will trigger the free spins round. The scatters do not need to be adjacent to each other or begin on reel one – just land three and ten free spins will be awarded.
In the free games round, the scatter cannot substitute other symbols on the game and therefore relinquishes its wildcard feature for the duration of the round; however, scatters can retrigger in the free game round giving you another 10 free goes on the reels.

Each time you land a winning spin, you are given an option to ‘Take Risk’ or ‘Take Win’. If you select ‘Take Risk’ you will be whisked into a card game. There are five cards lined up with 1 card face up. The idea of the game is that you gamble your winnings from the spin and double your winnings by choosing one of the four face-down cards. If you choose a face-down card that is higher than the face-up card, then you double your money and have the option to either to ‘Take Win’ or ‘Take Risk’ again.
In fact, as you enter this round and see the face-up card, you still have the option to ‘Take Win’. You would normally do this if the face-up card is 6 or below to get the best odds. Otherwise, you can exit the round without any penalty if you do not think the odds are right for you to gamble.

On the Vodoo slot, the scatter symbol is also the wild symbol. This is quite unique to Endorphina as many other slot providers do not combine the scatter and wild symbols together. This symbol is Damballa, the spooky looking man with the dreadlocks and voodoo top hat. Any time a scatter/wild lands alongside any of the other symbols on the slot it can act as a wildcard helping players complete the combination.