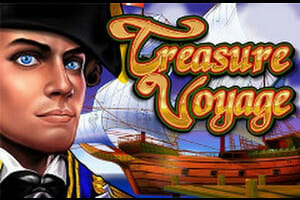 As you might expect, Treasure Voyage has a nautical theme that is similar to many other slots produced by Konami. This game boasts a simplistic theme with straightforward gameplay, making it a perfect slot for beginners. Unfortunately, because this machine is only offered as a penny slot with a hefty house edge, it may take some patience in order to come away with any treasure before you are shipwrecked.


Click Here to Play Slots at Our Top Rated Casino!
Even though this is a 5-reel slot game, the leftmost and rightmost reels feature only four symbols while the middle three reels have 5. Treasure Voyage features the types of symbols you would expect to see align with its nautical theme nicely, including a pirate’s ship, treasure chest, killer whale, parrot, poker card rankings 9-A, and more.

There may not be a wealth of intricately designed bonus rounds available on Treasure Voyage, but the bonuses that do exist help offset the harsh odds. Just like the base game, the bonus round is easy to understand, making it as straightforward as possible.

In order to trigger the Free Game Feature, you must uncover three compass symbols during the base game. It must be noted that the compass symbol only exists on reels 2, 3, and 4. Once this happens, you are awarded 12 free games that begin immediately.
During the Free Games feature, any reel that shows a pirate symbol will be nudged until that reel is stacked with pirate symbols. This is something that not only increases your chances of winning, but increases your chances of winning a decent amount. Finally, by uncovering three additional compass symbols during the Free Game Feature, you can earn 12 more free games.

As was mentioned above, there is only one bonus round featured on Treasure Voyage. To make a short story even shorter, the Free Game Feature takes up almost no time at all. The 12 free spins are automatically spun for you, so you could not extend the round even if you wanted to. Of course, if you trigger an additional 12 free spins you run the risk of spending some time in the bonus round, but even then it will not exceed a few minutes, at most.