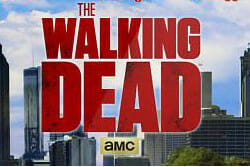 One of the most popular shows on television is now also one of the most popular slot machines in casinos around the world. AMC’s “The Walking Dead” was first introduced to casinos in slot machine form by Aristocrat in early 2014.
Since it was released, “The Walking Dead” video slot game has been named as “Casino Product of the Year” in the Global Gaming Awards (2014). At the time, Aristocrat’s Vice President of Gaming Operations Dallas Orchard said: “the Walking Dead Slot Game has been an instant, incredible success, with operators and players everywhere responding very positively to the game.”


Click Here to Play Slots at Our Top Rated Casino!
Video slot games like “The Walking Dead” can be balanced to provide positive results for both casino operators and gamblers alike. Aristocrat seems to have their hand on this pulse by offering immensely popular themes that bring people to play their games while also providing enough gameplay to keep people playing their games on a regular basis.
The casino has a large house edge with penny slot machines and they’re happy to have people enjoying the gameplay while in the casino. “The Walking Dead” generates more interest than some other video slot machines with the addition of multiple progressive jackpots that reach over $500,000.
A slot machine with zombies doesn’t seem like a recipe for mainstream success but this game doesn’t just show clips from the TV show sliced into an already existing game. The clips from the TV show combined with animated zombies and 3D sound are so true to the show that you feel as though you’re almost a part of an episode and a part of this video slot game. “The Walking Dead” zombies are at their best when appearing in one of the different bonus rounds available in this game.

Despite looking complex with multiple lines, video slot machines are fairly simple to play. Choose how many credits you’d like to play and press spin. The maximum bet for “The Walking Dead” is always $3 per spin. If you’re not into the big jackpots and just want to play bonus rounds you can access all bonus round features available in the game with just a $0.75 wager. The maximum bet for $3 is where you have the best chance at winning the major progressive jackpot however. This begins at $500,000 and grows as others put coins into machines. It is then reset once someone hits a progressive.
You can win several different types of free spins bonus games when playing the “The Walking Dead.” The bonus rounds available at “The Walking Dead” machines are as follows:
Reel Growth – The 2nd, 3rd, 4th and 5th reels will randomly expand to a height of 5, 6 or 7. This gives more opportunity for traditional video slot wins.
Wild Attack – Random positions in the Reel Growth bonus will replace other symbols with Wild symbols.
The Horde – The Horde bonus will show a winning combination on the reels during the Reel Growth bonus spins.
Center for Disease Control Wheel – This different wheel bonus allows you the chance to win credits, multiply prizes with the Grenade Bonus or you might set off yet another type of Bonus Round spin session called the Walker Bonus. The Walker Bonus is where you’ll find a great chance to win a 10x multiplier.
Escape From Atlanta Free Games Bonus – This is your traditional free games Bonus round.

There are three smaller progressive jackpots available in addition to the Grand Prize. There are Mini, Minor and jackpots that can reach over $500. What makes these smaller progressive jackpots better than some other video slot machine jackpots you’ll find is that they can each be multiplied by as much as 10x during the bonus games and added to other bonus round wins. When you complete the various Bonus Rounds in “The Walking Dead” a screen will show each of your Bonus Round wins add up to potentially be a huge jackpot.

Winning a jackpot in “The Walking Dead” isn’t as simple as some basic video slot machines. Bonus rounds can last over 10 minutes and include different Bonus features such as free spins and free games that combine to give you some of the best jackpots in the casino.


Click Here to Play Slots at Our Top Rated Casino!
While “The Walking Dead” is one of the most fun slot machines in the casino today it’s also a penny slot game. Penny slot games often have the largest house advantage for the casino. Like with other penny slots, you should expect to see some really big highs but also some annoying lows. The good news is that Aristocrats has a tendency to manufacture slot machines that allow for longer gameplay which can lead to more chances to win a jackpot.