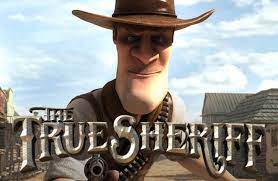 The True Sheriff slot was designed and developed by Betsoft; a well-known slots developer licensed to operate in the USA.
This slot is an exciting animated and 3D cinematic Wild West style theme. Admittedly, on first impressions, The True Sheriff may not seem like much, but once the bonus features start to trigger, this soon becomes a very playable slot with plenty of ways to win.

For smaller wins, there is a sharpshooting sheriff blasting wild symbols on to the reels and a double up feature giving player frequent payouts. The scatter symbol is also reasonably frequent paying out a combination win as well as being the key to launching a lucrative free spins round. All this leads up to a superbly animated bonus round that is not as frequent as the other features on this slot but has the potential to earn players a substantial profit.

The True Sheriff Sound and Graphics

Initially, you will become acquainted with the graphics and animations of the Sheriff. He stands on the side of the reels smoking, spitting, propping up his hat, taking his hat off, and spinning his gun. He even takes a snooze if you leave the reels still for a while. This is just a taster for what is to come.
Before you spin the reels, Western-style music starts to play out. As soon as you begin to spin the reels, the action starts to heat up. Each time a combination lands on a pay line the symbols start their very own unique animated dance giving life to the well designed, but very still, Western background setting.
However, to experience the full display of animations and special effects on The True Sheriff slot, you will need to hit one of the many bonus features. Scenes such as the Sheriff blasting symbols on the reels, playing cards in a tavern for double ups on your wins, and a showdown bonus game of heads or tails all come with their own style of awesome cinematic gameplay.

The True Sheriff is the highest paying symbol paying out 1,200 coins for each coin bet on the line. The second highest paying symbol is the ‘Bad Guy’, who has a big nose, brown hair, and moustache. Land 5 Bad Guy symbols on a pay line to multiply each coin bet by 900.
Next up is the Sheriff’s assistant sporting a white moustache and a black hat. He will multiply the number of coins wagered per line by 360 for 5 symbols. Next in line is the brunette dame coming in as the fourth highest symbol paying 240 coins for 5 symbols.
Lower down in the pecking order you have A, K, Q, J, and 10 all multiplying the number of coins wagered by 180, 120, 120, 90, and 90 respectively on any line 5 symbols alike symbols connect.

On The True Sheriff online slot there are four main features.
Wild Guns: Land the ‘Gun’ symbol on the center reel for the Wild Guns feature to trigger. You will need to rely on the Sheriff’s accurate shooting skills as he attempts to put a bullet in different symbols on the reels in order to turn them into wild symbols. On a bad day, he will only hit 1 or 2 symbols but on a good day, it could be 3, 4 or 5. Once he has fired 5 shots and symbols have been shot into Wilds, the reels will re-spin while the wilds will remain.
Showdown Bonus: To trigger the Showdown Bonus, the gun will need to land on pay lines 1, 2 or 3 consecutively between both the Sheriff and the Bad Guy. You will be zoomed into a cinematic scene where the game turns into a battle of luck. Flip for ‘heads’ or ‘tails’ to progress higher up the pay scale. Every time you win a flip you will get closer to the top prize, and when you lose a coin flip the field is narrowed until eventually, your winning amount remains.
Double Up Bonus: When a winning combination lands on the reels, then you can choose to ‘Double Up’. Western Style music will blare out as you enter a tavern to play a game of cards in yet another perfectly animated scene. Your only objective is to choose whether the dealer will pull out a red card or a black card from the deck. If you guess correctly, your win will be doubled and you can choose to either ‘Collect’ or ‘Gamble’ again.
The Badge Free Spins: Roll in the scatter symbol, which is the sheriff’s badge 3, 4, or 5 times anywhere in view on the reels to trigger the free spins bonus round. Note that the scatter symbol does not need to be tied to a pay line to trigger the free spins round. The only requirement is that it is visible 5, 4, or 3 times anywhere to award 15, 12, or 10 free spins respectively. During the free spins round, each Sheriff badge that lands on the reels will be added to a badge counter at the top of the slot. When the free spins round ends, the badges are counted and turned into a further bonus prize to be added to your winnings.

In addition to sparking off the free spins round, the scatter also pays out up to 15,000 coins for 5 on the reels. Land 4 for a 1,500-coin reward, and 300 coins if 3 scatters land on the reels.
The True Sheriff Wild Symbol Feature
On the True Sheriff slot, the wild symbol is easy to spot. It has a blue background and white writing saying ‘WILD’. It can substitute for any other symbol in the game. It also has its own winning combination that can pay out a huge 15,000 multipliers of the number coins bet on a line that has 5 wilds. 4 wilds on a line will pay 1,500, and 3 will pay 150 coins per coin wagered on the pay line.