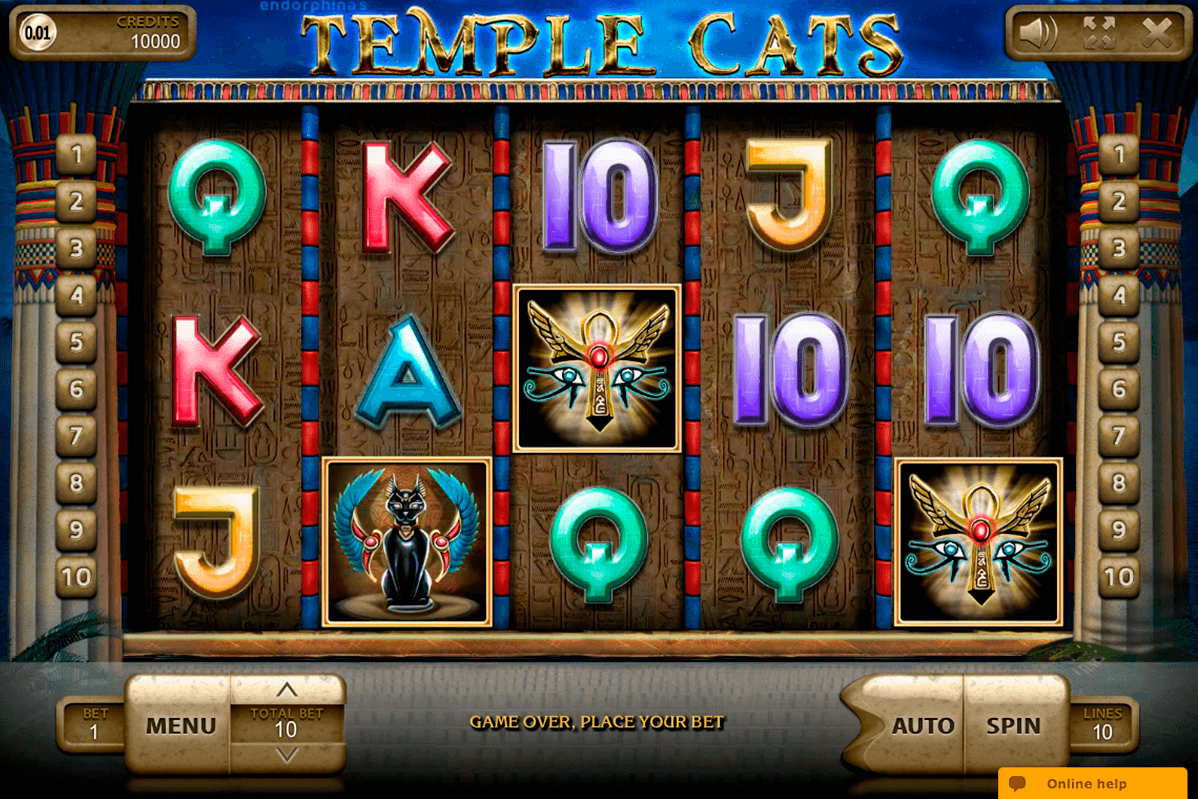 Producer: Endorphina
Display Type: Adobe Flash
Slot Type: Video Slot
Reels: 5×3
Paylines: 10
Temple Cats has been brought to the online casino scene by the world famous Endorphina slot designer. Endorphina has a solid reputation for designing exciting and engaging slots online.
The Temple Cats online slot is themed on a mystic Egyptian theme where cats are considered sacred animals that were mummified after death. This theme brings this ancient culture life with a 96% Return to Play (RTP).
Players will be picking up most of their wins via the scatter symbol, which pays out multipliers of the spin bet, plus launches 10 free games where special expanding symbols will combine with the wild symbol regularly to guarantee players come out of this round with plenty of spins. In the base game, there are also lots of smaller wins to be had as the four highest paying symbols on the Temple Cats slot payout for just two symbols connecting on a pay line.

Excellent graphics and sounds have made this Endorphina slot one of its most popular themes that suit nearly all manner of slot players. 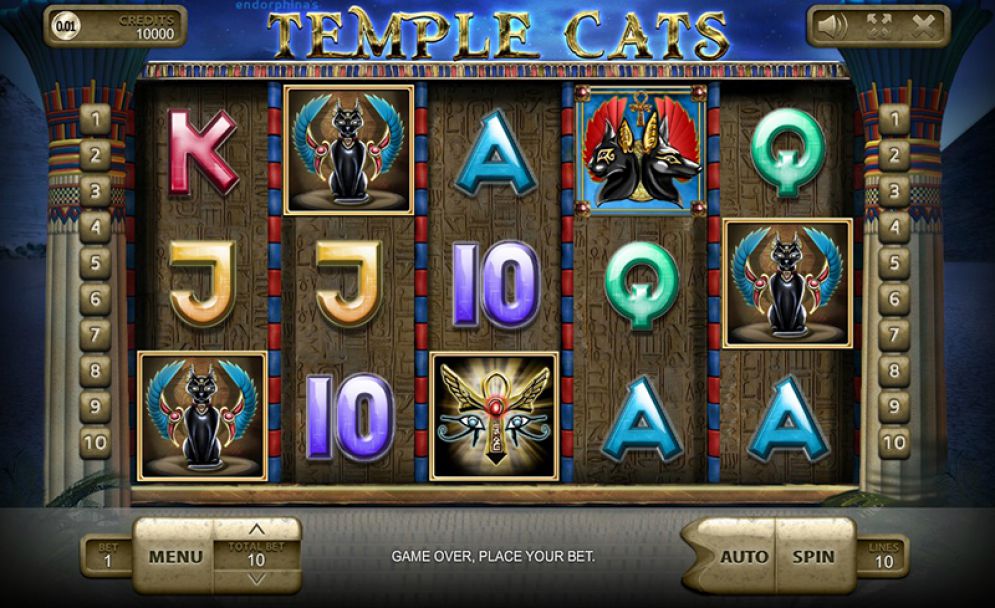 Almost everyone enjoys an Egyptian theme. The theme tune is based on ancient Egyptian music that we are familiar with so nothing new here, but all the same, the music goes with the theme well. The symbols are also very well detailed in design and their appearance on both mobile and desktop look perfect.
The reel spins are very smooth leaving very little room for any lag. Next, when you hit a winning symbol combination, each symbol has its own animation that also works well on mobile. In fact, the detailed graphics and mobile capability of Temple Cats is extremely good.
If you want to change the quality of the graphics in case you are experiencing any lag, then just go to the menu. Here you can change from low, medium to high quality and also adjust the sound effects. For full screen or to turn sounds off completely, there is a toggle option on the top right-hand side of the screen.

On the Temple Cats slot the wild symbol, which is Cleopatra, rules the reign with a 5,000-coin jackpot for five symbols lined up on one of the ten pay lines. If you bet more than one coin, then the payout is multiplied by the number of coins wagers.
For instance, you can bet between 1 and 10 coins per line. If you bet five coins and land five Cleopatra symbols the payout is 5,000 x 5 = 25,000-coin pay-out. This calculation applies to all symbol pay-outs on the Temple Cats online slot. Cleopatra also pays 1,000, 100, or ten coins for four, three, or two symbols on a pay line.
The second highest paying symbol is the sacred cat with the gold collar. 2,000, 400, 40, or five coins are paid out per coin bet on the line for five, four, three, or two symbols respectively. The sacred cat and the sacred cat mask are 2 separate combinations, but both pay out the same amount. five, four, three, or two symbols pay 750, 100, 30, or five coins per coin wagered on the pay line.
The lowest paying symbols are the Ace, King, Queen, Jack, and ten. Ace and King symbol combinations pay 150, 40 or five coins for five, four, or three symbols. The Queen, Jack, and ten symbol combinations pay out 100, 25, or five coins for five, four, or three symbols respectively.

On the Temple Cats online slot there are two main features.
Free Games with Expanding Symbols: The scatter is the two sacred animals (cat and Anubis). Scatters do not have to be on a pay line nor do they need to be on adjacent reels to count as a combination. Land this symbol three, four, or five times anywhere on the reels to trigger ten free spins. In this free spin round, one of the symbols is selected to be expanded to cover three places on the reels. This means there is the potential that this symbol can land on a reel and cover all three positions on that reel thus increasing your chances of landing combination wins.
Take Risk: The classic Endorphina gamble round is also included on the Temple Cats slot. You can enter the gamble round and check the face-up card. If the face-up card is a high card, usually above six or seven, then the odds of winning are against you. This is because you have four face-down cards and you will need to select one of these four cards. If that card is lower than your face-up card, then you lose the round. The higher your face-up card the better. Ace counts as high and joker beats all. If you win, then your winnings are doubled and you can choose to ‘take win’ or ‘take risk’ again.

Cleopatra is a star feature on the Wild Cats online slot. She is both the jackpot symbol as well as the wild symbol. She can substitute for any other symbol on the slot aside from the scatter symbol. If you land the ‘Cat with Blue Wings’ symbol on reel one and line one, but there is no ‘Cat with Blue Wings’ symbol on reel two and line, and instead there is a wild symbol, then the wild symbol will complete the combination as a two-symbol win.