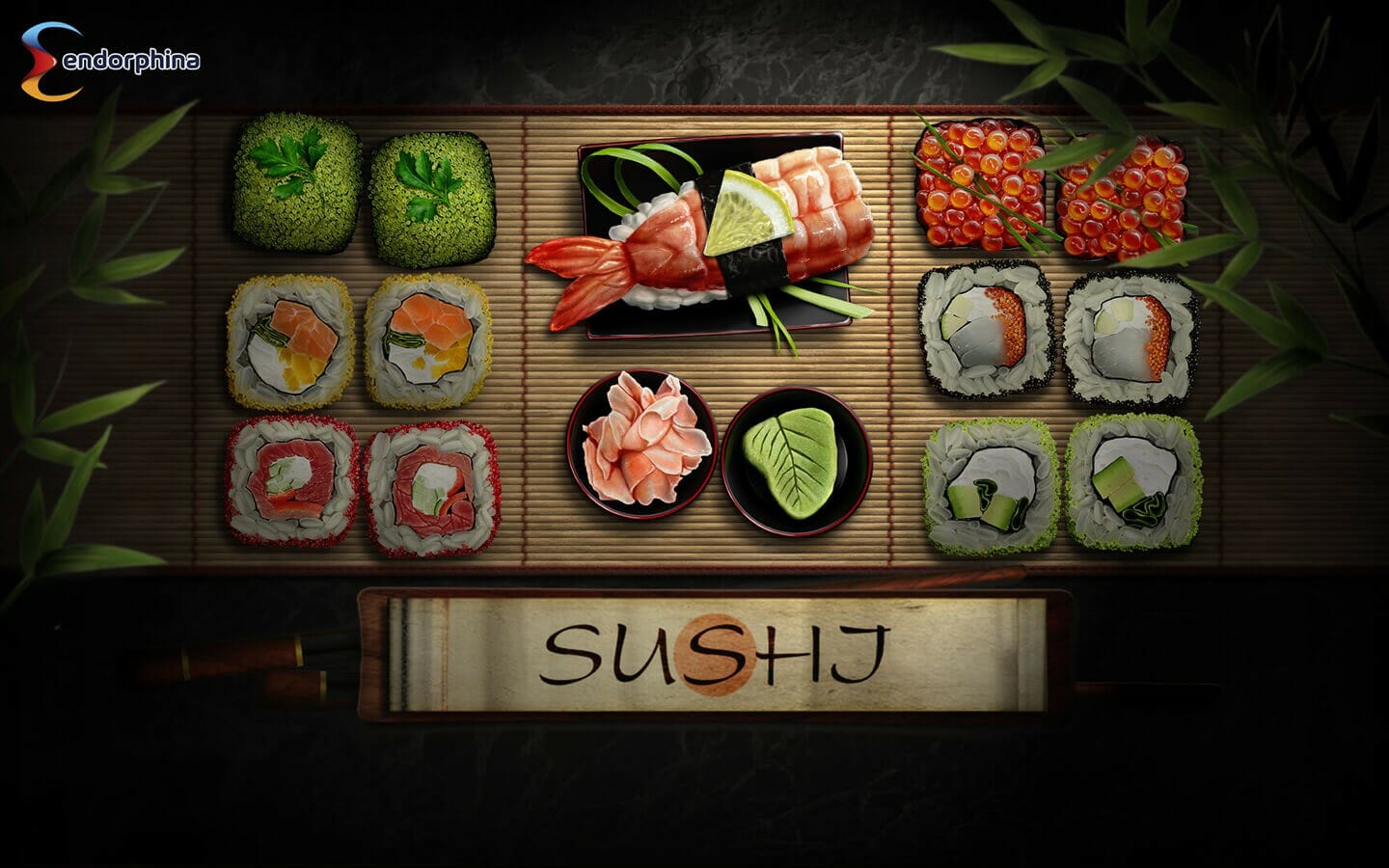 The Sushi slot is an Endorphina production introducing yet another great theme to the real money online slots scene.
Sushi slot is based on (you guessed it) the famous Japanese delicacy of Sushi and also introduces other famous Japanese delights such as Wasabi and Shoga.
Players will enjoy a 96% Return to Player on the Sushi online slot. It is easy to line up plenty of winning combinations, which will regularly help replenish player balances, plus the free spins round having an added wild symbol over 20 spins is incredibly useful. The wild symbol makes all the difference and the fact that there are 50 coins paid out as a reward before entering the free spins game means players will find it impossible to come out of the bonus game empty handed. 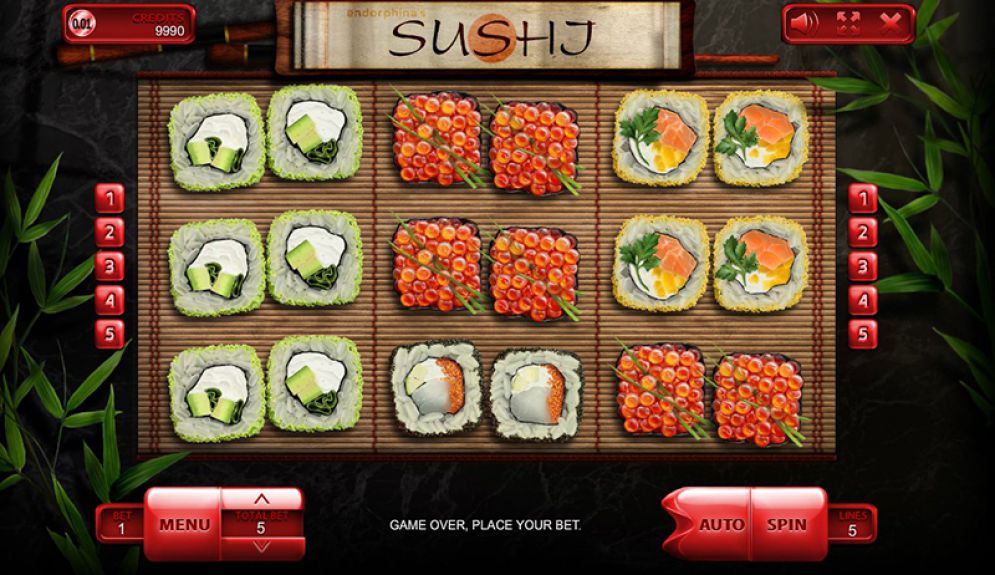 The traditional Japanese theme tune is also a nice touch. It has a meditative and relaxing feel to it that suits the game’s Sushi restaurant theme down to the ground. The representation of the natural sound of life heard in many Japanese style food outlets basically puts the player into a Japanese style restaurant setting where their favorite Sushi menus will be spinning on the reels.
Animations are not the key to making this slot attractive, and so Endorphina has opted to focus more on the smooth gameplay that suits both mobile and desktop play.
If players want to change the graphics settings, stretch the screen, or change the way the sound effects or background sound output, then they can just visit the menu section. This is available on both mobile and desktop. Desktop players can toggle for full screen or turn the sound on or off directly from the main slot game or via the menu.

All symbols pay out as combinations of three. This is the minimum and maximum symbol combination win that players can land. The highest paying symbol is the Wasabi Shoga side dish. Three symbols will pay out 500 coins per coin bet on a line. You can wager between one and ten coins per line. Therefore, if you have ten coins on a line and land the Wasabi Shoga symbol on a pay line, then the payout is ten coins bet X 500 coins payout = 5,000 coins.
The next highest paying symbol is the Jkura symbol. This is the orange Sushi symbol and pays 250 coins for a combination of three. Next is the Tabiko Shake paying 100 coins and then the Maguri Tabiko paying ten coins.
Lastly, you can win 10 coins for three Abokado symbols, which are the green sushi, and the lowest paying symbol is the Hotatekai Tabiko, which is white and orange and pays out five coins per coin bet on a line.

On the Sushi online slot, there are two main features.
Free Games with Shoga Wilds: Spin in three of the 20% Golden VIP Sushi cards anywhere on the reels and you will be awarded 20 free spins. During the free spins round the Wasabi Shoga symbol will become a wild symbol substituting for any other symbol on the game. This is extremely handy because having the wild on the reels makes it super easy to link up symbol combination wins.
Take Risk: Each winning spin will give you the opportunity to double the amount of your win. You can enter the gamble round and look at the dealer’s card before you decide to play. If you do not want to play at this point, then just click on ‘Take Win’ and you can exit. The only reason you would decide not to gamble is if the dealer’s card, which is the face-up card, is a high card. The idea is that you choose 1 of the face-down cards and to win, the card you choose needs to be higher than the dealer’s card. Note that an Ace counts as a high card in this game and the Joker beat any dealer card. In addition to this, the dealer can never have a joker card, so the odds are slightly in your favor if you play your cards with the right odds.

If you land the scatter three times, prior to being awarded 20 free spins, you will be paid out 50 coins per coin bet per line. You can wager between one and ten coins. If you wager five coins and the scatter appears on the reels three times you win 250 coins (five coins X 50).

Only during the free spins round will you have a wild symbol, but never in the base game. The Wasabi Sushi symbol is the wild and will substitute for any other symbol. It can complete the Jkura, Tabiko Shake, Maguro Tabiko, Abokado Tabiko or Hotatekai symbols. In the free spins game, the wild does not substitute for the scatter symbol.