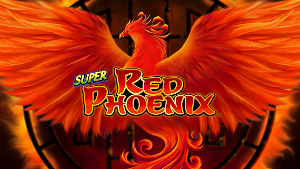 Bally is a world-renowned slot machine manufacturer, and Super Red Phoenix offers us a perfect example of why that is so. The game carries a Far East theme, with the centerpiece being a mythological phoenix that can bring with it massive bonus wins. The game is complete with a number of different ways to win and is straightforward in the way in which bonuses are earned and paid out.
Because the limits are so low on most Super Red Phoenix games, the progressive jackpot displayed is usually correspondingly low. In most cases, the jackpot can range anywhere from a few hundred to a few thousand dollars, with most being on the lower end of that range. The real money can be won during the bonus games, especially because you cannot expect to survive long without triggering one.

Boasting a Far East theme, Super Red Phoenix has many of the mystical and soothing sounds you might expect from such a game, and is generally quite pleasant if you are looking for a more laid-back game. There are a total of 5 reels and 20 pay lines, and being that the minimum wager is usually somewhere around $0.50, the maximum bet per spin is a little more than $5.
There are wilds and special features that can maximize winnings during the base game, but as we have been saying all along, the bonus round is where the big money can be won.

The progressive jackpot is one way to potentially win big when playing Super Red Phoenix, but this really only holds true if you are betting the maximum each spin. Otherwise, it may be a lot of noise and excitement for a rather small win. The biggest winnings undoubtedly happen during the Free Games Bonus. Not only does the fact that there are multipliers mean that massive wins are possible, the chance for additional games to be won means winnings can be in the hundreds of dollars off just a single spin of just a few dollars.

Super Red Phoenix is not the type of game you can expect to see in any high limit slot rooms. With that being said, the maximum bet is more than $5 more often than not, so it is not exactly a penny slot either. All in all, this game is perfect for a middle-of-the-road gambler who wants a bit more risk for the shot at a few different big rewards.

Bally is not necessarily a slot maker known for online games, so you will only find Super Red Phoenix on the floor of brick and mortar casinos. There are plenty of online slots that attempt to mimic the name and gameplay style, but most fall short of Bally’s version. Luckily, the sheer popularity of this slot, and Bally slots in general, means that this game can be found at a large portion of casinos in the United States.