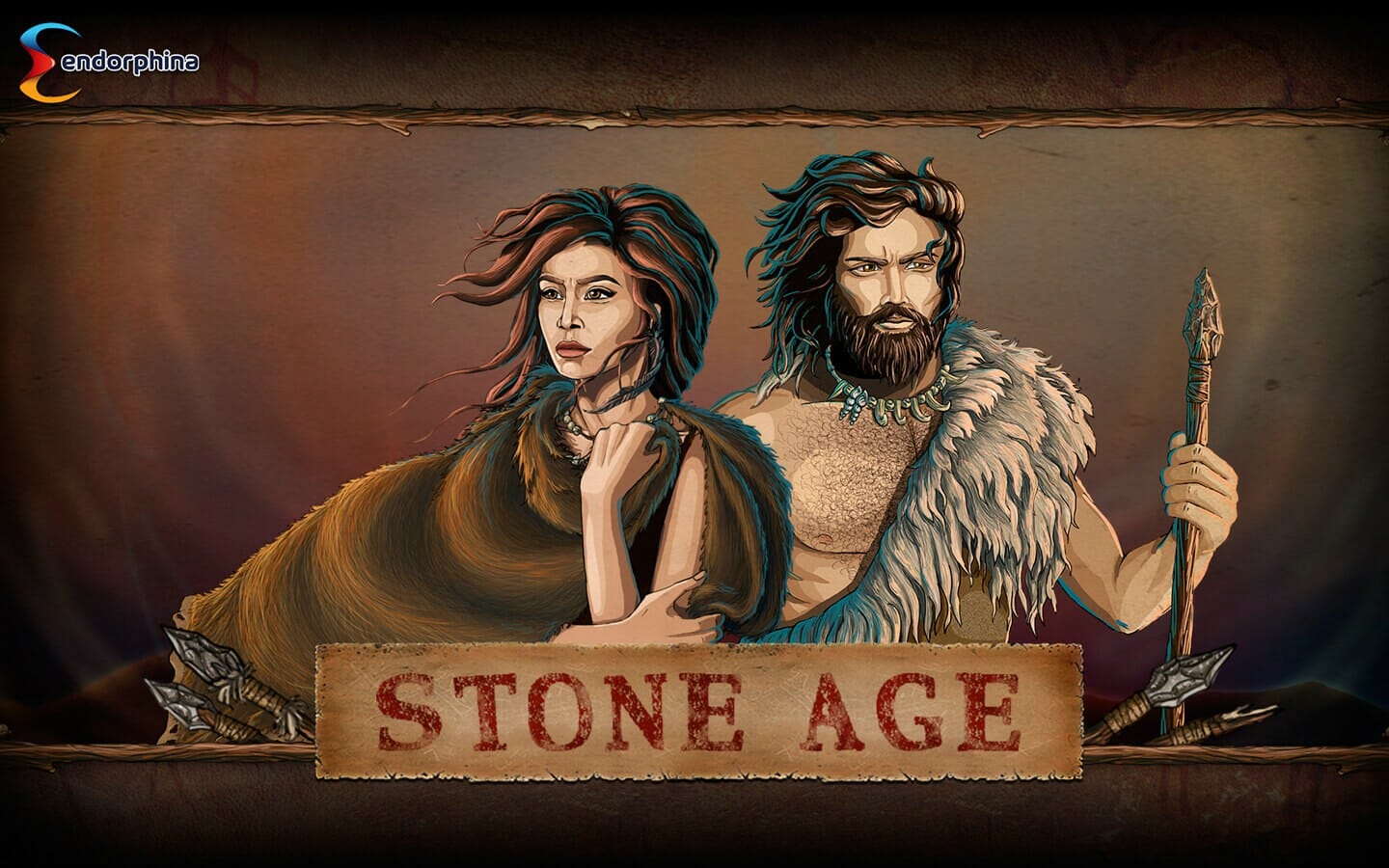 Stone Age online has been released by Endorphina. The slots designer now has a long line of themed slots ranging from ancient slot themes to more modern themes reaching out to a wide audience and gaining popularity on the online slots scene.
The Stone Age 3D online slot takes players back on a journey into a prehistoric period where man first roamed the earth hunting some of the world’s largest mammals including the mammal.
Scatter symbols are the most important feature for players on the Stone Age online slot as they pay out coins for landing three, four or five symbols and also launch ten free spins where there are expanding symbols. With the wild involved, the expanding symbol will almost certainly bring players plenty of combination wins from the free games. The wild is also useful in the base game thanks to there being four symbols that payout for just two on a pay line.

One of the best and instantly noticeable aspects of playing this slot is the way the reels and background have been designed. The stone aged style reels and symbols add authenticity to the theme taking you back to a prehistoric world on a digital setting. 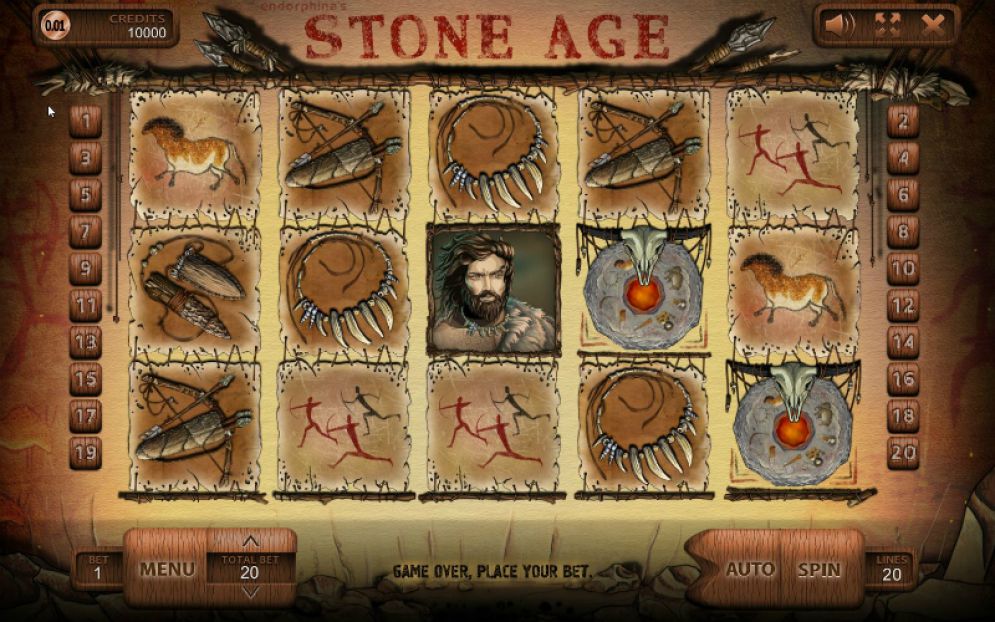 As with most of the modernly designed Endorphina slots, the 3D graphics have been designed perfectly. There is not much of a theme tune per say and instead eery background noises indicative of the stone age. It makes the slot pretty easy to play and if you have the volume pumped up to the max, you will feel that slot gives out a stone age vibe.
There are animated symbols that come alive when the symbols connect to pay out and overall the gameplay is very smooth on desktop and mobile as with all Endorphina designed slots.
Options to toggle the sound or set the screen to widescreen are available on the main screen or you can fine tune the graphics and sounds further from the menu.

The mammoth is the largest beast in the game and also the highest paying symbol. Payouts are calculated per coin bet on a line on the Stone Age slot.
As an example of this, if you land five Mammoth symbols, you will be paid 5,000 coins per coin bet on the line. Therefore, if you wager two coins, the payout for five symbols is the 5,000 coin reward x two coins bet on the line = 10,000 coins. The Mammoth also pays 1,000, 1,000, 100, or ten coins for four, three, or two symbols so with two coins bet on the line the payouts would be 2,000, 200, or 20 respectively.
Below the payout per coin will be listed in which you can easily calculate the payout yourself per coin bet on the line using these figures. FYI – you can place between one and ten coins per line.
For the second highest symbol, look out for the Caveman. He pays out 2,000, 400, 40, or five coins for five, four, three, or two symbol combination wins. Next are the Cavewomen and the Axe symbols. They pay out equal amounts. Five, four, three, or two symbols on a pay line pays out 750, 100, 30 or five coins.
The 2 lowest paying symbols ate the bow and arrow set and the cave paintings with a tooth necklace. The bow and arrow set pays 150, 40, or five and the cave painting pays 100, 25, or five for five, four, or three symbols on a pay line respectively.

On the Stone Age online slot, there are two main features.
Free Games: Land three or more ‘stone wheel with a skull’ symbols anywhere in view on the reels to trigger ten free spins. This symbol does need to be on a pay line or adjacent reels to count as a win. Anywhere in view on the five-reels will do. At the beginning of the free spins game, one of the symbols will be randomly chosen as the expanding symbol. The symbol will expand if there are enough symbols on the reel for it to expand an complete a winning combination. The free games feature can also be retriggered as scatters are present in the bonus free spins round too.
Take Risk: After every win or at the end of a free spins round, you have the choice to ‘Take Risk’. This feature is always worth a look because even if you click ‘Take Risk’ from the base game when you are in the gamble feature, you can still opt to exit. The best reason to exit is if your card is too high. To explain further, the game presents you with one face-up card and four cards that are face-down. You need to pick one of the face-down cards. If that card is higher than your face-up card, then you win. Therefore, you should only gamble if you have a card that is six or lower to swing the probability of odds in your favor. In addition to this, after every win, you have the option to continue to gamble.

Scatters are some of the most useful symbols on Endorphina slots. Three, four, or five can land anywhere in the reels to count as a winning combination. You will then be paid 40, 400, or 4,000 coins respectively. This is essentially the second highest paying combination in the game and the easiest combination to land.

Wild symbols can substitute as any other symbol on the slot except for the scatter symbol. You can count the wild to also be any one of the six other symbols on the Stone Age slot. This means that if the wild lands inside, at the beginning of or on the end of any matching symbols, it will also count itself as one of those symbols. As a result, the wild helps to complete, begin, or extend symbol combinations.