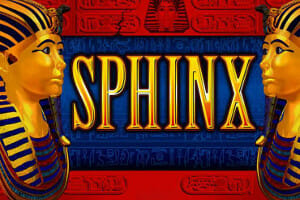 Sphinx is an immensely popular Egyptian-themed video slot game manufactured by IGT. Within its Sphinx catalog, IGT makes several different game variations, most of which can be played on True3D™ machines that feature cutting-edge 3D graphics. It is usually only available as a penny machine, though it can sometimes be found in higher denominations. The main draw of this game is its linked progressive jackpot and variety of interactive bonus features.
At virtually every major casino, you will be spoiled for choice when it comes to playing slots with Ancient Egyptian themes. Some of today’s most popular slot games feature themes designed around Egyptian mythology and include images of cleopatra, pyramids, the sphinx or other symbols. Few of these games, however, are as exciting or interactive as IGT’s Sphinx slot machine.


Click Here to Play Slots at Our Top Rated Casino!
Today, Sphinx can be found at many casinos in the United States and all around the globe. The Sphinx video slot machine and its True3D™ gaming platform have even received several notable awards. These have included the Gaming & Technology Award for Best Slot Product of 2014, the 2014 SLOT Floor Technology Award and was placed in the 2013 Top 20 Most Innovative Gaming Technology Products.

The Sphinx 3D™ slot machine is available on IGT’s True3D™ cabinet and offers up 5-reels with 30 paylines. This system utilizes the latest in 3D gaming technology and HD graphics for an immersive slots experience. The IGT True3D™ system tracks a player’s eye movements so they can intuitively change the viewing angle while playing the game.

Sphinx 3D™ slot machines offer up the opportunity to land one of several exciting bonus features. In fact, Sphinx 3D offers up a total of 7 bonuses – 2 within the base game and 5 more within the bonus round itself. To trigger the Sphinx Bonus, a player will need to land 3 Sphinx symbols on reels 2, 3 or 4 during the base game (these are the only reels equipped with Sphinx symbols).

This feature is only offered on reels during the main Sphinx bonus feature. If you are awarded Ramosis Free Games, you will receive 20 free spins with a special 2x multiplier.

If a player triggers the Diamond Chamber Bonus, they will get to choose one of the diamonds on the top screen. The diamond symbols will reveal either credits, multipliers, or extra bonus games which are awarded to the player.

The player can choose up to three symbols on three magic wheels. With the True3D™ platform, players can look around and behind the wheel to peek at values before making a selection.

Though it is not available on the True3D™ platform, this variation of Sphinx offers stacked symbols in addition to the X-TENSION™ Wild feature. Players can also receive up to 600 spins during the Free Games Bonus. Landing pyramid scatter symbols on any 3 reels will trigger the Free Games feature. Before the bonus round begins, players must choose symbols randomly to reveal the number of free spins and a win multiplier.

The Volcano Island™ – Sphinx Wild™ slots are another popular variation of the Sphinx family. The most notable feature on these machines is that they offer players the opportunity to win additional in-game jackpots by hitting Joker symbols on any reel.