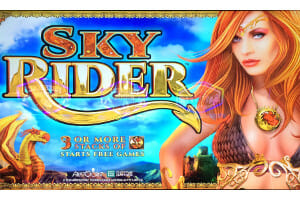 Sky Rider: Golden Amulet is a game made famous by Aristocrat after being introduced back in 2013. If you have seen the Sky Rider slot before, be aware that Golden Amulet is just one of two versions; the other being, Silver Treasures. There are subtle differences between the two games, however, this will be a review of strictly the Golden Amulet variety of the game.


Click Here to Play Slots at Our Top Rated Casino!
The game itself takes on an adventurous, almost Zelda-like theme, with a female heroine as the centerpiece of it all. There are other mythological symbols, but it is important that you do not get too distracted by the elegant graphics because this game can beat you up in a hurry. This penny slot has a massive house edge, so it often times takes some patience in order to come out on top. There are a few bonus features that can help soften the house edge, but this game has reportedly been a tough one to conquer.
Sky Rider: Golden Amulet is a five-reel slot game with three symbols on each reel. In addition to poker symbols nine-A, symbols include both orange and blue dragons, an ancient book, a golden compass, the main heroine, and the Sky Rider logo.
While it isn’t necessarily a bonus round, the Sky Rider: Golden Amulet game is one of the first Aristocrat offerings to feature “Max Stacks.” Prior to each spin, a full reel of stacked symbols will be added to one of the reels. If you see one of the higher-paying symbols stacked, your odds of a heftier payout increase.

Length of Bonus Round

In all honesty, the Free Games Bonus on Sky Rider: Golden Amulet slot games is not very time-consuming at all. First and foremost, the minimum amount of free spins able to be won is nine, and that number of spins will take up no more than a minute or two. If you do happen to unlock all thirty-six free spins, there will be a bit more of a time commitment, but even then the bonus round will not take any longer than a few minutes.