Shadow of the Panther Slot Machine 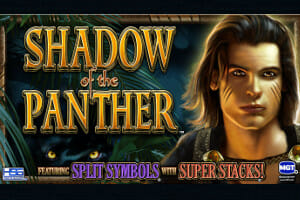 Shadow of the Panther

Shadow of the Panther is a popular IGT video slot machine. This game has an alluring, mysterious feel to it that seems to be taken straight out of the Amazon. There is a lot of rain forest imagery, jungle cats, and gemstones to make this penny slot as exciting as it is mysterious. Though Shadow of the Panther is a penny slot with a significant house edge, bonus features afford you the opportunity to offset that edge.


Click Here to Play Slots at Our Top Rated Casino!
Shadow of the Panther is a 5-reel slot game that loads three symbols onto each of the reels. An interesting feature of this game is known as Super Stacks and turns a single symbol into a two-in-one. This will be explained later, but essentially it allows players to maximize an otherwise normal winning spin.
As far as the symbols utilized by Shadow of the Panther are concerned, you will find emerald, ruby, and sapphire gemstone symbols, jungle cat symbols, Q-A poker card ranking symbols, and an Amazonian warrior symbol. There is another symbol that looks similar to the Amazonian warrior, however instead of a human head, the symbol has a human’s body and panther’s head.

As was mentioned above, there are some bonuses available for this slot that can really amplify winnings. The bonuses are simply to follow and explained in full below.

Shadow of the Panther is like a lot of other penny slot games in that it features a Free Games Bonus. In order to trigger the Free Games Bonus, a player must show five Amazonian warrior (with a panther’s head) symbols anywhere on the reels. Upon doing this, you will be awarded five free games.
The number of free games increases to seven when six Amazonian panther head warrior symbols are shown, 10 with seven symbols, and 15 free games if you unveil 8 of the symbols. Unfortunately, additional free games cannot be won during the Free Games Bonus.

Another interesting feature of Shadow of the Panther is Super Stacks. Essentially, every one of the five reels contains stacked symbols that, when revealed, will consume every position on the reel in question. What this does is help a winning spin satisfy more paylines, thus giving the player even more in winnings. It must be noted that there is a Super Stack feature that exists during the base game as well as one that exists during the Free Games Bonus.

Like many IGT slots, you can play Shadow of the Panther slots online for real money at a range of regulated online casinos in Nevada and New Jersey. For those that might only be looking to play this game at a brick and mortar casino, there are plenty of free demos that allow you to get a feel for the game without putting any of your own money at risk.