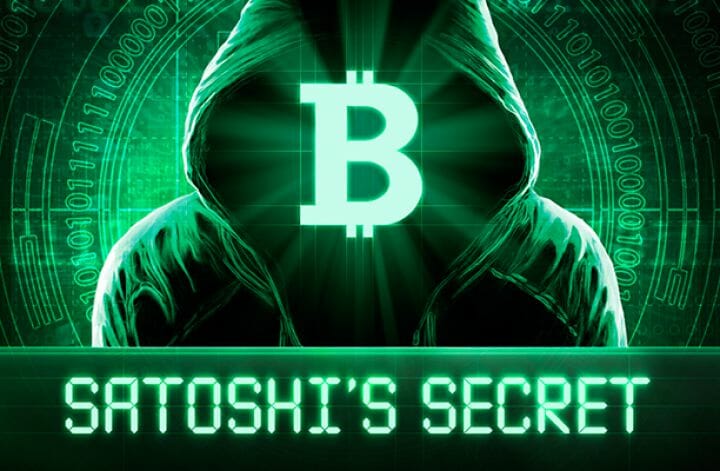 Satoshi’s Secret is an online slot from the excellent software developers at Endorphina, a team that is quickly making a big name for itself.
This online slot has a unique six-reel format and is both ways to win slot that allows wins to be created from right-to-left as well as left-to-right. It also has an RTP of 96% which is standard across all Endorphina slots, three bonus rounds and a very interesting them that is based on cryptocurrencies.
The trading bonus round on Satoshi’s Secret is definitely the one you will want to unlock the most as it will have you speculating on the futures of the games three main currencies.

Themed around a world of digital technology and cryptocurrencies, the graphics certainly play their part on Satoshi’s Secret. Everything has all been drawn in a digital manner and while the graphics are quite simple, they are still very effective at immersing you into the theme.

As for the soundtrack and sound effects, these are all very digital as well and fit perfectly within the theme. Beeps and other computerized sounds ring out frequently as the wheels spin and the winning combinations land upon them.

Each of the symbols on the reels of Satoshi’s Secret is obviously connected to cryptocurrencies and the blockchain technology behind them.
Satoshi himself is the highest paying symbol on the reels of Satoshi’s Secret and it is worth 5,000x the line bet if you find the full six symbols on an active payline. 3,000x, 500x and 100x the line bet can also be won when you land him five, four and three times respectively.
The British pound sign is the next most valuable symbol and you can earn 3,000x, 500x, 200x and 50x the line bet when you have found it six, five, four and three times in a winning combination.
Up next is both the Euro and US dollar symbols which are worth the same in terms of payouts. Either one will earn you 1,000x the line bet for landing six of them across an active payline. 300x, 100x and 30x respectively is what you will win when they are both landed five, four and three times.
The lower value symbols on the reels are the QWERTY letters with Q, W, and E being where the higher payouts can be found. They will all bring a maximum payout of 300x the line bet when six of them are found in a winning combination.

There are three bonus features that you can take advantage of in Satoshi’s Secret:

If you land the games bonus symbol on the reels anywhere in view in four separate locations, you will open the trading game in which you have the chance to gamble on the value of the three main currencies.
You can either select to take the profit you have already won for activating the round or choose whether one of the three currencies will either gain or fall in value. If you choose the latter, the reels will keep spinning and altering the value of the currencies.
You need to keep an eye on the value which will determine the amount that you win and if you want to stop the reels spinning at any time, you have to click the ‘auto spin’ button and can then take the amount that is shown.
If you do not take any wins and the value falls to the bottom of the scale, you will have earned no profit and the bonus round will end.

Another interesting game is the QWERTY bonus which is activated when you land each of those symbols in the correct order across all six reels. Once you have managed to do so, you can attempt to hack three accounts.
The account with the green security level is the easiest and will have the most chance of success while yellow and red will have decreased chances of success. You will attempt all three and can choose which order you would like to do so. After you have tried to hack all three accounts, the round will end and you will be paid out for each of them that you were successful at hacking.

You will generally find a gamble feature on most of the slots from Endorphina and that is the case again with Satashi’s Secret. Each win on the reels can be gambled in a double or nothing game against the dealer.
You are tasked with selecting a card from four options in the hope of finding one that is higher than the card already displayed. If you manage to do so, you will have doubled your winning that you landed on the reels. You can then opt to have another turn if you so choose and can actually double up ten times if you are brave enough.
Anytime you lose against the dealer, however, you will lose the lot.

The wild symbol on Satoshi’s Secret is the symbol with ‘wild’ written on it and as you might expect, it will substitute for most of the standard symbols on the reels when winning formations can be created. It will not be able to substitute for the bonus symbol or the games highest paying symbol of Satoshi.