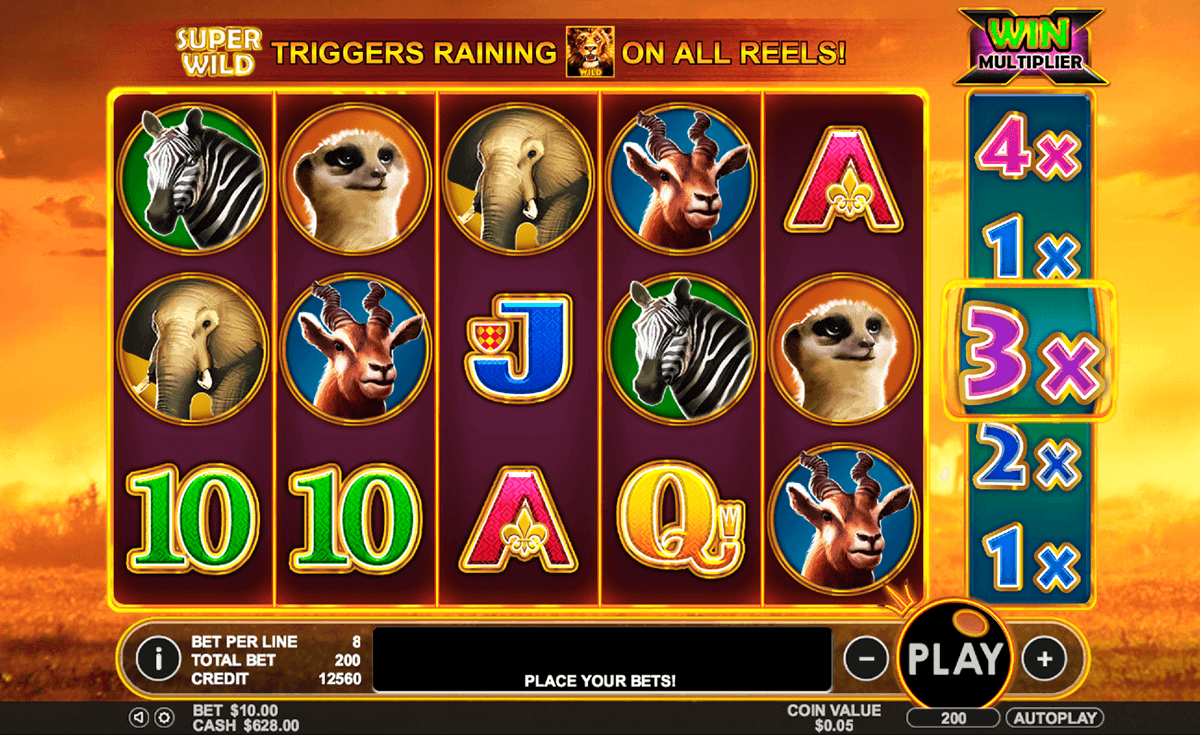 The Safari comes to the real money online casino scene thanks to Endorphina slot developers. Over time Endorphina popular slot themes have become a household name in countries such as the US.
Safari takes players deep into the African wilderness mixing slots play with the magnificent wildlife of one of the world’s most beautiful landscapes.
Most of the wins on the Safari slot will come from the Lion symbol and wild connecting as the Lion symbol is stacked two, three, and four times on the reels, plus it will pay for just two on a pay line. There are in fact three symbols paying out for combinations of two, so there are plenty of opportunities to link up with the wild symbol here. The free spins round will be player’s main source of cash when in search of big wins thanks to the stacked wild symbol.

It must be said that Endorphina has really gone out of their way to create an amazing 3D slot taking players straight into the heart of the African plains.

First of all, the sounds effects and theme tune are brilliant. African style chanting in the background with drums rolling as well as the noise of the African bird species gives the slot an ambiance that warms up the screen.
Equally, warming is the yellow tropical colors, animations in the background, and the well laid out 5×4 reels depicting an old-style African adventure. Africa is often associated with adventure and the Safari slot has an adventure of its own.
The crystal clear 3D graphics and symbols mix together perfectly with the theme tune and sound effects, plus the animations have been perfectly executed. Every time a symbol combination is landed, the animated effects come into action with the wild symbol animation stealing the show.
Arguably, this is one Endorphina’s best slot designs yet. Also, the slot works perfectly on mobile and desktop too. Players will also be able to use menu options to change the graphics quality as well as sound options. This includes stretching the screen or turning the theme tune or background sound volumes up and down.

Payouts are according to how many coins you play per line. In this section, the pays outs described are for 1 coin. You can wager between one and ten coins, so you will need to multiply the payout below by the number of coins you plan to bet per line.
Joannes Leo Africanus is the king of the jungle, and of course, this is the Lion paying out 1,000 coins for five symbols. For four, three, or two symbols, the payout is 200, 40 or ten coin respectively. This symbol is the jackpot symbol and is also stacked two, three, or four high on the reels.
For the second highest paying symbol is Africa’s largest mammal; the elephant a.k.a. Loxodonta. Also, the Syncerus Caffer (Buffalo) also pays out the same amount. Land five, four, three, or two symbols for a payout of 500, 150, 40, or four coins.
The Rino (Diceros Bicornis) and the Zebra (Hippotignis), as well as the safari hat and camera symbols all, pay out 400, 50, or 20 coins for five, four, or three symbol combinations.
Finally, the compass, binoculars, suitcase, and map are the lowest paying symbols. Combinations of five, four, or three will pay out 200, 30, or ten coins per coin bet on a line.

On the Safari online slot, there are two main features.
Free Games with Stacked Wilds: The map of Africa is the Safari online slot’s scatter symbol. This symbol is only located in reels one, two, and three. As long as there is one symbol on each of the three reels the scatter is found, ten free games will ensue regardless of the position of the scatters. During the free spins game, the wild symbol will be stacked. With 50 reels, plenty of symbols to combine and a stacked wild, you are sure to exit this round with a nice win amount.
Take Risk: Play the dealer in a game of high/low to double your winnings. When you land a win on the reels, you can ‘take risk’. The dealer will already be showing a face-up card and offers you the choice of four face-down cards. To win, the card you pick must beat the dealer. The Ace counts as a high card and there is also a joker, which beats all dealer cards. To make things even better, the dealer will never show a joker. This means if you gamble when the dealer has a five or lower, the probability will be in your favor. If you win, then your prize will be doubled, and you can choose to gamble again if you like the odds versus the next dealer card. As a side note, even if you clock ‘Take Risk’ in the base game after a win and then enter the gamble feature, you can exit straight away if you do not like your odds versus the dealer.

The scatter is only on the first three reels. Three scatter symbols anywhere on these reels after a spin will not only award free spins. Before the free spins bonus, you will be paid out 200 coins per coin bet.

Look out for the envelope symbol as this is the wild symbol on the Safari online slot game. It is the wild card for all other symbols on the slot except for the scatter. Therefore, if you land the Lion symbol four times on a pay line, and the wild symbol is on the same pay line, then the wild will also become a Lion symbol giving you a five symbol combination. The wild can also connect symbols to form a winning combination by acting as a wild card on any of the pay lines.