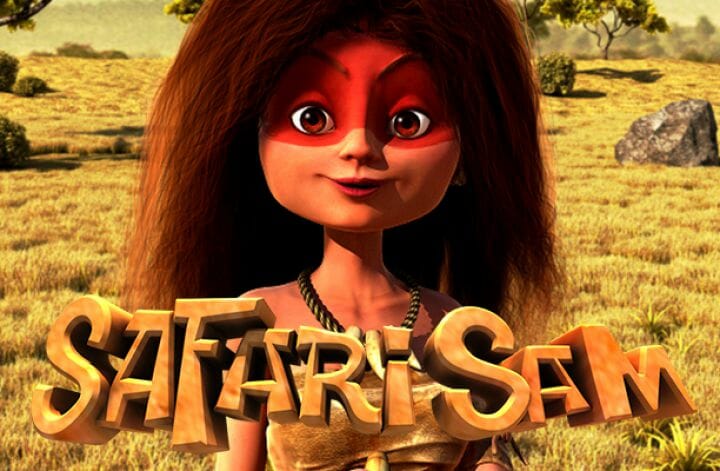 Betsoft has always focused on developing online slots that are graphically impressive. With Safari Sam they continue that tradition as this 3D video slot has splendid graphics and flawless animations.
Themed around Sam and his adventures through a safari on the Savannah, Safari Sam is an online slot that carries a number of lucrative features. Random wilds, collapsing symbols, and free spins are just some of the game features you can expect to see.
Safari Sam is a medium variance slot that pays out fairly regularly and offers good value with an impressive RTP of 97.5%.

Betsoft is renowned for producing attractive slots and Safari Sam certainly carries on that tradition. In fact, it could be argued that the graphics are just a little too heavy. They certainly use up quite a few system resources and unfortunately cannot be toned down. Nonetheless, animations and cinematic effects on Safari Sam are fantastic. Sam himself is standing to the right of the reels and performs a number of actions as you spin the reels. 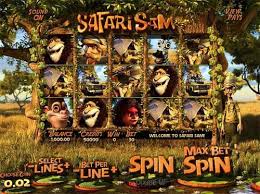 As for the symbols on the reels, the graphic design is well executed. When you land winning combinations on the reels, there are some splendid animations from within the winning symbols that are also quite amusing.
The soundtrack on Safari Sam also helps you to immerse yourself into this jungle theme and you hear Sam himself as he performs his actions. A female character keeps surprising him and vanishing which often leaves him mumbling to himself. If the soundtrack starts to get a little annoying, there is the ability to turn them off at the top left of the screen.
All being told, the quality of the graphics and sound on Safari Sam are as good as you will get from an online slot. We do suggest only playing this online slot on computers or mobile devices that have good specs for maximum performance.

On Safari Sam, the symbols on the reels are all theme-related. The slots highest paying symbol is a headshot of Sam himself and he will pay 500x the line bet should you land him 5 times across a payline. Finding 3 and 4 of him in a winning combination will give you 100x and 200x your line bet respectively.
The interesting lady character that Sam is hunting is the next highest paying symbol and she will award 300x, 150x and 50x your line bet when landing her 5, 4 or 3 times correspondingly.
A lion is the third highest paying symbol and pays 100x, 50x and 20x the line bet when you manage to land it 5, 4 or 3 times across a winning payline.
The Gorilla, Zebra and Monkey symbols all share the same payouts with 5, 4 or 3 of each of them in winning combinations awarding 50x, 20x and 10x the line bet respectively.
Finally, you have the tent, jeep and sleeping Sam symbols that also share the same payouts. These will pay 25x, 10x and 5x the line bet when you land them 5, 4 or 3 times consecutively on a win line.
There are also scatter symbols on the reels which are the tree symbol. These scatter symbols when found 3, 4 or 5 times anywhere on the reels will bring you payouts of 3x, 5x, ro 10x times your spin bet.

There are four different game features on the Safari Sam 3D video slot.
Wild Animal Free Spins: Landing the Gorilla, Zebra, and Monkey together across an active payline will activate this feature. You will be awarded up to 10 free spins and are tasked with selecting one of those animals. The selected animal will then have each of its symbols on the reels turned into a 2x wild multiplier for the duration of the free spins round.
Random Wild Multipliers: Wild symbols on Safari Sam are a little different to wild symbols you will usually see. These Wild symbols appear randomly on the reels after a spin. Note that they are not on the regular reels and instead they are added as additional symbols. They each have different multipliers attached to them. It is possible for these wilds to have 2x, 3x, 5x or 10x multipliers for any wins that they help to create.
Safari Sam Bonus Game: Essentially a pick me game, this bonus feature is activated when you land three or more bonus symbols anywhere on the reels. This symbol is represented by Sam looking through his binoculars. You first decide on a location to send Sam. Then you keep choosing specific animals that reveal random credit rewards. This bonus game continues until you find the ‘collect’ symbol which will end the round and send all wins earned to your account balance.
Double Up: Each win on the reels can be doubled up at the end of the spin. By clicking the ‘Double Up’ button that is located directly below the ‘spin’ button, you will be taken to a fresh screen. Here you can choose either heads or tails before a coin flips. Guess correctly and you double your winnings but guess wrong and you will lose it all.
Collapsing Symbol Stacks Feature: The most common feature on Safari Sam is the Collapsing Symbols Stacks feature. Whenever a reel is filled entirely with the same symbol, you will be awarded the same payout that the symbol would payout should you land it 3 times on an active payline.
The 3 symbols will then collapse and become one single symbol at the bottom of the reel. An additional 2 symbols will then drop into the empty space with the potential to land further winning combinations. There is also the possibility of a chain of wins to come via this innovative game feature.