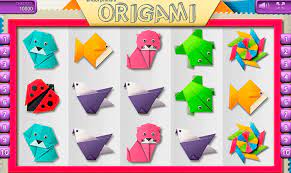 Producer: Endorphina
Display Type: HTML5
Slot Type: Video Slot
Reels: 5
Paylines: 10
Origami is an online slot that was developed by Endorphina, a software developer that is fairly young but certainly has a great future.
This online slot has 5-reels, 10-paylines, a return-to-player percentage of 96% and a couple of lucrative features that could just land you some big and impressive payouts. Classed as a high variance slot, Origami contains good graphics, flawless animations and will no doubt lead to an entertaining experience as you spin the reels.
Origami is themed on the wonderful art of the same name which is the art of folding paper which originated from Japan. Animals are the main creations but you would be amazed at the shapes, possessions and other items that can be created by the worlds best paper folders.

Endorphina like to keep their online slots looking as good as possible but without going over the top in a graphical sense. They want their slot to be pleasant to look at but not too resource hungry in such a way that it will affect the performance when being played on the various mobile devices that players will use.

Saying all that, the graphics are certainly of a decent standard and the animations are cute on the eye and smooth when running. The multiplier Origami cat springing on to the reels is the most notable of these animations and also the most lucrative of them as well.
The soundtrack on Origami is actually quite catchy and the cuteness in the music matches perfectly with the cuteness of the symbols on the reels. As for the sound effects as the reels spin, you can hardly hear these which will split opinions as to whether that is a good or bad thing.

On the reels, you will notice that all of the symbols are different Origami designs with the most valuable of them being the multi-colored spiral. That symbol will be worth 500x the line bet to any player that manages to land it five times in a winning combination while rewards of 100x and 20x will be given to you when you land it four and three times respectively.
Big Lord the dog and Kitty the cat are the next two higher paying symbols and they both have the same value. 300x, 60x and 10x the line bet is rewarded for landing these symbols on an active payline five, four or three times respectively.
The goldfish and the bird are the next symbols you will want to see after those above and these are also worth the same value as each other. Five of either symbol found in a winning combination will bring 200x the line bet and four and three of them respectively will give you a payout of 40x and 5x.
A magic frog and ladybird are the slots lower paying symbols and the best you can hope for from either is 100x the line bet if you land five of them in a winning combination.

Origami by Endorphina has two bonus features that players will be eager to hear about:

The random multiplier feature is not really a bonus round as such and is instead what it sounds like it is the name that it has been given. On any random spin, the Origami cat can spring out from behind the reels and give you a random multiplier on any wins that you might secure.
This cat can give multipliers of up to 50x on any wins that will land once the reels stop. As you can imagine, if there are multiple big wins on the reels at the same time as one of these multipliers, you are going to be banking a nice handsome payout.

The only other feature of note on Origami is the gamble feature. Once a win has landed on the reels after a spin, you are given the chance to click ‘take risk’ which will take you to a fresh screen where you can play a game of double or nothing.
In that game, you can choose from four different playing cards in the hope of finding one with a greater value of the one that is displayed on the left-hand side of the screen. If you are successful, the amount you won on the reels will be doubled up and if you lose the round ends with you losing everything.
If you feel lucky enough, you can actually try and double up successfully as many as ten times. It would take some luck for you to manage that but the rewards will certainly be great. Also, if you ever land a joker on the reels, that is a good thing as that card will beat any card that the dealer has.