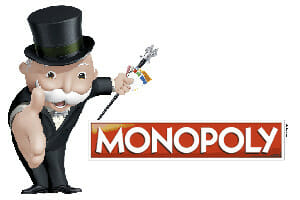 Monopoly video slot machines have been some of the most popular in casinos for many years, successfully competing with other games like Wheel of Fortune and Top Dollar. The Monopoly theme is so popular that it comes in both video and reel slot machine games. Today the penny and nickel video slot games seem to be the most popular.


Click Here to Play Slots at Our Top Rated Casino!
Depending on the casino that you’re visiting, you might see up to 4 current Monopoly video varieties along with a few different reel slot machines and even older Monopoly slot games that remain popular despite their age. Current Monopoly video slot games include Big Money Reel, Epic Monopoly, Prime Reel Estate and Monopoly Legends.
Each Monopoly game from WMS uses different technology and has a different cabinet. The different software and different cabinets offer a variety of gameplay for each Monopoly video slot machine. There are enough options of gameplay in this singular brand to offer something intriguing to just about any slot machine player. Each game offers multiple ways to win and multiple bonus rounds to achieve huge jackpots.

The Big Money Reel game allows you to collect different denominations from the reels for some nice wins. However, spinning the big wheel is where you’ll find free games and the large jackpots that can be well over 10,000 credits per spin.
When you play Epic Monopoly you’re spinning video 4 reels at the same time. This gives a huge chance for some epic bonuses and even more epic jackpots. Bonus rounds with Epic Monopoly allow you to spin the big wheel, run around the Monopoly board, win free games, more spins of the wheel, more rolls of the dice, multipliers and that’s just the beginning. There are a lot of bonus rounds with Epic Monopoly.
Prime Reel Estate Monopoly is a new kind of game for WMS and the Monopoly series. Multiple bonus rounds include a pinball-style free spin game, dice rolling to play the Monopoly board, drag to win bonuses and massive multipliers to increase your jackpots by as much as 25x your wager. Land on Boardwalk while you “play the board” and you could win up to 10,000 credits.
Like the other games, Monopoly Legends has multiple types of bonus games. You can win free spins using this game’s unique video reel configuration. There’s also big wheel bonus which may land you in a bonus game that features characters and games from other WMS video slot games like Goldfish and Zeus.

Most of the Monopoly video slot machines are offered in the penny or nickel denomination. This means that credits are generally worth either a 1 cent or 5 cents depending on which game you’re playing. So, when you’re winning big jackpots for 100,000 credits you’re actually winning $1,000 or $5,000. Regardless, neither of these jackpots is anything to be upset about. The jackpots grow even larger when you have a max bet where you may win 50,000 credits and then turn it up with a 20x multiplier to make for a massive jackpot.
The best part of the Monopoly Big Money Reel game is the chance to win free spins on the bonus game reel. This is where the real jackpots are found. Multiple bonus round jackpots add up and allow you to play longer and have more fun. Playing any of the Monopoly video slot machines is fun and the smaller bonuses are nice. The extra money in your bankroll allows for even more chances to win the really large jackpots. After all, big jackpots are why we play the games.