Producer: Endorphina
Display Type: Adobe Flash
Slot Type: Video Slot
Reels: 5×3
Paylines: 10
Macarons online slot is part of the Endorphina slot collection. Endorphina is consistently designing new slots with new exciting themes adding to their growing catalogue of popular online slots.
This online slot is a 3D slot themed on a romantic French journey where the French sweet meringue-based confection has been associated with love and passion.
Landing the scatter symbol to open up the free spins round that pays out four times multipliers on all symbol combinations is where the lion’s share of prize money comes from on the Macrons slot. There is also a wild symbol that will regularly link up symbols to keep players bankrolls topped up as they vie for the lucrative free spins round. There are also two symbols that will pay out for just two on a pay line plus the scatter combination pays out for two, three, four or five combination wins.

The 3D graphics have been designed to perfection making the Macrons slot appear as a quality slot game whether you are playing on your desktop or mobile device. 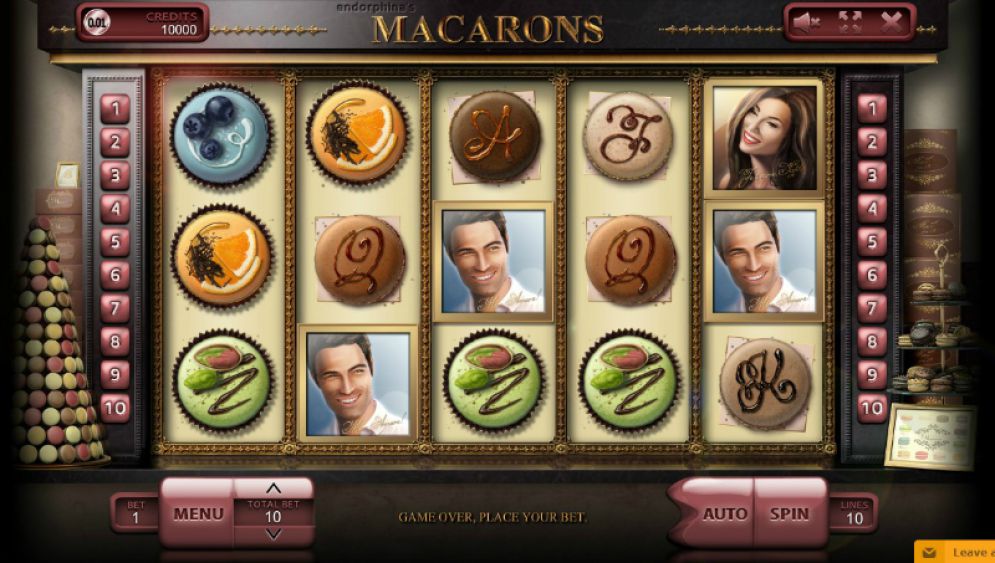 Instantly as you begin spinning the wheels the romance begins with a traditional French melody playing out in the background. You will also hear other sound effects in the background such as the famous French saying ooh la la spoken softly by a French gentleman.
Reel movement is smooth with no lag and the graphics perfectly designed. The background setting of the French style Macrons shop is a nice touch to the theme.
Graphics can be changed to full screen on the top right of the screen where you can also toggle the sound on and off. Further graphics and sound settings can also be adjusted under the main menu option.

The scatter is the equal highest paying symbol, but as the scatter is not a regular symbol this makes the ‘Adorable French Couple’ dancing the centerpiece of the Macrons online slot. The payout for five, four, three, or two symbols is 5,000, 500, 100, or five coins.
At any time you can increase your coin bet per line from between one and ten coins per line. The payouts provided here will then need to be multiplied by the number of coins you bet. An example of this would be when you land two ‘Adorable French Couple’ symbols, the normal payout is five coins. However, if you have four coins on the line, then the sum would be five-coin payout x four-coin bet on the line = 20-coin payout.
The second highest paying symbols are the French man and the French women symbols. Each combination holds equal value paying out 1,000, 200, or 25 coins per coin bet on the line for combinations of five, four, or three symbols respectively.
Strawberry Macrons or Orange Macrons symbols pay 500, 100, or 15 coins for five, thre, or four symbols, and the Blueberry, as well as the Green Macrons, pay 200, 50, or 10 coins for five, three, or four symbol combinations respectively.
There are also lower paying symbols that are Macrons with Ace, King, Queen paying 100, 25, or five coins for five, four, or three symbols and the Jack Macrons paying out 100, 25, five, two coins for five, four, three, or two symbol combination wins.

On the Macrons online slot, there are two main features.
Free Games: This is the Macrons online slot’s free spins round. Land the Bonus engagement ring symbol three or more times anywhere in view on the reels to trigger 20 free spins. It does not matter where the scatter lands, all you need is three or more in any position on the five-reels to make this round count. During the free spins round, any combination wins that you land will be multiplied by 4x the amount of the win. You can retrigger free spins during the free spins round for another 20 free spins with 4x multipliers.
Take Risk: if you are familiar with Endorphina slots, then the Take Risk gamble feature is nothing new to you as it is an integral feature on all Endorphina designed slots. Every time you win, you will be given the option to gamble by clicking ‘Take Risk’. You will then be presented with a face-up card and four face-down cards. You need to select one of the face-down cards which need to be higher than your face up card for you to win. Ace is the high card in this game and the Joker beats all other cards.
One of the best rules to this gamble feature is that you can select ‘Take Risk’ from the main game, and if the face-up card seems too high limiting your odds of winning, then you can still opt to exit the gamble feature by selecting ‘take win’.

Bonus engagement ring symbol is the scatter and one of the easiest ways to get paid for the Macrons online slot. You can land two, three, four, or five in any order absolutely anywhere in the reels for a 20, 50, 200, or 5,000 coins payout respectively. You can multiply these payout values by the number of coins you bet per line. That means if you wager ten coins per line, the payout is an astounding 50,000 coins.

Look out for the Champaign bottle because this is the incredibly useful wild symbol. It will substitute any other symbol on slot except for the scatter. Should the wild land at the end of a symbol combination, it will extend the symbol count. It can also land in between two of the same symbol and link them together to create a combination win using the wild. Furthermore, the wild can land on reel one helping to start and complete a symbol combination win.