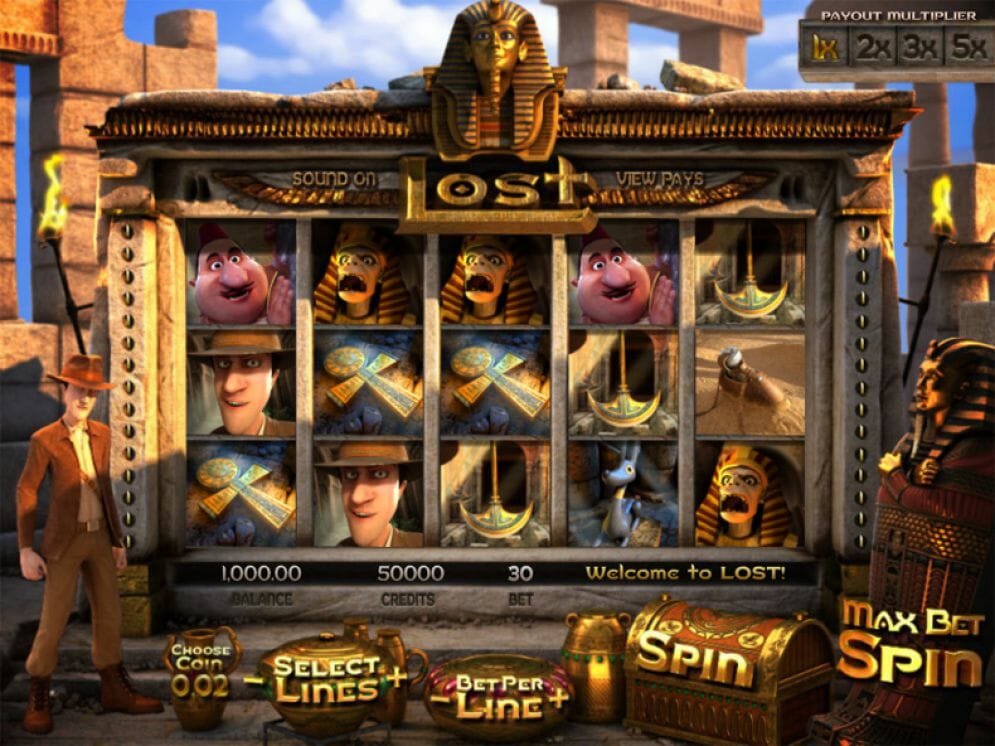 Lost is a video slot that was developed by Betsoft. As one of the online gambling industries leading slots developers, Betsoft is notorious for producing top-quality graphics and innovative bonus features and has become one of the US’s most revered slots developers.
Continuing that focus on good aesthetics and entertaining features, Lost is themed around an adventurer who is hunting for ancient treasures in the Egyptian desert. Dr. Dakota Bones is the main character. He along with his assistant Farooq will aid you in your own quest for riches. Features such as re-spins, wild reels, and click and pick games can be found in this exciting slot and each provides the added potential for big wins.
With a medium variance and an RTP of 95.7%, the action on the reels can certainly get quite tasty. Add in the excellent bonus features and some very tidy graphics and the end-result is a good looking online slot that is entertaining to play.

Betsoft would not be Betsoft if graphics was not one of their biggest priorities on a slot they have developed. Lost certainly continues their trend of bringing aesthetic beauty to the eyes of the players that enjoy online slots. 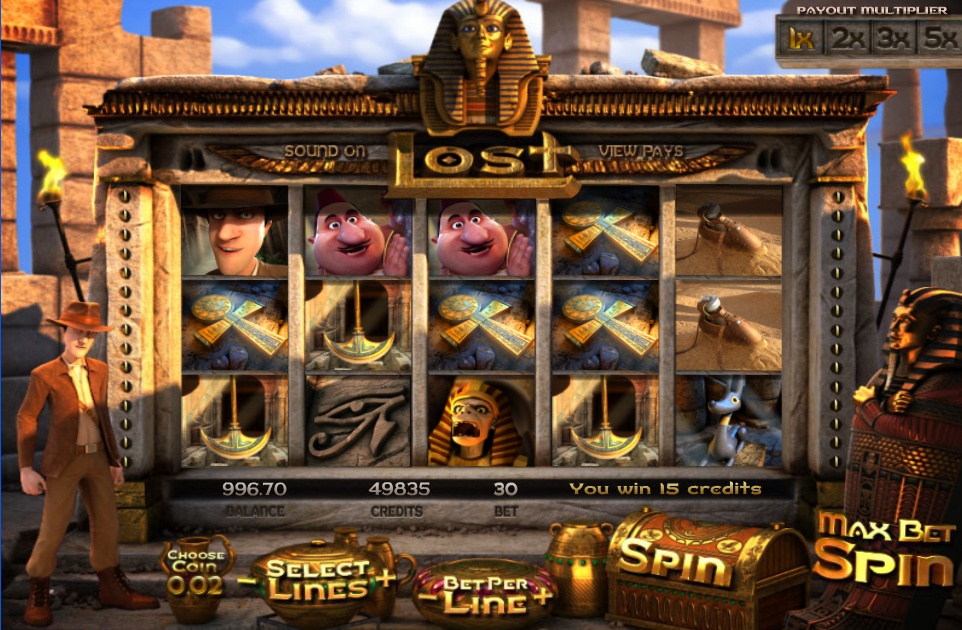 Dr. Dakota Bones stands to the left of the reels and performs a series of animations as he roots for you to land some wins on the reels. Other animations include those that occur whenever you land a winning combination. These animations occur within the particular symbols that created the winning combination.
The sounds and soundtrack on Lost befit the adventurer/explorer theme of Lost perfectly. You often hear the Doctor speaking out in support of you whenever you land a win on the reels.
As for the music, it is reminiscent of a certain movie franchise that shares this adventurer theme and it really adds to the atmosphere of the online video slot.
These sounds can be turned off if they do start to grate but they are far less annoying than you will find in other slots.

There are three entertaining bonus rounds in total on Lost.
Center Wild Reel Bonus: Should you land the staff symbol anywhere on the middle reel, it will turn the entire reel wild and also attach a multiplier of 2x for any wins the wild reel helps to create.
Monkey Click Me Bonus: Activating the Monkey Click Me Bonus is achieved by landing the monkey anywhere on the 4th reel. You are then tasked with choosing from 6 reel locations to reveal random cash prizes. You continue clicking until you find the ‘collect’ symbol which ends the round. At this point, your wins are tallied up and added to your balance.
The Mummy’s Tomb Bonus Round: Another pick type bonus game, the Mummy’s Tomb Bonus game is activated by landing at least four ‘Eye of Ra’ bonus symbols anywhere on the reels. The game involves you picking between the four symbols to reveal random cash prizes. If you pick the Mummy, the game ends there.

As the slots main game feature, there is a real possibility of big payouts from the Center Reel Re-Spins Bonus. Every time you record a win on the reels, you will be given a re-spin of the center reel. If you manage to create another winning combination due to this re-spin, you will be given yet another re-spin of the center reel. This caries on until no new win is created. Furthermore, after every consecutive win, the multiplier attached will increase. A first win will have 1x, a second 2x, a third 3x and four or will have 5x.