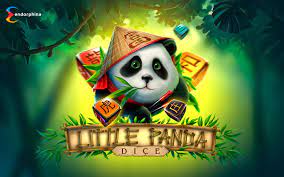 Little Panda is an online slot from Endorphina that uses the 1,024 ways-to-win format across its five reels. Themed around a cute little panda and his life in the jungle, this video slot is one that you are sure to find both attractive and fun to play.
Endorphina is earning quite the reputation for the quality of online slots they are producing and Little Panda is another one that is already proving popular at the online casinos. With high-quality graphics, an RTP of 96% and a couple of good bonus features, this online slot has everything that most of you will be looking for in a slot.

If you are looking for a modern slot that looks great and has some good bonus features, Little Panda by Endorphina is one you might want to check out.

Little Panda is certainly a good looking slot that contains some good quality graphics that are displayed in high resolution. Each of the symbols on the reels has been drawn to a high standard and the animations on the reels really do look effortless.
We like how Little Panda has been laid out with there not being any clutter around and just the main buttons that you need to control the game. You have your ‘turbo’, ‘auto’ and ‘spin’ button to one side and your betting controls to the other.
The soundtrack is nothing too special but it does more than enough to enhance your experience when playing Little Panda. You do have the option to turn this off if it does start to get a little annoying, however.

The Panda himself, as you might expect, is the highest paying standard symbol on the reels. Landing him five times on the reels will bring you a payout of 300x the line bet while four, three and two will pay 100x, 50x and 10x respectively.
The frog and butterfly symbols are the next highest paying symbols on Little Panda and both will give a payout of 150x, 100x and 50x the line bet when you find five, four or three of them in a winning combination respectively.
There is also the two separate flower symbols that are both worth 120x, 80x and 20x the line bet when landed five, four and three times on the reels.
Playing card symbols ranging from the nine to the ace are where the lower payouts will come from with the best payout available being 100x the line bet.
Scatter symbols are represented by a Ying Yang symbol and this bonus symbol is where you can get the largest payouts on the reels. It is also the symbol that can activate the free spins round. Scatter symbols do not have to be in a winning combination, so landing three, four or five of them anywhere on the reels will give you 80x, 400x and 800x the spin bet.

There are two bonus features to look out for on Little Panda, below.

The Panda Feature is the main feature on Little Panda and it will be kicked into action when you land at least three scatter symbols on the reels. This bonus game is a free spins round that offers something a little different compared to free spin rouns on most other slots.
That difference is the wild symbols that that will bring additional multipliers to the wins that you land during the round. When you record a win and there is a wild symbol on the reels, you will be given a multiplier of your win of either 2x or 3x.
The number of free spins you can win will be determined by how many scatter symbols you land on the reels:
Three will award 8 free spins
Four will reward 15 free spins
Five will reward 20 free spins
Additionally, the free spins can be retriggered from within the round when landing the scatter symbols on the reels. Even two scatter symbols will see you given an additional five free spins. There is a very good chance that you will add to your spin count too, so it really is possible to end up with far more than you initially won.

There is also a good little gamble feature on Little Panda that will give you the chance to double up your winnings as many as ten times. Whenever you are lucky enough to land a win on the reels, you have the option of clicking ‘take risk’ which will bring you to a new screen with five playing cards on it.
One of those cards is face-up and your task is to select one of the remaining face-down cards to see if you can find a higher card. If you win, the payout you won on the reels will be doubled but if you lose, you will lose the lot.
You do have the possibility of drawing with the dealer too which will just result in another game being played to determine the winner. Remember that you can try and double up a maximum of ten times, so there is definitely the possibility to win some massive payouts if you are brave enough.

Wild symbols on Little Panda will only ever appear on the second, third, and fourth reels and they substitute for any other symbol on the reels apart from the scatter symbol. As mentioned previously, however, this wild symbol will also provide additional bet multipliers during the free spins round.