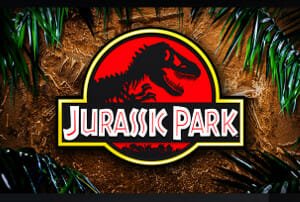 Jurassic Park is a 5-reel video slot machine based on the Steven Spielberg movie from 1993. The original film was one of the highest grossing movies ever produced, and it is now a classic. Manufactured by IGT, the Jurassic Park slot game is available in several different machine variations, all of which are penny slots. Most machines have a 300 credit ($3.00) max bet.
The slot machine is becoming increasingly popular inside of U.S. casinos and offers a highly-interactive gaming experience, featuring bonuses with clips from the original movie.

As we mentioned, this slot game is inspired by the original Steven Spielberg hit film; Jurassic Park. It offers a range of bonus features, wilds, and progressive jackpots. All of the symbols on Jurassic Park machines are either dinosaurs, dinosaur eggs or characters from the movie.
There are a few different variations of the game, including both standalone machines and MultiPlay terminals that each offer unique gameplay. The MultiPlay machines have 5 terminals, and allow for community bonuses that make the play style and atmosphere similar to playing table games.
There are three different game titles under the Jurassic Park name. These variations include Jurassic Park, Jurassic Park: Wild Excursion, and Jurassic Park: Wild Storm.

Most Jurassic Park slots are only available in penny denominations, so there are not many high limit variations available (and none for the multiplayer terminals). The highest max bet you will generally find when playing Jurassic Park slots is $3.00. Some of the standalone machines (like the Jurassic Park Wild Excursion slot game) offer up to 1,200 paylines which adds up to a $12 max bet. This is the highest betting limit that you will find for the game.

The Jurassic Park slot machine offers a number of special features and bonuses. Base Game Wilds can be triggered on game 1 or 2. During the wilds feature, players select dinosaur eggs. Depending on which eggs they choose, they reveal wilds that will be applied to their current spin.
If a player lands three or more bonus symbols on a MultiPlay machine, they will earn a community bonus. One of the most unique parts of this bonus is that players can choose to either to play their bonus upon receiving it or use it later. By racking up bonus entries, players can increase the bonus multiplier.
Panic in the Park: Players place generators in different areas of Jurassic Park. They are rewarded with different credit values and/or multipliers.
Escape From Jurassic Park: Players enter Jurassic Park on one of the Jeeps. Players alternate picking an escape route (either straight, left or right) and try to avoid different dinosaurs until they either get the final round or run into three dinosaurs. If they reach the final round, they will earn credits and/or multipliers.
Raptor Rampage Free Games: Players receive 8 free games with three sets of reels (1 with T-Rex symbols and 2 with Raptor symbols). As they spin, the T-Rex symbol attacks the raptors until this happens five times, at which point the players are awarded a random amount of credits.

Wild Excursion / Wild Storm Free Spins: Players earn 10 initial free spins. By landing more free spin symbols during the bonus, players can re-trigger more spins up to a maximum of 120.
Cryogenic Free Spins: In the Cryogenic Free Spins bonus round, players earn 10 free spins. Players can re-trigger more spins during the bonus up to a maximum of 100. During each spin in the bonus round, the goal is to rack up credits, while tubes of dinosaur DNA enter into the game with additional awards like sticky wilds, extra spins and multipliers.
T-Rex Chase Bonus: During the T-Rex Chase Bonus, players have to escape the T-Rex before it “eats” them. A map with ten different positions appears, where the T-Rex starts in the first position. The player begins in the fifth position. As the player chooses suitcases from the bonus screen, either the player moves along or the T-Rex does. As the player advances, they earn credits. Each suitcase is equipped with a different award, including flares that slow down the T-Rex. The player either escapes or the T-Rex eats them, at which point the player chooses between 3 larger suitcases on the bonus screen. Each one has prizes including credits and multipliers.

Many of the Jurassic Park slot machine variations offer IGT progressive jackpots. There are also plenty of in-game bonuses (listed above) that offer up the potential for big wins. The only downside is (as we mentioned earlier) that this game is only available as a penny slot with a $3.00 max bet. For this reason, the best chance a player has to win big is hitting a large bonus or the progressive jackpot. Jurassic Park slot machines are linked to IGT’s Powerbucks progressive where available.

Since it is manufactured by IGT and they have the exclusive rights, Jurassic Park slots cannot be played online. You may be able to play it in New Jersey at some regulated online casinos there, or spinoffs of the game at offshore online casinos, but they will not be the same as IGT variaitons.