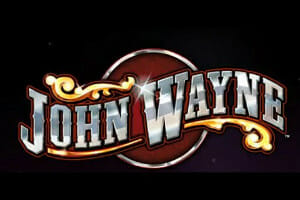 Marion Mitchell Morrison is known around the world for the films he starred in and helped produce from the 1940s through the 1960s. If that name isn’t ringing any bells, that’s probably because you know Marion Morrison as John Wayne, the country western star. Wayne was made popular thanks to his role in films such as The High and the Mighty and slot maker WMS has paid tribute to his work in the Western-themed slot game entitled John Wayne Spinning Streak.
John Wayne Spinning Streak is a five-reel slot game with three symbols on each of the reels. If you are hoping to get lucky with every spin of the reels, perhaps this is not your game considering the overwhelming house edge that comes along with it. With that said, there are a few bonuses that can help boost winnings. The game is simple to understand and fun to play and is perfect for experienced slots players as well as those who may just be getting started.


Click Here to Play Slots at Our Top Rated Casino!
The symbols used by John Wayne Spinning Streak are about exactly what you would expect, with cowboy boots, a cowboy hat, a spittoon, and a horseshoe making up the lowest-paying of the bunch. A sheriff’s badge crossed revolvers, and a black safe makes up a few of the more valuable symbols, while two photos of John Wayne himself are the most rewarding in the game.

As is fairly common for penny slots, the bonus rounds on John Wayne Spinning Streak are not time-consuming at all. Spinning Streak tends to go as quickly as it comes, while most free spins bonuses award a number of free spins that is closer to eight than fifty more often than not. Should you be awarded eight free spins, the total time commitment should be no more than a minute or two. Fifty free spins will take some time to complete, but no more than ten minutes or so.

There are a number of online casinos that offer John Wayne Spinning Streak for real money play online, however, it is important that you be careful. The reason caution must be exercised is due to the fact that there is more than one John Wayne-themed slot game, believe it or not. Playtech, for example, has an online slot that not only looks similar but also features “John Wayne” in the name. If the title does not mention “Spinning Streak” then you are probably playing the wrong game.