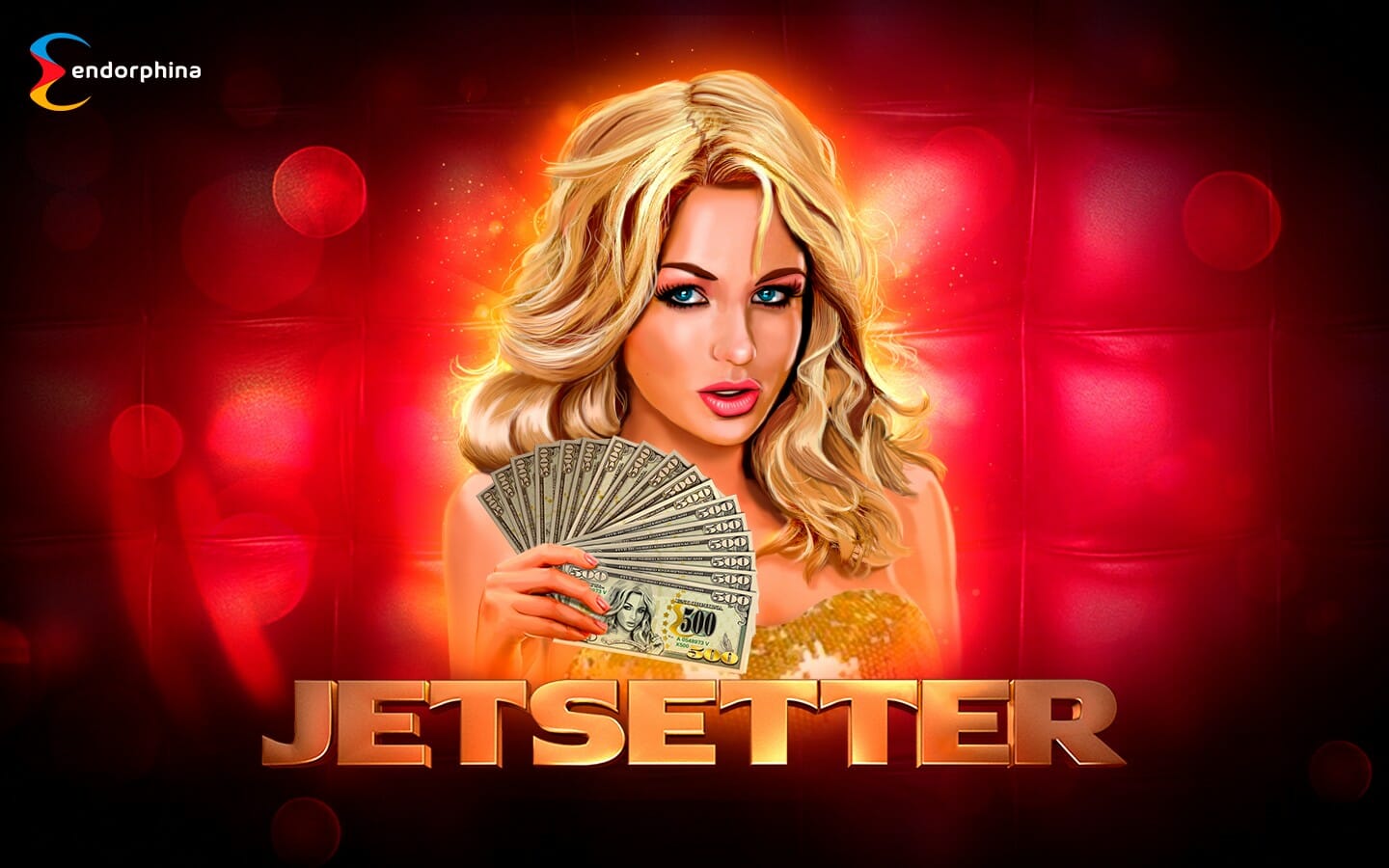 Jetsetter comes from a collection of Adobe Flash mobile and desktop slots designed by Endorphina; a company that creates thrilling online casino games.
The Jetsetter slot is one Endorphina‘s best-designed games with a theme based on a millionaire casino player’s lifestyle.
Players will be picking up cash wins from an easy to land scatter symbol that pays out for two to five symbols anywhere on the reels and launches 20 free spins with three or more scatters. The wild symbol is also very useful on the Jetsetter slot. Two to five wild symbols on a pay line pays out as its own symbol combination and it also doubles the value of symbol combination wins that it helps to complete as the wildcard.

For an Endorphina slot, the graphics are pixel perfect whether you are playing from your mobile device or from a desktop. The pink casino lifestyle themed coloring and symbols depicting wealth are perfectly designed giving players a high-quality look and feel Jetsetter. 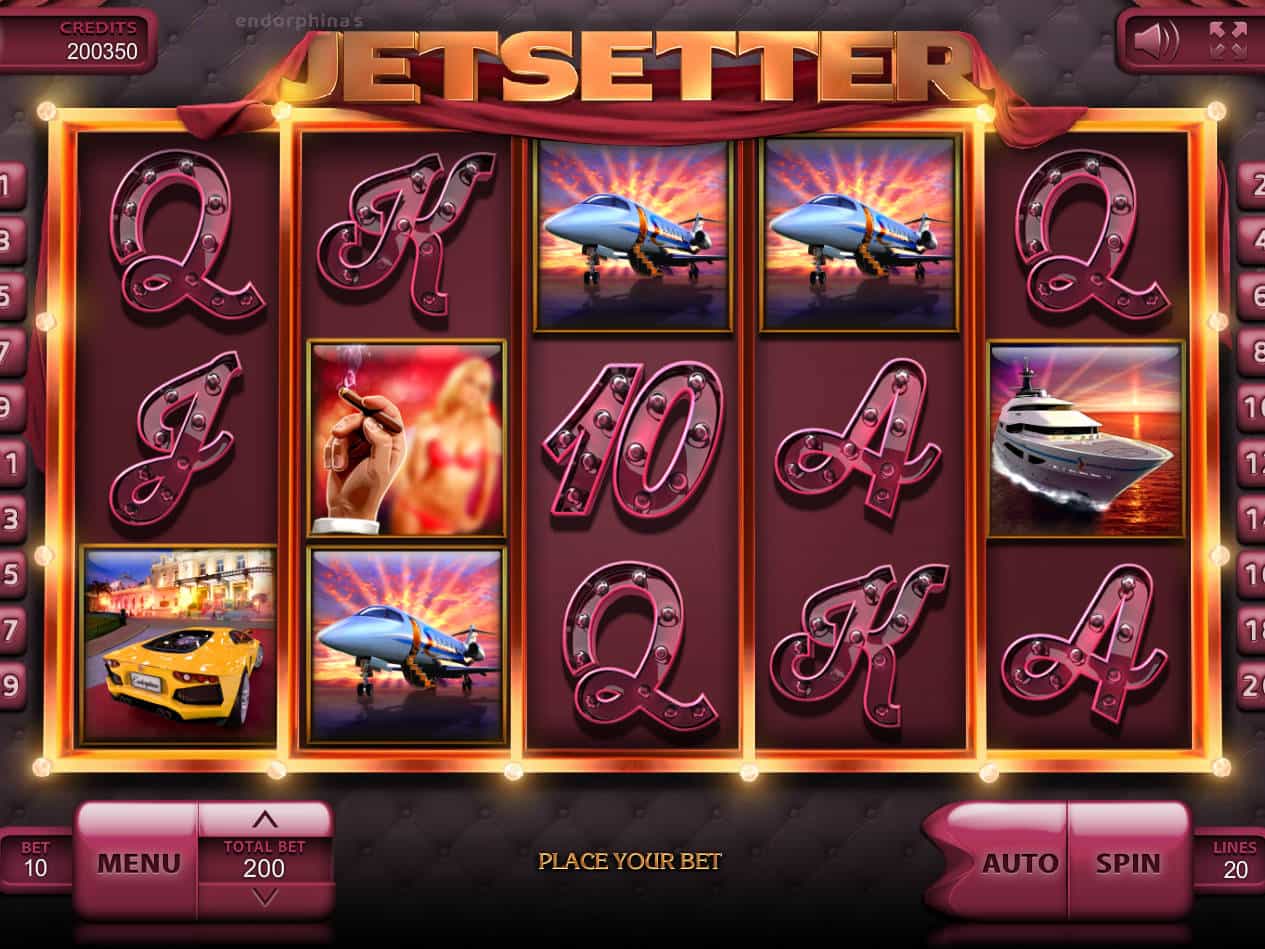 The themed music is an electronic style sound that is similar to music you would hear in a suspense scene on a modern movie. It is actually very similar to the music played in the cult hit eighties film Beverly Hills Cop starring Eddie Murphy. You can use the settings tab to toggle sounds on and off with the option to control master, sound, effects sounds as well as the background volume.
There are some nice animations especially when the dollar notes roll in which is the scatter. The scatter symbols counts out a bunch of US$ notes with a pretty lady on them. When you land the private jet symbol, the plane prepares for takeoff, and the boat symbol also has its own animated effects.
Graphics can be changed to fullscreen or you can stretch the screen helping you to customize the slot to better fit your screen. The stretch option works well if you are playing on a widescreen monitor or a large mobile device and the slot is a little too small.
Finally, you also have the option to change the quality from high to medium or low, which is useful if you are playing on an older device or slow internet connection and you want to decrease lag.

On the Jetsetter online slot there are three main features:

Play a game of cards versus the dealer where you have the chance to double your wins. After you win any amount on the reels, you can choose to ‘Take Risk’. You will enter into a card game where there is one card face-up and four cards face down. You will need to pick one of the face-down cards.
To win, the face-down card you choose needs to be higher than the face-up card. You can enter the gamble round and check the card you are given before deciding whether you want to gamble. Should you decide the odds are too risky, then you can exit without any penalty. Those that base their gambles on math will most likely not gamble if the face-up card is higher than a six as the even odds pay-out and probability of winning are against you.

The scatter symbol pays out big on the Jetsetter slot. It is also very easy to land this symbol because it is not restricted to pay lines and the combination does not need to begin in reel one. Get five, four, three, or two scatters anywhere in view on the reels regardless of the position or whether the scatters are adjacent to each other, and you will be paid out 10,000, 400, 100, or 40 coins. This, in fact, makes the scatter the Jetsetter slot’s jackpot win.