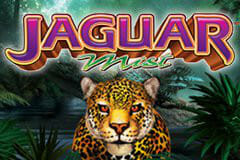 Jaguar Mist is a slot machine from Aristocrat Technologies that does its best to fit in with other games on the casino floor with its jungle theme. With that said, you have to trust that this is a solid game considering it comes from one of the most storied and trusted slot machine companies, Aristocrat. Though the game is a penny slot with a sizeable house edge, there are multipliers and other features that can help you win larger quantities of money, even if it does take some time.


Click Here to Play Slots at Our Top Rated Casino!
Jaguar Mist is a 5-reel slot machine that features four symbols on each of the reels. The types of symbols used by this game do their very best to confuse as they do not feature many animals and other symbols you would typically associate with the jungle. There are the expected and jungle-appropriate jaguar, parrot, and toad images, but along with them come an owl, a dolphin, and a gold coin that serves as a scatter.
In addition to this, the game also uses poker card rankings 9-A. If the dolphin and owl were not out of place already, you will also be interested to know that the game features no jungle sounds. Instead, the game’s sounds appears to come straight from a crowded bar, with a steady stream of unintelligible conversation to accompany you as you play.

There is only one real bonus round that can be earned with Jaguar Mist. With that said, the game does boast an Aristocrat Feature known as Xtra Reel Power. Rather than make a player choose how many paylines they would like to play per spin, the player is asked to choose which reels they would like to play.
In the case of Jaguar Mist, you can play anywhere from one to five reels. For example, if you choose to play the first two reels, you will be playing all positions on those two reels plus only the second from bottom position on the remaining three. In essence, this type of gameplay increases the number of ways in which a player can win.

The Feature Game is triggered by way of three, four, or five scattered gold coin symbols appearing during a winning spin. Upon revealing the symbols, players will win 8, 15, or 20 free games. During the Feature Game, a wild flower symbol appearing anywhere on reels two, three, or four will multiply the winnings of that spin by two or three.
A player can be awarded an extra five free spins if two scattered gold coin symbols appear during any of the free games won.

If you have ever played a penny slot that features a free games bonus, you know that the amount of time it takes to complete a bonus round is nothing more than a few minutes, at most. Of course, the fact that you can retrigger the bonus means that there is a possibility of you spending a bit more time completing the bonus, but at the end of the day the Feature Game usually comes and goes in a matter of a few minutes.