Producer: Endorphina
Display Type: HTML5
Slot Type: Video Slot
Reels: 5
Paylines: 10
Gems & Stones is a five-reel, ten payline slot from Endorphina that promises big payouts, a number of bonus features and plenty of entertainment.
This slot carries an RTP of 96%, some good quality graphics and a low variance and has always been a popular slot at the many online casinos. Expanding symbols, scatter symbols, free spins and a gamble feature is the bonus features that you will find on the Gems & Stones video slot and each of them will give you the potential to win some handsome payouts.
Themed around gleaming jewels, gems and stones, the Gems & Stones video slot will no doubt have you dreaming of the day that you can win the big jackpot and potentially afford some rare precious stones for yourself.

Endorphina has always prided themselves on how good their online slots look and Gems & Stones is another that looks fantastic no matter what device you are using to play it on. All of the graphics look sharp, crisp and of high definition and the animations run flawlessly. 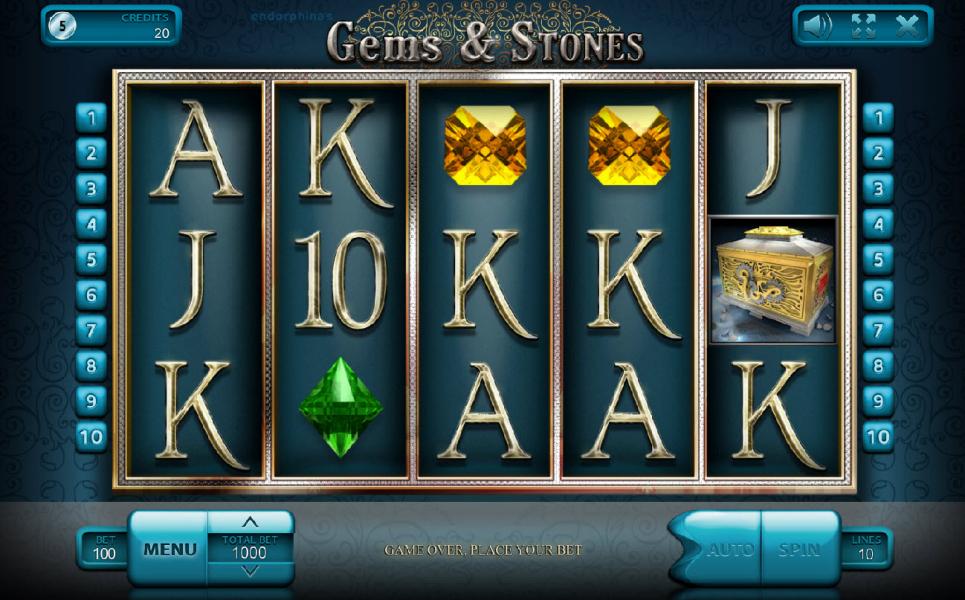 Soundwise, this slot is a little basic but it does have a relaxing soundtrack and the sound effects are what you would expect from an online slot. All graphics and sounds can be altered in the settings if you want to tone anything down.

As Gems & Stones is themed on the different precious jewels of the world, you can expect to see them in all their gloriousness and sparklines on the reels. There are four in total and they are where the higher paying amounts will come from.
For the slots highest payout or in other words, the jackpot, the blue Sapphire is what you want to land five times in a winning combination. Should you do so, you will win 5,000x your line bet while four, three, and two of them will earn you 1,000x, 100x and 10x respectively.
A red Ruby is your next path to big wins as five, four, three and two of them on an active payline will bring rewards of 2,000x, 400x, 40x and 5x the line bet respectively. You then have the yellow Quartz and green Emerald symbols that both offer the same payouts. 750x, 100x, 30x and 5x are the payouts you can receive for landing either five, four, three or two in a winning combination.
The Ace, King, Queen, Jack and Ten are the remaining symbols but the payouts from these will be much lower. Five aces or kings and a payout of 150x the line bet is the best you can hope for when finding five of them on an active payline.
Scatter symbols on Gems & Stones also bring in payouts as well as having some other functions that we will tell you about later. The great thing about these symbols is that they do not have to be in an active payline for you to win and can be found anywhere on the reels. Five, four or three of them will be worth 200x, 20x and 2x your total spin bet respectively.

Not only will you be able to pick up some good wins on the reels of Gems & Stones but you will also be able to make use of a couple of bonus rounds to bring some added potential for big payouts.
Free Spins: Free spin rounds are among the most popular bonus features to find on an online slot and Gems & Stones will not let you down in that regard. There are 10 of them to be had when you find three of the scatter symbols on the reels but instead of being your standard free spins round, this one has an added feature thrown into it.
At the start of the free spins, you are given a choice of symbols to turn into an expanding symbol. Whenever this symbol lands during the free spins round it has the potential to expand to fill up the entire reel it was found on.
Furthermore, you can retrigger the free spins round once more while the free spins are running to give yourself even more of them.
Gamble Feature: If you have played Endorphina slots before you will know all too well that they like to incorporate a gamble feature into most of their games. Gems & Stones has one as well and this can be taken advantage of after winning any payout on the reels. You do not have to gamble with your winnings but the option is always there.
When you do decide to gamble a payout that you have won, you simply have to beat the dealer by selecting one of four different cards. Should the card you choose be higher in value compared to the one already showing, you will double your money. You can then opt to keep it or go again and risk it for the potential of another double up.
You can do this as many as ten times but we do not suggest doing so as the odds of winning ten times in a row are extremely high.

There is no dedicated wild symbol on Gems & Stones but instead, they have made the games scatter symbol have dual roles and can, therefore, act as the wild symbol. This will only happen when there are less than three scatter symbols on the reels at one time as any more than that would see them used purely as scatter symbols and would activate the free spins round.
When acting as a wild symbol, this symbol will be able to substitute for every other symbol you can see on the reels.