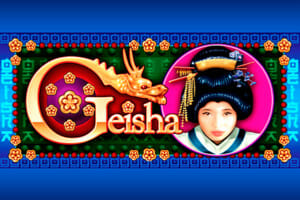 The Geisha slot machine by Aristocrat is one of the most popular slots in just about every United States casino. The game follows the same format as many other popular Aristocrat machines like 50 Lions. This machine does not appear to be going anywhere soon as new versions with flat screens are beginning to find their way into casinos. With that said, the general premise of the game remains the same.


Click Here to Play Slots at Our Top Rated Casino!
Geisha slots are a 9 line game. Players are usually able to bet up to 45 credits, depending on denominations and how the credits are correlated. Geisha slots can be found anywhere from penny slot areas all the way to high limit rooms. In fact, due to its large jackpot potential, Geisha is usually one of the most active high limit slots around.
If you do not hit a bonus round, you can still bank a decent size win by either having several of the larger paying symbols in a row, like a fan, or many symbols in a row in conjunction with the wild Geisha symbol. Outside of the fans and wilds, another good symbol is the flying bird. The wild will pay the most by far, but these other symbols can produce huge returns when you can make 4 or 5 of a kind. Even lower symbols like aces can pay big when you have a full row.

Achieving a bonus round in Geisha slots is not easy to do. This is a very common theme among Aristocrat games. Having said that, when you are able to finally land a bonus round, you will have a lot of potentials. The goal of the game is to land three of the red Chinese arches and to then play your 15 free spins in the bonus round.
The basic bonus round once unlocked with three red symbols anywhere on the screen (does not need to be in a row), will earn you 15 free spins. These spins are where you can really earn a lot more than your initial wager. The key to a big win, or even a jackpot, in the Geisha slot bonus spins, is to land a number of the wild, top paying symbols. As you might imagine, this symbol is the lady featured on the logo of the machine, “The Geisha” herself. She is unmistakable as it is the only female character that is a symbol of the whole slot.


Many big wins in Geisha will happen on a single, big paying spin, but retriggers are a big part of the game. Just as you will need to hit three of the red arches to initiate an initial bonus round, you will be able to retrigger additional spins in the bonus with another set of three red symbols. This is what will allow you to really pile on the winnings. As is the case in normal rounds, landing big paying symbols in a row, especially with wilds, will also pay quite well in the bonus round. Plus, every two red arches are going to net a moderate payback as well, around 6x your total wager assuming you are playing max bet.

Geisha slots are just as difficult to find and play online as many other traditional brick and mortar, video slots, especially those made by Aristocrat. With that said, there are more of these games available online now than ever before, mainly in regulated markets. Players that have legal online casinos in their state, like in New Jersey, will have the best chance of playing Geisha slots online. There are a number of sites with phony versions of this game, but they are not to be trusted.