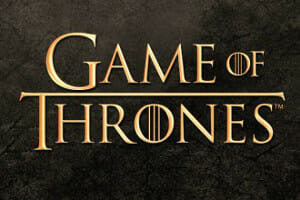 
Click Here to Play Slots at Our Top Rated Casino!
Aristocrat uses almost every inch of the nearly 7 feet of display space for the Game of Thrones slot machine. The base slot game actually allows you to play three video reels at once. Although they’re shown spinning at the same time, each real is its own separate game. Game of Thrones features bonus games and wild bonuses that will pop up randomly on individual reels while you play.
Three games at once with random wild symbols is a recipe for lots action and possible jackpots. However, the action with the Game of Thrones slot machine really heats up when you reach the bonus rounds. Additionally, Game of Thrones features multiple progressive jackpots for potentially huge wins that may reach over $1 million.
In keeping with the TV show, Aristocrat created Game of Thrones to be a highly volatile slot machine. The wins in Game of Thrones may be huge. At the same time the losses when you play Game of Thrones may also add up quickly. Whichever way the game goes, there will certainly be action.

When three bonus symbols land on a single game reel the game will change. The three video reels combine of becoming one massive video wheel. You’ll spin the big wheel to find out which bonus feature you will play. There are three base games that represent the houses of Stark, Lannister, and Targaryen. When you win a bonus the massive screen shows video clips from the TV show. Here are details on each bonus round:
Mother of Dragons Feature – You choose a dragon egg which will give you a multiplier sequence and number of picks. The additional bonus rounds follow where you select prizes.
Battle of Blackwater Bay Feature – Five or six free games are awarded on a new reel set which includes Aristocrat’s dynamic stack symbols and an added wilds feature.
The Wall Feature – Seven spins are awarded during which the reel can grow up to 16 symbols high or 134 lines. Elevator wild awards multipliers are added from 2X – 5X. This bonus game is massive and reaches almost 7 feet high.
Progressive Feature – When you land on the Lion Progressive, Dragon Progressive or Direwolf Progressive you’ll be taken to a second bonus pick screen. Five symbols will appear in which four symbols will award credit prizes while 1 symbol will award the progressive jackpot. The Grand jackpot wheel segment only appears for bets of 300+ credits ($3).
The Game of Thrones video slot machine is everything you’d expect from Aristocrat and the hit HBO show. The game captures the best of the TV show and adds a beautiful 4k video experience. This slot machine is intended for fans of Game of Thrones, but the action and huge progressive jackpots can appeal to anyone.