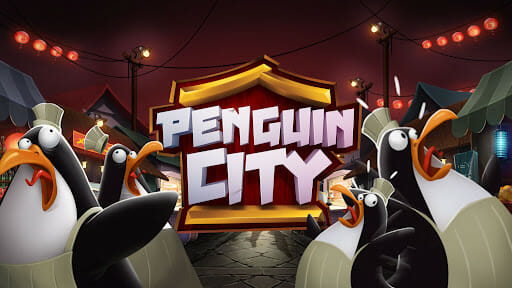 The Emperor Penguin slot machine is manufactured by Aristocrat; a slot game producer that can trace its roots to 1950s Australia. Though the company was founded in Australia, today their games are now known by casino-goers the world over. One of their especially entertaining titles is Emperor Penguin, a popular game whose theme depicts a black and white penguin as a regal Chinese emperor.
Despite the silly nature of the theme, this penny slot offers a serious variety of ways for players to win. This machine is still a penny slot, so the house edge is quite large, but there are plenty of bonuses and jackpots that can help make that house edge worth enduring.


Click Here to Play Slots at Our Top Rated Casino!
Emperor Penguin is a 5-reel slot game that features four unique symbols on each of the reels. With such an obscure theme, it may be difficult to envision the symbols that might be used, but they are simpler than you might imagine. Included are poker card rankings 9-A, castle, crown, and a mandolin.

As was mentioned above, there are a few different ways by which a player can win money beyond the base game. In total, there are two bonus games and two jackpots, however one of the bonus games breaks down into five separate games. All things considered, these bonus games can yield some considerable cash, and we have outlined all of them below:

The Great Battle works by forcing a player to pick between a gold and a green symbol, with one of the two being the correct choice. Should the player guess correctly, they will move up one level on the prize ladder. Incorrect guesses keep a player at the same level. The feature concludes after a player makes either nine correct guesses or a total of three incorrect guesses. The prize awarded will correspond with the prize ladder level reached.

A player is tasked with selecting a single penguin from a group of three penguins colored green, purple, and blue. The penguin you select will award a prize, and that prize is multiplied by the number of grey-colored fish caught by your penguin. At the conclusion of the round, a final orange-colored fish will be tossed to your penguin. If it is caught, your winnings will be multiplied by two, three, or five.

In this game, a player simply touches gold coins until two like prizes have been revealing. The winnings revealed will be multiplied if a multiplier is displayed on the screen.

A player is tasked with touching one of a grouping of magic plates. Five, eight, ten, 15, or 20 free games will then be awarded. During these free games, one, two, or three randomly selected lines will be played. During the free games, three scattered gold coin symbols will add five more spins to your current tally.

When compared to an overwhelming majority of other penny slots, Emperor Penguin actually features some lengthy bonus rounds. Some of the five available Emperor Penguin Bonus games can be time-consuming, as can the games associated with the jackpot round. At the end of the day, they will not take up much more than a few minutes when all is said and done.