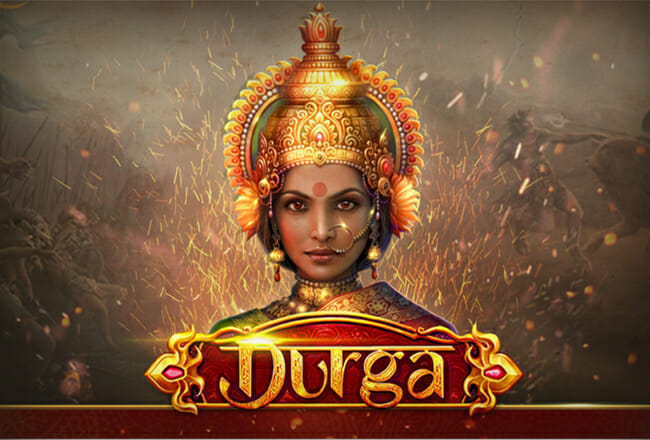 Producer: Endorphina
Display Type: HTML5
Slot Type: Video Slot
Reels: 5
Paylines: 40
Durga is another entertaining online slot that was developed by the small but up and coming Endorphina team. Containing five-reels and 40-paylines, this high variance online slot is themed around the Indian God of War called Durga. It is a clean looking slot that is mobile-optimized and can, therefore, be played on practically any mobile device.
Endorphina has released a number of good quality slots in recent months and Durga is another of them that is already popular with players. With an RTP of 96% and a couple of lucrative bonus features in the free spins round and gamble feature, Durga is an online slot that will certainly appeal to many of you.

Add to that wild symbols that expand and you have plenty of ways to get your hands on some handsome profits when spinning the reels on this online slot.

As with most online slots from Endorphina, Durga has a clean look and is comprised of some good graphics and smooth animations. Each of the symbols has been designed well and fits within the theme and the animations and you can count on the soundtrack to keep you in the mood when spinning the reels.
There are not as many animations as you might find on other online slots but sometimes less is more. Endorphina has obviously decided to keep this slot nice and simple and that is evident further through the clutterless layout.
The interface is easy-to-use and you will have no trouble finding where all the buttons are and what they will do. These controls are at the bottom of the screen under the reels and you will be able to control everything from your bet sizing to the number of lines you want to cover. You will also be able to make use of turbo mode or an autoplay feature that will allow you to rest your little fingers and let the slot play by itself.

A golden bell is the highest paying standard symbol on the reels of Durga and it is worth 250x, 75x and 20x the line bet should you land five, four, and three of them in a winning combination respectively.
A ring of fire symbols is the next highest paying standard symbol and this time you will be rewarded with 100x, 55x or 15x the line bet when you land them.
As for the bonus symbol in Durga, this is the scatter symbol that is represented by the demon-like creature. Scatter symbols do not have to be in a winning combination which means you will be rewarded 200x the spin bet no matter where they are on the reels as long as you land three of them.
The two other symbols of note are the shell and flower symbols which both bring the same payouts. 75x, 25x and 15x will be what can be won for landing five, four or three of each of them respectively.
Playing card symbols ranging from 9 to the Ace are there to make the numbers up and will bring you the lower payouts on this online slot. They actually all have the same payouts attached to them with the best of them being 25x the line bet for five symbols found in a winning combination.

There are two bonus features on Durga that could both lead to some impressive payouts.

Another good little bonus feature on Durga is the gamble feature. When you have landed a win on the reels you can opt to take a risk with your winnings by gambling them in an attempt to either double or quadruple them. Anyone who is brave enough can attempt to turn their winnings into even more.
You can either guess the color of the next card from the pack to double your winnings or guess the suit of the card to earn four times your winnings. Be careful though as if you guess wrong, your winnings will all be taken from you.

Wild symbols in Durga are represented by the lion symbol and when these land on the reels, you are in for a bit of a surprise.
They can only be found on the second, third, and fourth reels but not only do substitute for all symbols apart from the scatter, they can expand in any direction. On top of that, they will award a multiplier of either 2x or 3x to any wins that you land on that spin.
These wild symbols are also present during the free spins round too, so they really do add a lot of potential for wins once you have secured some free spins.