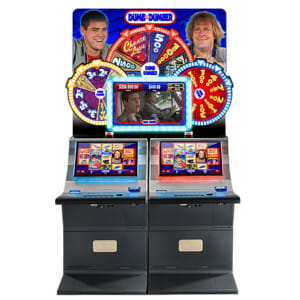 The Dumb and Dumber slot machine from Aristocrat is everything you would expect from a game with a movie theme. The movie was originally released in 1994 and seems to be growing in popularity every year thanks to cable TV. There are plenty of movie clips featuring Lloyd Christmas (Jim Carrey) and Harry Dunne (Jeff Daniels). The movie footage doesn’t stop at video.
This slot machine features more audio clips as well as plenty of movie iconography. Not every movie is as quotable as Dumb and Dumber and that wasn’t lost on the game producers. This is another movie themed slot machine that should make fans of the movie very happy. However, this game might be more than just another one for the fans of the theme.


Click Here to Play Slots at Our Top Rated Casino!
Dumb and Dumber uses Aristocrat’s Wonder Wheels cabinet that can be seen with such slot machines as Batman and Robin, The Big Bang Theory and more. While fans of the movie will play this video slot machine for the movie clips, audio, and imagery. Most slot players will be more focused on the 10 different bonuses and three-tiered progressive jackpots. The game’s SSP has a top jackpot start-up of $10,000 and an MSP top jackpot that starts at $250,000. Not too shabby!
This penny slot machine has an nontraditional video reel setup. The 1st and 5th reels each have 3 rows of symbols while the 2nd, 3rd, and 4th reels each have 4 rows of symbols. The minimum bet is 50 credits ($0.50). The Dumb and Dumber Wonder Wheels cabinets can be found in two or three seat configurations with either tall and short video displays. There’s no game play difference in the high and low display setups.

Dumb and Dumber is considered a medium volatility slot machine in part because the feature frequency is high. The lower the volatility, the more time a player may be able to spend on the game. A player should see a good run for the money when playing this game.
Dumb and Dumber game has both Bonus Games and Bonus Features. The themed Features appear randomly during base game play. There’s quite a few different features:
Ketchup and Mustard Wilds – Ketchup and mustard are randomly thrown on various symbols to make them Wild.
Kung Fu Multiplier – Multiplies a winning game.
Shaggin’ Wagon Bonus Credits – Random popup with Bonus credits.
Most Annoying Sound Credits – Random popup with Bonus credits.
Mockingbird Credits – Random popup with Bonus credits.
Laxative Respin – More spins, more wins.
The Bonus Games will come into play when the Dog Van Scatter Symbol lands on reels 1, 3, and 5. The player will be prompted to spin the big wheel which will choose between the three Bonus games below or six different credit rewards.
Aspen Free Spins – 10 free spins are awarded. After each spin, snowballs are thrown at the symbols. These become Wild symbols which can turn a good spin into a great spin.
Dante’s Inferno – In this Pick ‘em game players will select from 18 cheeseburgers. The goal is to choose credits or peppers for multipliers. Choosing three poison symbols will end the game.
Chance at Love – This is the most desirable Bonus game. One of the smaller wheels will spin and award credits. The other smaller wheel has a multiplier AND progressive jackpots. The win will either multiply the credits or award a progressive jackpot.
Many themed slot machines can be mostly appealing to fans of the brand associated with the game. The Dumb and Dumber slot machine with Wonder Wheels might be a little different. The progressive jackpots and constant in-game features should make this slot machine appealing to any player looking for a fun game with the potential for big jackpot wins.

The Dumb and Dumber slot machines are produced and manufactured by Aristocrat. Their slot machines occupy a lot of space in brick and mortar casinos. Unfortunately, the same can’t be said for all Aristocrat slot games in online casinos.
Dumb and Dumber isn’t available in online casinos in the United States or anywhere else. Based on other popular online slot game releases there’s a chance this might be available elsewhere in the world before the United States. Over the years, Dumb and Dumber has grossed more than $250 million, so there’s definitely a demand for the movie. If you’re a fan of the movie, keep an eye out for the online slot game in the future.