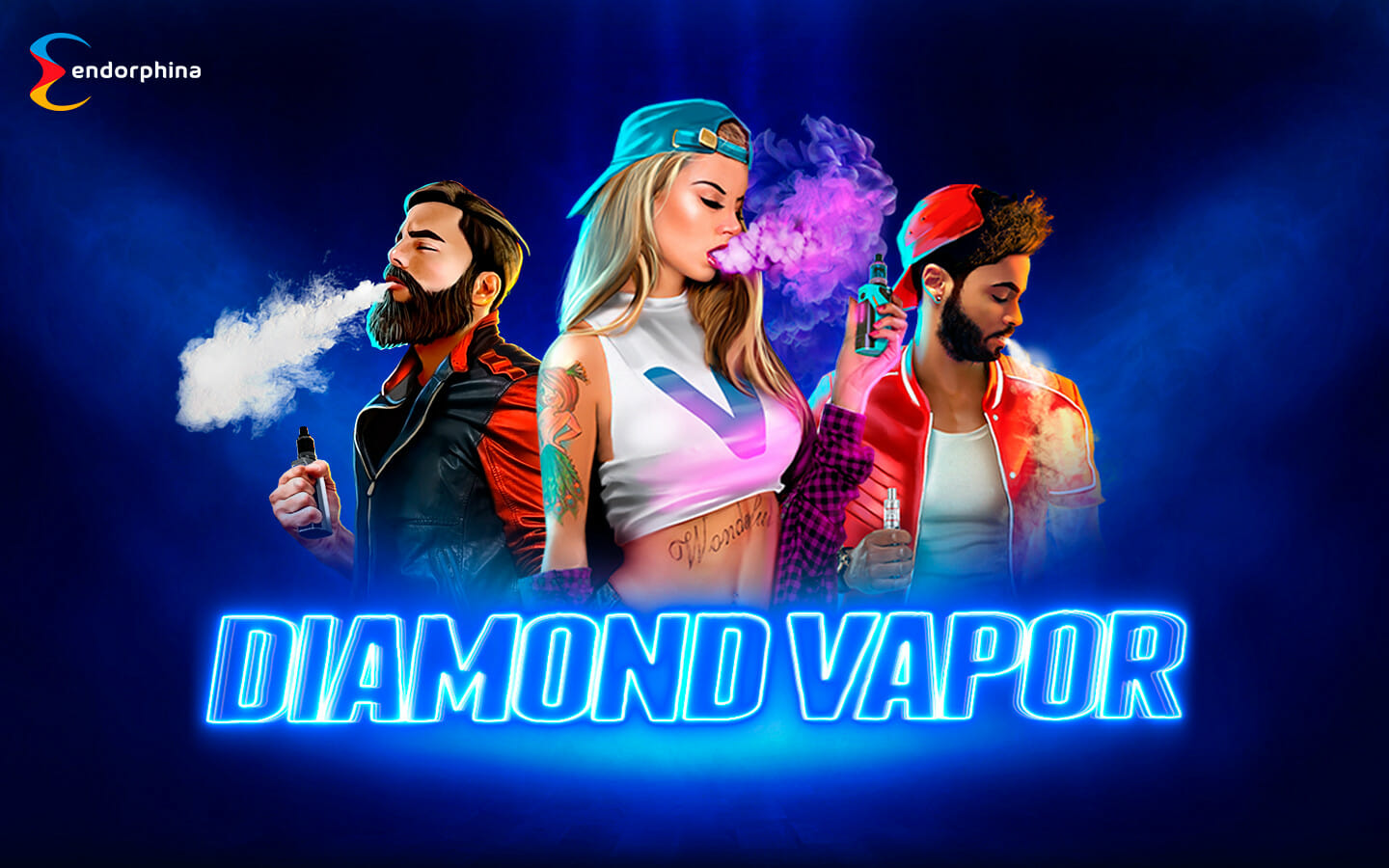 Diamond Vapor is a five-reel, 10-payline slot from Endorphina that can officially claim to be the very first video slot to be themed around vaping.
Vaping has been a growing trend over the last few years and this highly volatile slot pays homage to that trend. Containing an RTP of 96%, a high variance and an excellent free spins bonus round, Diamond Vapor is fast becoming a popular choice at the online casinos.
That free spins round contains expanding symbols and can even be retriggered but while that is where you will find some mega payouts on Diamond Vapor, there are still some impressive wins that can be won straight from the reels as well.

Endorphina has always been known for producing attractive slots and Diamon Vapor is no exception. Full of bright colors, expertly drawn graphics and some super-smooth animations, this online slot really is one that can be considered good to look at.

We like the vaping animations when the main characters are found on the pay lines and we also like the gamble feature animations when they are vaping against each other. The music in the background is also pretty funky and will have you nodding your head as you spin the reels.

All of the symbols on the reels are related to the theme and the symbol with the highest value is that of the Games Logo which will payout 1,000x the line bet when found five times in a winning combination. Finding it four, three or even two times on an active win line will also see you paid out 200x, 50x and 10x the line bet respectively.
The vape is the next most valuable symbol and this will pay out 500x, 100x, 25x and 5x the line bet respectively when found five, four, three and two times in a winning combination.
The three main characters are up next and they are all worth the same in terms of payouts. Five in a combination earns you 250x the line bet, four is worth 50x, three 20x and two of them is worth 5x the line bet.
As for the special bonus symbols on Diamond Vape, there is a scatter symbol which is represented by the ‘Vape Bar’ symbol on the reels. This symbol will not only help you to activate the free spins round on this slot but will also have its very payouts attached to it as well.
As a scatter symbol it does not have to be in a winning combination either so just finding three or more of them anywhere in view will be enough to get a payout. Five of them will actually give you 2,000x the spin bet while four and three of them respectively will be worth 200x and 20x the total spin bet.

You can take advantage of two different bonus features on Diamond Vapor:

Most slots players love free spins, and on Diamond Vapor there is an excellent one that can really bring in some top prizes. Activated by landing three or more scatter symbols, this free spins round will give you ten free spins of the reels and will give you the added benefit of making all symbols expanding.
This means that whenever you land a winning combination, those symbols will expand to fill the entire reels and therefore giving you far more winning combinations.

If you have ever played online slots from Endorphina in the past, you will probably know that they always like to incorporate a gamble feature for their players to take advantage of. Diamond Vapor does not buck that trend and also gives you a chance to improve your winnings.
Whenever you are lucky enough to secure a win on the reels, instead of taking the money each time, you can actually opt to try and double it. On Diamond Vapor, you essentially get to pick between two vapers in Mike and Jack in order to guess which of them will do the best vape. If you win you double up and if you lose you lose it all.
If you are lucky enough you can double up five times in a row but you do have the option of banking your winnings at any time.

The scatter symbol on Diamond Vape is actually also the slots wild symbol as well. The ‘Vape Bar’ symbol will turn into a ‘Wild Bar’ symbol if it can ever help to complete a winning combination on the reels.
This symbol will substitute for all other symbols on the reels and will no doubt help you to bring in some wins when you least expected them.