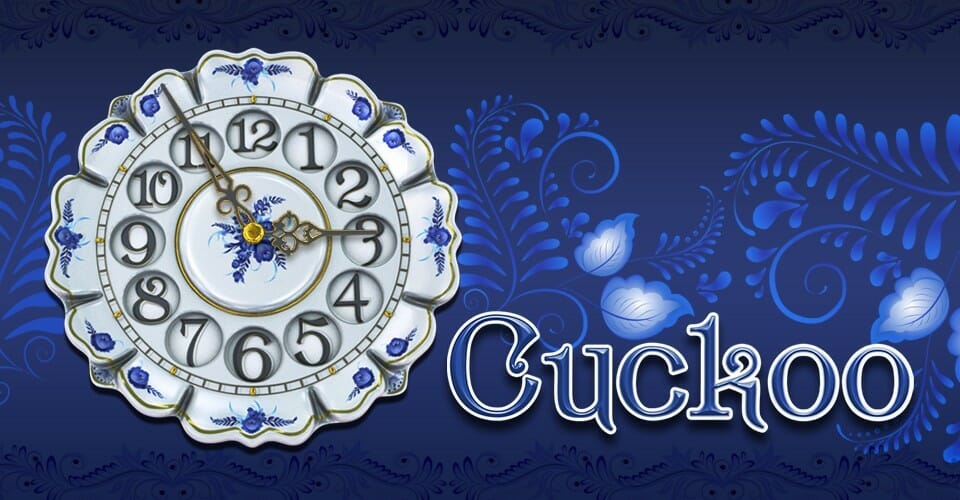 Endorphina has released a number of video slots in recent times and Cuckoo is another of them.
Themed around clocks and easter, this delightfully designed slot offers an RTP of 96%, some excellent graphics and animations and a very lucrative main bonus feature. Containing a simple but effective reel format of 5-reels and 10-paylines, this is an online slot be an excellent choice for the online casinos.
With a maximum win of 2,400x your total bet, that bonus feature is where you will get the highest payouts in this slot but there are also some very impressive payouts to find on the reels themselves.

Cuckoo is certainly a beautiful slot to look at due to its high-quality graphics and animations. Set inside a Cuckoo clock and with some wonderfully designed porcelain eggs as the symbols on the reels, the aesthetic nature of this slot is sure to appeal to many of you.

As for the soundtrack on Cuckoo, it is perfectly befitting of the theme and is actually very relaxing. Animations too are great though there are not too many of them. The reels spin smoothly and each of the symbols will light up once you have found them in a winning combination.

The highest paying symbol on Cuckoo is that of the golden colored porcelain egg and this will bring a top payout of 5,000x the line bet should you find it five times across an active payline. If you happen to land it four or three times instead, you will be rewarded with 1,000x or 100x respectively.
The next most valuable symbols are the black and blue egg which will bring a multiplier of 2,500x the line bet if you land it five times in a winning combination. You will also be given 500x and 50x for landing the symbol four or three times on an active payline.
The blue porcelain egg will also deliver some handsome payouts with 1,000x the line bet being the payout rewarded for landing the symbol five times in an active payline. The payouts for landing it four and three times are 200x and 20x respectively.
Another nice touch on Cuckoo is the fact that you can earn payouts when you land a mixture of the different eggs in a winning combination. Any combination of the three eggs we described above will bring payouts of 50x for five, 20x for four and 10x for three.
Making up the numbers on the reels are some elegantly designed playing card symbols ranging from the Jack to the Ace. These are where you will find payouts from the lower end of the spectrum with the largest

There are two bonus features on Cuckoo with both giving you the chance to win further payouts from this online slot:

The main bonus feature on Cuckoo is that of the Clock Bonus Game which is triggered when you land three of the ‘clock’ scatter symbols on the 1st, 3rd, and 5th reels. During this game, you are presented with a clock which will have an alarm set to a time that is unknown to the player.
You are tasked with slowly moving the hour hand clockwise around a clock face. A risk meter to the bottom left of the screen will tell you how much risk there is of the alarm going off and this will increase with every new position you move. The multiplier of your win will also increase with each movement so it really is a game for the brave.
Once you are happy with the chosen position the hands will spin and should the alarm go off you will lose the game and win nothing. If you manage to avoid the alarm you will win the multiplier and be given another chance to do the same. You only get two turns at the game and that is only if you win the first one.

A common theme on Endorphina slots is that they always have a gamble feature and with Cuckoo there is no exception to this rule. Using this feature you can double up any wins that you have landed on the reels up to a maximum of ten times.
When you land a win, simply click ‘take a risk’ and you will be taken to a screen with five playing cards. One has been revealed while you have to pick one of the remaining four to see if you can find a higher card than the one that is revealed.
Should you manage to do so, you will double up the win and have the option of banking that money or trying again to double up. Just remember that if you ever lose the game, you will lose everything that you have won.