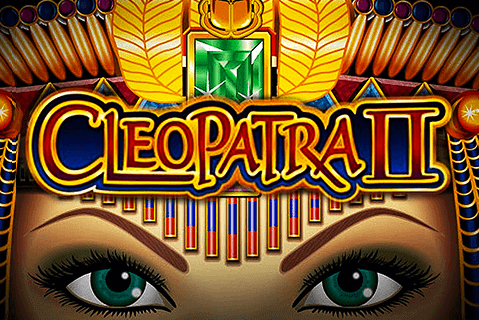 Cleopatra II is the second, newer version of the eternally popular Cleopatra slot machine from IGT. While these two machines share the same name, they are actually quite different in terms of their actual gameplay. Beyond the requirements for achieving a bonus round and the high-risk, high-reward nature of both games, they are effectively entirely unique games. In fact, some fans of Cleopatra do not play Cleo 2 at all, and vice versa.
IGT cites Cleopatra II slot machines as having been released to the public in 2012, making it a fairly recent game in the world of slots. The game was undoubtedly produced in response to the overwhelming demand that the first version of Cleo has always had. Many casinos now feature some of both games while others have phased out the first edition and have exclusively focused on the Cleo II version of the game.
Playing Cleopatra II is certainly not for the faint of heart. Bonus rounds can be exceedingly difficult to land, and when they do, a brutal result is a very real possibility. This game is most optimal for slot players that want to find the best chance at a huge win, even if the most frequent end result is a loss.

Cleo II is a video slot machine that is typically presented in a 5 reel and 20 line format. This means that a max bet will be 100x the denomination selected. Many machines have varied number of lines, but Cleopatra II is virtually always a 20 line game. 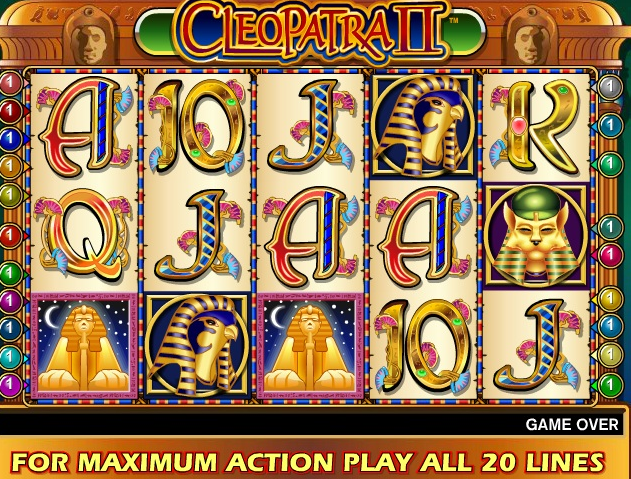 The game allows you to stop play and skip to the end of a spin as fast as you would like. As a whole, it plays similarly to other similar titles from IGT, both in speed and general experience from a player perspective.

There is an opportunity for very large line hits in Cleopatra II slots. It is very possible that you could play this game for an extended amount of time with several decent sized line hits and no actual bonus rounds in between while still coming out a winner.
The game has given fairly odd names to the symbols that are used. The regular symbols in Cleopatra II include:
10,000 Credits on Line-Cleopatra (Wild)
500 Credits on Line-Anubis, Horus, Bastet
125 Credits on Line-A, K
100 Credits on Line-Q, J, 10
As seen by the list of payouts above, the Anubis, Horus and Bastet all have max payout wins that are equal, while the biggest win possibly in the game is 10,000 credits with a Cleo Wild line hit. Since the Cleo symbol is wild, the most common way to land the line hits is with one of the better paying symbols in conjunction with a Cleo or two.

The bonus rounds in Cleopatra II are notoriously difficult to initiate. In order to unlock the bonus feature round on Cleo Two, you need to receive three “Sphinx” symbols anywhere on the screen. They do not need to be on the same line or in any particular pattern.
Once you have three Sphinx symbols, a screen will popup where you have three different boxes to choose from. After you touch the screen, a number will appear and start to count. The minimum number of spins in a Cleopatra II bonus round is 5 and the max is 15. Most of the time you will receive in the range of 8-12 spins. In this game, additional spins are even more valuable than usual given the dynamic of the bonus round itself.
Instead of bonus spins being a fixed multiplier or having added wilds or other symbols, the game instead multiplies the win by the number spin you are in within the bonus. For example, your first spin in the bonus round will pay 1x multiplier, while the third spin will pay a 3x multiplier. Because of this, your later spins will be infinitely more valuable. Your 10th spin paying 10x could very well comprise the bulk of your bonus round win.
The real appeal and huge win opportunity in Cleo II is found in the retrigger potential. If you manage to find three more Sphinx symbols on a bonus round spin, you will be awarded with an addition amount of bonus spins, equal to your original number. So, if you won 10 spins initially in the bonus, and have four spins left, a retrigger would leave you with a net of 14 total remaining bonus spins.
Since each of the spins produces an incrementally larger multiplier, the retrigger can end up paying out 20x, 30x or even 50x your bet on any given line hit within the bonus round. The maximum number of spins possible with the aid of retriggers in Cleopatra II is 50.

There are no progressive Cleopatra II slot machines and the jackpots in this game are not found in this fashion. Instead, jackpots and big wins are usually won via individual line hits, and more often, using the bonus rounds. If you take a look at pictures of handpay jackpots and other large wins at Cleo II, chances are that you are probably seeing the result of a bonus round win.
There is no real “maximum” to how much can be won on Cleopatra II, but there have been many players who have hit a few thousand times their bet size. A $5 wager on Cleo II could end up amounting to a several thousand dollar win. This is, of course, is unlikely, but the primary draw and attraction of Cleo II is absolutely found in its big win possibilities.

Given the extreme popularity of this game, it should come as no surprise that Cleo II has become a mainstay in many high limit slot rooms. In fact, this game is most likely to be found in high end casino properties, with much of this being due to its 100x max bet allowance, meaning a $5 denom game will turn into a $500/spin machine. This is a win-win for the casinos and for Cleo II players looking to make a big gamble at very high stakes.
Low limit Cleo II games are definitely available, but they are usually going to be at least a few dollar per spin. The nature of the 100x denom max bet setup of this game means that even 2c and 5c games will end up being $2-$5 per spin.

Unfortunately, Cleo II is not available as an online slot. Not only can US players not play this game for real money at any online casinos, it is not even offered in simulation or demo format. There was a point in time where Cleopatra II could be played online, at least for free and practice, but this is no longer the case.
The sale and transition of the IGT brand is one of the likely reasons for the current unavailability of Cleopatra II as an online slot.