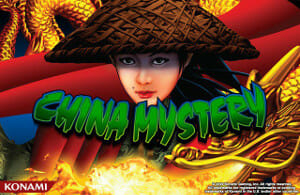 China Mystery is one of the most popular video slot machines you’ll find in any casino. The game is owned & manufactured by Konami Gaming and it comes in a variety of platforms.
In casinos, you’ll find the China Mystery in standalone cabinets like most slot machines. You’ll also find it as part of the massive multi-machine progressive game Titan 360, which is available in less than 10 casinos around the country. Another place you might come across the China Mystery machine is outside of casinos as part of the popular MyVegas Facebook game and mobile app.
There will be a different amount of pay lines depending on which configuration and denomination of China Mystery you play. There are 10, 15, 20, 25 and 30-line versions of the game available. Similarly, you’ll find multiple denominations of China Mystery ranging from $0.01 to $1 per credit. You’ll find the penny slot machine version of this video slot machine on the main casino floor while the quarter and dollar denominations are often found in high limit rooms. Depending on the casino you visit you may also find a nickel version.


Click Here to Play Slots at Our Top Rated Casino!
China Mystery is somewhat of an anomaly in casinos today. It doesn’t have all of the bells and whistles that you’ll find with some newer slot games. Despite the lack of crazy bright lights and loud noises, the game is still fun to play because of its familiarity and the simplicity of gameplay. China Mystery can be considered a classic video slot machine in a similar way that Wheel of Fortune is considered a classic reel slot machine.

Bonuses with China Mystery are fairly simple. There’s only one way to earn a bonus with this video slot game. You simply need to line up at least 3 bonus symbols per pay line to earn free games. What turns the bonuses from simplistic and boring to awesome is the fact that you can win up to 15 free bonus games per active pay line. If you have 25 active pay lines in play you can win up to 450 free bonus games if you fill every video reel with the bonus symbol.
After playing China Mystery often it doesn’t seem as though the bonus games are difficult to come by. Then again that could be memory bias as this is one of the more highly volatile slot machines from Konami Gaming. Bonus free games are helpful to winning big jackpots.
Some versions of China Mystery offer progressive bonuses but they’re not very high. The progressive jackpots aren’t the Wide Area Progressives that tie in games from multiple casinos that you’ll find in Wheel of Fortune and some other slot machines. The progressive jackpots are offered on fewer machines and, therefore, have smaller jackpots.

There aren’t any fancy bonus games with China Mystery so your jackpots come from big wins in the base game or free bonus games that play the same as the base game. The free bonus games don’t have any multipliers so you’ll receive the same wins in free bonus games as you would during regular games. The biggest max bet wins may pay more than a grand prize win in the progressive jackpots offered in some of the games.
The reels in many video slot machines often have randomly placed symbols on each reel but that’s not always the case with China Mystery. Reels have stripes of symbols appearing together and it can look as though a jackpot is right around the corner. Jackpots aren’t easy to come by when playing penny slot machines but when they hit it’s quite a site. The striping of symbols allows for a cover all effect with the same symbol appearing on each of the video reels and this pays out handsomely.
When you have the potential for 450 free games and cover all wins you have the potential for a magical hand pay jackpot. The biggest jackpots in China Mystery have a little fireworks show which psychologically can make jackpots feel even bigger.

The gameplay for China Mystery is so popular that it has spawned a few games that play like it. If you’re looking for a video slot machine with similar gameplay as China Mystery but with a different theme you can look for Mayan Chief, Lago Di Amore and Roman Tribune. The casinos often place these games near one another so they shouldn’t be too difficult to locate.