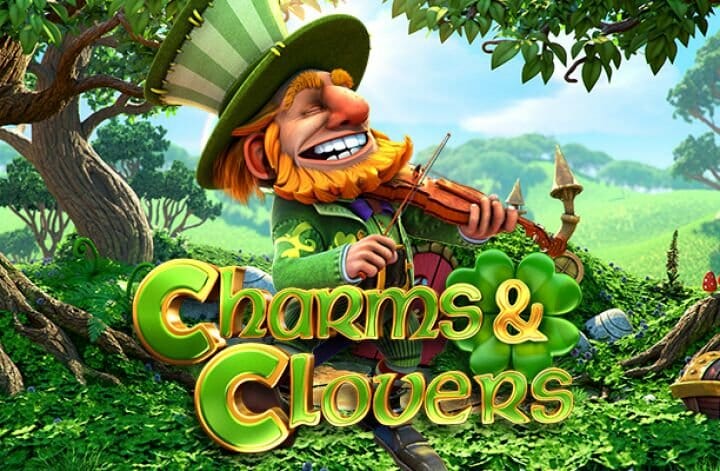 Betsoft Games is the developer behind the creation of the Charms & Clovers online slot. As Betsoft is not restricted in the USA, US players can play games produced by this developer.
The slot’s theme is based on the good ‘ole’ Irish luck as the title suggests. This is backed up with smooth animations and crystal-clear graphics. The gameplay itself comes with plenty of great features, most notably a 6th reel that is the key to triggering 1 of the 4 bonus rounds and to taking a swipe at 1 of 3 progressive jackpots; Mini, Giant, and Colossal.

Charms and Clover slot concentrates its special effects on providing players with an upbeat atmosphere surrounding the gameplay. Traditional Irish melodies play out in the background, and there is an animated jolly Irish Leprechaun standing on the side of the reels flipping a gold coin while spurring you on with his jolly laugh. If you like, you can turn off these background sounds via the mute option.
Graphics and animations are flawless with a green and fresh looking Irish Woodland setting giving the game its Irish character. As for the gameplay, Charms and Clovers is an interactive slot involving the player when the bonus rounds are activated. There is also a gamble feature which when activated the animated Leprechaun will run to the front of the slot presenting a betting board, so players can flip a lucky Irish coin for head or tails.
On top of this, all symbols in the game feature their own animated special effects that come to life on the reels when they form a winning combination.

The highest paying symbol on Charms & Clovers is the Irish Leprechaun. He has a ginger beard cheesy grin and he wears a green hat. Land this symbol 6 times on a pay line to win 5,000 per coin wagered on the line, which means betting 5 coins per line would mean you win 25,000 coins. The second highest paying symbol is the rainbow paying out 2,000 coins per coin bet on the line for a 6-symbol combination. After this the value of each symbol payout goes in this order; Gold Lucky 7, 4 Leaf Clover, Pot of Gold, Lucky Horse Shoe, Wood Bar Symbol, Ace, King, Queen, and lastly the Jack is the lowest paying symbol.

On the Charms & Clovers online slot, there are four bonus rounds all activate on the 6th reel.
Money Wheel: To trigger the Money Wheel Bonus Round, the stacked Money Wheel symbol needs to fill all 4 positions on the 6th reel. The Money Wheel is divided into 10 sections containing x4, x5, or x15 multipliers of the total spin bet and a Super Wheel; the latter triggers the Super wheel. Here the sections are split into x20 multipliers, an x40 multiplier, 2 Mini jackpots, and a Mega Wheel. If you land the Mini Jackpot, you will be paid the amount displayed in the corresponding jackpot box displayed at the top slot. However, land on the Mega Wheel, and you will be spinning for x100 spin bet multipliers as well as the huge Mega and Colossal Progressive Jackpots.
Mega Symbol: There are 4 stacked Mega Symbol icons on the reels. Land all 4 on the 6th reel to activate the Mega Symbol Bonus. The leprechaun symbol will change into a large 3×3 symbol on the reels, and you will be awarded 8 free spins to spin him on the reels. Giant, as well as small Leprechauns, will combine on the reels giving you combination wins from the highest paying symbol on the slot.
Golden Bonus: The Golden Bonus symbol is also stacked 4 times on the 6th reel. Fill the reel up with all 4 of these symbols to kick-start the Golden Bonus Round. A pick me bonus round will be launched whereby you pick one of the 5 pots of gold to reveal a multiplier up to 20x the triggering spin bet.
Pots of Gold: Land the 4 stacked Pots of Gold symbols on the 6ht reel to launch the Pots of Gold bonus round. You will be awarded 8 free spins along with the chance to add 1 to 3 additional Wild symbols to the reels after each free spin. By the 8th spin, you will have stacked wilds rolling on the reels helping you land combination wins.

The Mega Wins feature makes use of the 6th reel forming 6 of a kind combination wins. There are 4 mega Win rows running horizontally from left to right on the Charms & Clovers slot. Land 5 of a kind symbols in a straight line, so each symbol must be adjacent to the next, from reel 1 to reel 5 as well as roll in the same symbol on the same row on the 6th row for a Mega Win.

The Wild Symbol is easy to spot on Charms and Clovers. It is written in large gold writing on the icon with a bunch of clovers in the background. It can substitute for any other symbol in the game aside from the 6th reel Money Wheel, Mega Symbol, Golden Bonus, and Pots of Gold bonus symbols. You can also combine 5, 4, or 3 Wild symbols on any pay line for 600, 300, or 150 payouts per coin respectively. If the slot produces 6 Wild Symbols on a horizontal line from left to right, then the Mega Win Wild will be worth a 10,000 payout per coin bet on a line.