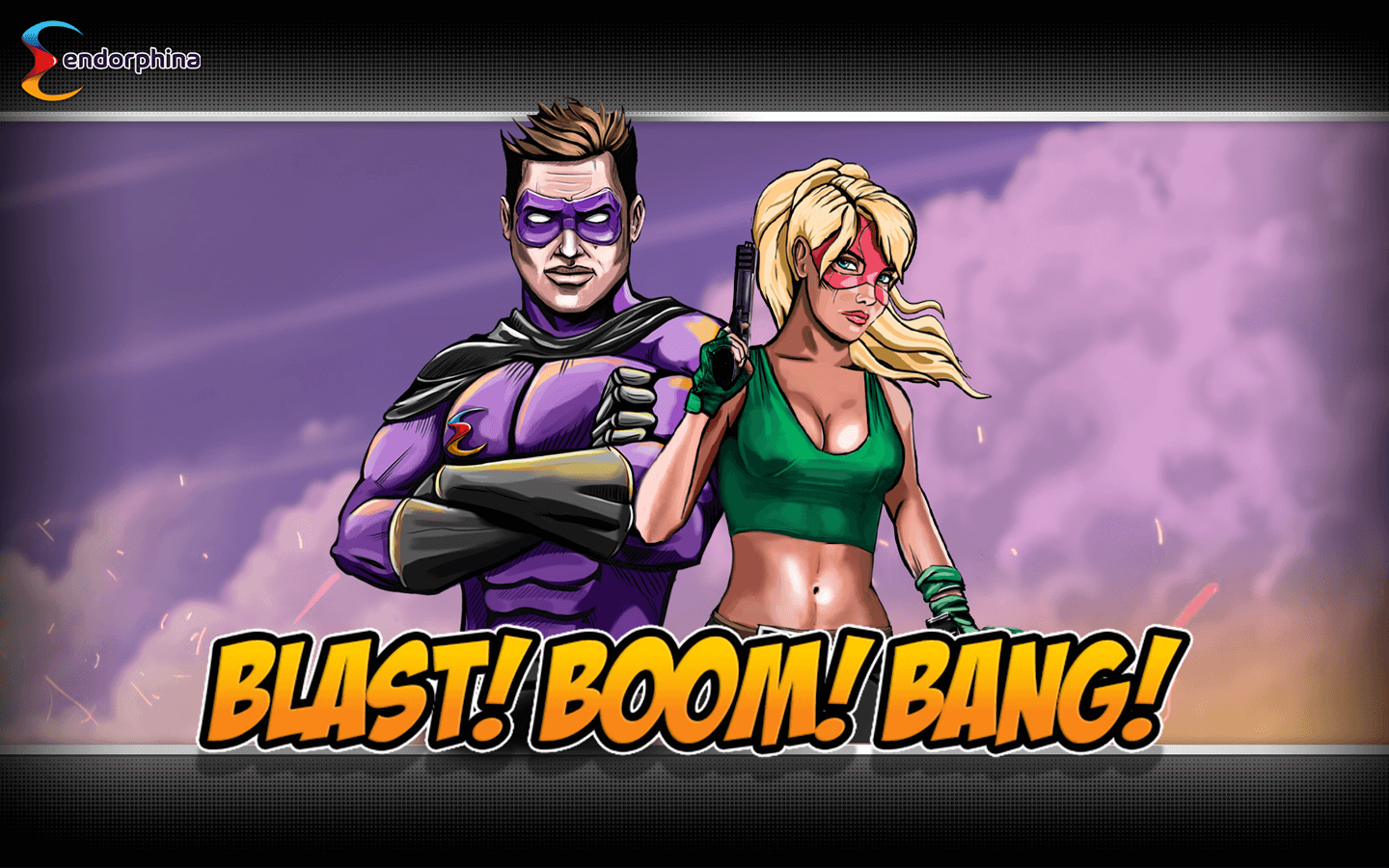 Blast Boom Bang is another top-quality online slot from Endorphina, a Scandinavian development team that has released a number of good slots over the years.
It will not be difficult to determine the theme of this slot as you will instantly pick it up once you have taken the time to load it up. Comic superheroes and villains are what this theme is all about and it will certainly take you back to your childhood once you start playing it.
This five-reel, 50-payline online video slot is mobile-optimised, has an RTP of 96% and will keep your more than entertained via its range of bonus features such as stacked symbols, wild symbols, scatter symbols, a free spins round and a gamble feature.

When it comes to the graphics and sound on Blast Boom Bang these are actually very impressive. All of the artwork has been done to a very high-standein a cartoon-style which absolutely fits the style of a comic book superhero-themed online slot. You get a variety of colours on the reels that are set against a backdrop of purple.

The graphics have been designed in such a way that you should be able to run this slot on pretty much any computer or mobile device. Even if they seem to be a bit much for your device, they can be set to medium or low if high is affecting your experience too much.
There are not too many animations to see in this slot other than the reels spinning and some that occur when certain winning combinations roll in on the reels but those that are there have been done well.
As for the soundtrack and the many sound effects, these are nothing special really but they do help you to feel the theme of this slot. If you ever get tired of them, you can simply turn them all off in the menu. In there you will find the paytable of the game as well which is a handy way to learn the many different payouts you can achieve.

In total, you will find ten different symbols on the reels of Blast Boom Bang and five of those will be the theme-related high-paying symbols. The highest of these is the male superhero which will payout 100x the line bet if you are lucky enough to land him five times on an active payline. Four, three and two of him respectively, will pay out 50x, 15x and 5x.
The next highest paying symbols that you will want to see regularly are both the female superhero and the villain. Both of these symbols will reward you with 75x, 50x, 15x and 5x the line bet respectively for finding them five, four, three or two times in a winning combination.
A motorcycle and a fist are the remaining higher-paying symbols and these will both pay out 75x the line bet for five in a winning combination and 25x and 10x for four and three respectively.
Of the remaining standard symbols on the reels, these are the playing card symbols that you will have seen on other online slots. These will be responsible for the payouts from the lower end of the scale with the Ace offering the largest payout with 50x the line bet being awarded when you located five of them in a winning combination.

There might not be as many bonus rounds as you might find on other online slots but Blast Boom Bang does have a couple that has the potential to bring you some regarding payouts.
Here are the two main bonus rounds on Blast Boom Bang:
Free Spins: Activating the main bonus round on Blast Boom Bang is achieved by landing three of the scatter symbols anywhere in view on the reels. They can land on the first three reels only but when they do, they will not only see you given 10 free spins but you will also win 2x your spin bet as well.
During that free spins round, should you land another three scatter symbols you will win a further 5 free spins on top. You can also earn 5 free additional free spins during the free spins round and even on the base game should you ever land a single scatter symbol directly below a wild symbol.
Gamble Feature: There is also a gamble feature on Blast Boom Bang which if you have played Enorphina slots before, will recognise. It is the very same beat the dealer game that you will find on many of their slots and you will get the chance to play this if you choose to do so, after any win that you record on the reels.
Once you select ‘Take Risk’ after a win, you will be taken to a new screen with five playing cards. One of these playing cards will be faced up and the remaining four will be faced down. Your task is to select one of the four-faced down cards with the idea of beating the value of the one that is faced up.
You can try to double up as many as ten times in a row if you have the courage and get lucky enough but you do stand the chance to lose a lot if you lose.

A bomb with a timer is the wild symbol on Blast Boom Bang and this will land on the second, third, fourth and fifth reels only. When it does, however, it will be able to help you form some winning combinations due to it having that famous ability to be able to substitute for most other symbols on the reels. The only symbol it will not be able to replicate is the scatter symbol.