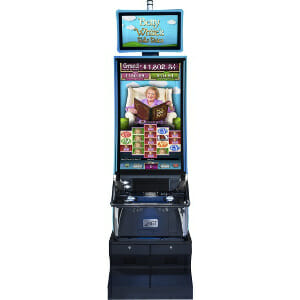 Betty White is a beloved actress from her many years of television appearances and her starring role on “The Golden Girls.” It’s been many years in the making but IGT is finally bringing this Hollywood legend to a casino near you.
Her star is so big that Betty White actually voices two different slot machine titles, “Story Time” and “Tall Tales.” For the time being, players will typically find the two Betty White slot machine titles side by side in casinos. If one game generates more interest from players, you may see the games separated over time.


Click Here to Play Slots at Our Top Rated Casino!
IGT used the Betty White video slot machine series to debut a new game console. The CrystalCurve cabinet features a beautiful 43-inch curved ultra-HD display that delivers pristine 4K graphics. The game is vivid and graphics are as crisp as players will find in any slot machine.
Let’s be real, the majority of people playing this slot machine for video and narration by the one and only Betty White. The games both feature custom voiceovers that you won’t hear anywhere else. Betty White is full of witty double entendres that don’t get boring after hearing a few times like TV show or movie clips in some other slot machines. There’s a second voice in the game but most people will forget he even exists.
The “Tall Tales” version of the Betty White slot machines features a somewhat confusing and mesmerizing 3x4x5x4x3 video slot reel. There are 720 different ways to win with this configuration! Players have five wagering options with this penny slot machine. The minimum wager is set to 60 credits and the maximum is 300 credits. Each incremental increase in wager will receive better odds. A 60 credit wager has “good odds,” 120 is “better odds,” 180 is “even better odds”, 240 is “much better odds,” and 300 credits is “max odds.”
Betty White’s “Story Time” theme is available in both penny and nickel denominations. This version of the game features stacked major symbol and expanding wild symbol on reels two, three, and four. When the symbol lands, the entire reel becomes wild and expands. Non-wild reels re-spin and pay until no new expanding wilds land on the reels.
The Betty White slot machines are described as having a medium-volatility play. This should keep players engaged for longer sessions. Of course, the longer play will give players a better chance at a bonus round, a big win or even the progressive jackpot.

The Betty White slot machine series has multiple fun Bonus games such as the “Betty’s Poker Party,” “Betty’s Target of Riches,” and “Betty and the Beanstalk.” There’s also a Three-level “Lucky Coin” progressive jackpot with “must hit by” limits. This type of progressive often keeps jackpot hunters playing the game longer as they close in on the big wins.
The free spins Betty and the Beanstalk Bonus round brings eight free games that may be re-triggered with two or more Bonus scatter symbols. This Bonus game features a special scatter symbol that enlarges the beanstalk reels where the symbol appears. This increases the potential for big wins. If a player gets two or more symbols they receive more free spins.
Betty’s Poker Party is a pick ‘em Bonus game. The player will pick the back side of cards to make a five-card poker hand. Winning hands are ranked like the real game. The better the poker hand-picked, the larger the payout.


Click Here to Play Slots at Our Top Rated Casino!
Betty’s Target of Riches is a wheel Bonus game. There are various unspectacular credit denominations to win during the first round of this Bonus round. However, there are four “boost” pieces which increase the credits offered and send players to a re-spin. The boost feature is only available once as those pieces change into large winning denominations. This is where you’ll find the larger wins in this Bonus round.

The Betty White slot series is produced by one of the largest slot machine manufacturers in the world, IGT. Since the Betty White slot machines are just hitting brick and mortar casinos they aren’t currently available at any online casinos. However, IGT is very active placing their games in online slots casinos so there is a good chance that it will be seen soon, so long as their licensing agreement with Betty White allows.