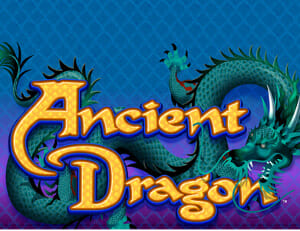 In terms of standardization of games, no one has Konami beat. In most cases, a quick glance is all you need to differentiate a Konami slot machine from those produced by other gaming companies. This holds true with the Ancient Dragon slot machine, one of many Asian-themed games from Konami.
Unlike some of Konami’s other slot titles, the Ancient Dragon machine has a mysterious theme that is a bit more alluring than many other cliché Asian-themed games. The look, feel and gameplay experience is right on par with what you will get from most other Konami slots.


Click Here to Play Slots at Our Top Rated Casino!
Ancient Dragon is a 5-reel game that has two outer reels with four symbols and three inner reels each with five symbols. The symbols used by the game include poker card rankings (9-A), a gold fish, a ying-yang symbol, a lily pad with flower symbol, a turtle, a gem, a ying-yang symbol, and a golden dragon. It must be noted that there are two variations of the golden dragon symbol. Though they are identical, one is a dull gold color while the other is a lustrous gold.

Like many other simple Konami slot games, there is not a wealth of bonus features alongside the base game. Being no exception to this, Ancient Dragon really only has one bonus feature. This is somewhat disappointing, but should you trigger the Feature Game you might be walking away with the Ancient Dragon’s riches in spite of the heavy house advantage.

Bonus rounds earned while playing Ancient Dragon are great because they can award you a massive amount of money in a rather short period of time. Even if you are awarded a maximum of 25 free games, you are still only going to allot maybe five minutes to complete all 25 spins. Of course, winning additional free spins during the Feature Game can mean additional time, but you can hardly describe the Feature Game as being lengthy.

Unfortunately, our search for the Ancient Dragon slot game at online casinos yielded no results. For the time being, this is a game that can solely be found on the floors of brick and mortar casinos. Luckily, Ancient Dragon is a popular game and can be found at both large and small casinos.