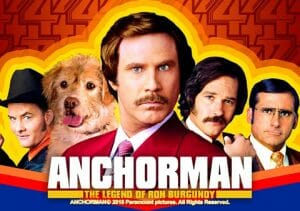 Anchorman: The Legend of Ron Burgundy is a popular video slot game that is manufactured by Scientific Gaming for Bally. This game is based on the Will Ferrell movie from 2004, where he plays the part of a news anchor during the 1970s. The Anchorman slot machine features 5 Reels with 25 Lines + a 50 credit bonus bet for a total maximum bet of 375 credits per spin. The game is most commonly found as a penny slot or 5¢ machine.
Though penny slots do have a higher house edge than games in other denominations (such as high limit slots), Anchorman still attracts players with exciting gameplay, enticing bonus rounds, wild symbols and a large progressive jackpot.

The theme of the Anchorman slot game is based on the movie and its characters. There are symbols for the fictional main character, Ron Burgundy and his Channel 4 News Team as well as other miscellaneous items such as sunglasses, a beer glass, cowboy hat and the infamous dog from the movie. This slot game is played on a relatively interactive video reel machine that features clips from some of the most iconic parts of the movie.

There are a total of 25 paylines on the Anchorman slot machine. Wild symbols can be found on all lines, while bonus symbols are only features on the middle three reels. Other symbols include that of characters played by Will Ferrell, Steve Carell, Paul Rudd and David Koechner. Beyond these, you will find symbols with a cowboy hat, beer mug and sunglasses.

As we mentioned in our introduction, Anchorman: The Legend of Ron Burgundy is primarily found on the main gaming floor at casinos as a penny slot. With a max bet of 375 credits, that means most games have a maximum bet of $3.75 per spin. Sometimes this slot machine can be found in $0.05 or $0.10 denominations, though it is not as common as the penny variation.

The bonus round in Anchorman slots is called “Big Bonus” and can be triggered by landing 3 consecutive “Bonus” symbols on the middle 3 reels of the machine. When the bonus is initiated, a clip from the movie is shown on the machine’s reels and a “ribbon” is generated where each slot features a different prize, similar to Wheel of Fortune. The place where your pointer lands determines your bonus win. Bonuses can land one of the progressive jackpots, free spins or credits.
Within the main bonus, there are 4 additional bonus rounds which are all related to one of the main characters from the movie.

The second possibility for free games is found in the Whammy Feature, where players will get 12 free spins. This feature has a “win ladder” next to the reels which will fill up every time one of the Whammy symbols appears. The more you fill up your Whammy meter, the higher the payouts are.

The next bonus round is called the “Weather Wheel”. This feature begins with the player getting a spin on the blue wheel which awards them with anywhere from 75x to 1000x their total bet. If you land on the “Level Up” area then you will be granted a spin on the green wheel, which offers wins up to 2,000x your total bet. Finally, if the player gets an additional “Level Up” they will be allowed to spin the red wheel. This wheel offers players the opportunity to multiply the wins from their last two wheel spins by anywhere from 2x to 10x.

Brian Fantana was a popular character from the movie played by Paul Rudd. Landing his symbol during the bonus round will trigger the Sex Panther Pick feature. This will award players the opportunity to choose from one of 15 Sex panther bottles on the screen. Each one awards a random prize, and once all selections have been made, the player then chooses one of the five condom packs in order to score a multiplier. The multiplier can be anywhere from 2x – 10x.

The largest wins a player can attain in the Anchorman slot machine are progressive jackpots. These prize amounts often reach $10,000 or higher and have 3 different levels; Nice, Very Nice, or Really Good. These tiers of the progressive range from as little as $100 or less (for the Nice jackpot), to more than $10,000 (for the Really Good jackpot).

Anchorman: The Legend of Ron Burgundy slots can only be found at land-based casinos right now. Aa far as we know, there are not any online slot games available with the Anchorman theme, as the rights are owned by Paramount Pictures, who has an exclusive partnership with Scientific Gaming/Bally.