4 of a King Online Slot 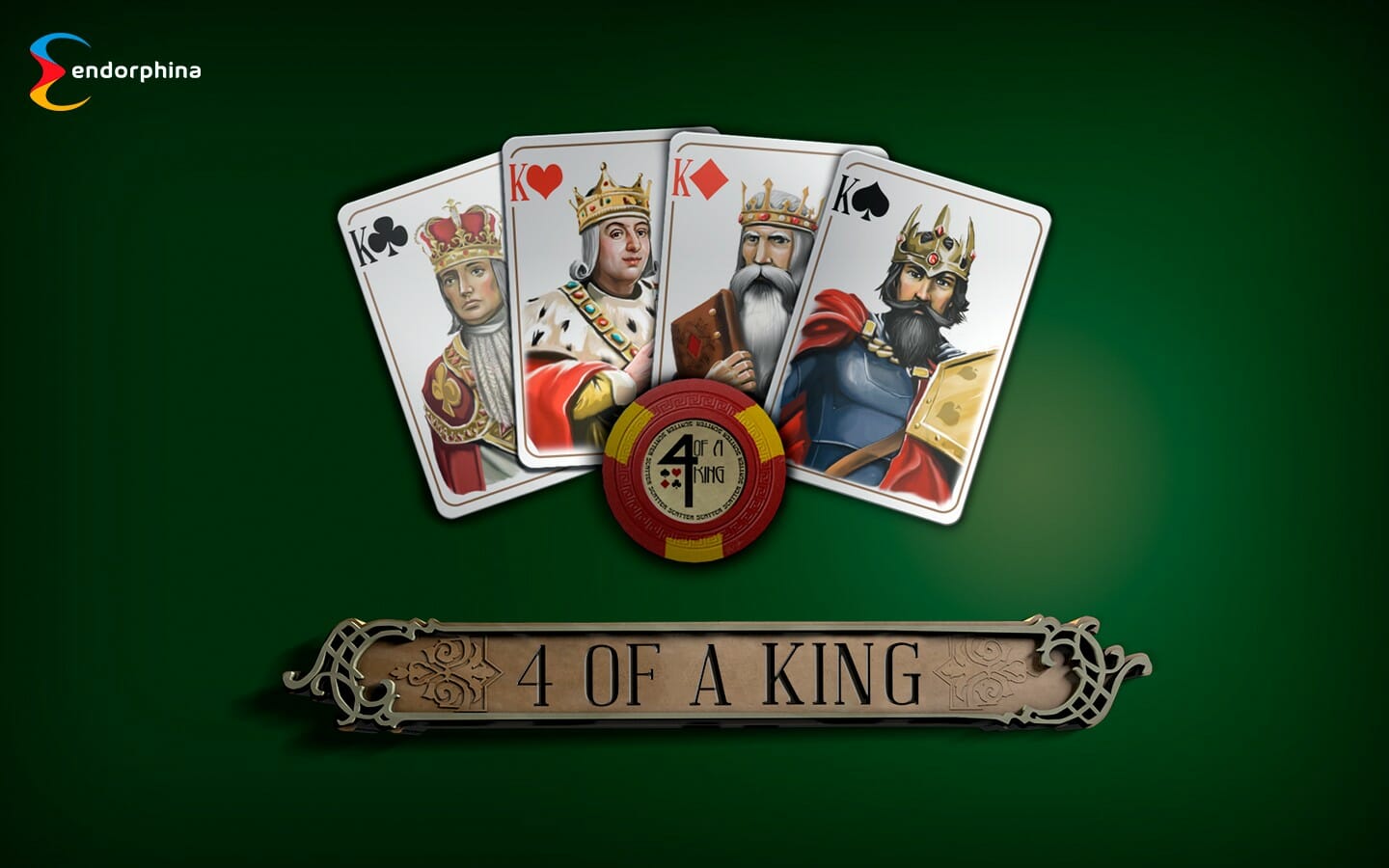 4 of a King is an online slot by Endorphina, a development team that has been making a big name for themselves over the past few years.
The theme of 4 of a King will be quite obvious as soon as you load it up. It is themed around an actual land-based casino with the many symbols being that of the many casino games that you can enjoy. It is set in the 50’s as you will easily be able to tell from the artwork on the symbols.
4 of a King was first launched back in 2014 and is one of the earlier efforts by Endorphina. It is a fairly popular slot at the online casinos due to its being mobile-optimised and thus can be played on many different mobile devices.
This medium variance online slot has five-reels, ten paylines, some good graphics, is a pay both ways slot and has a number of game features such as a gamble feature and an expanding wild symbol. You will also find that 4 of a King has the same return-to-player percentage as most other Endorphina slots of a respectable 96%.

4 of a King Sound and Graphics

Endorphina has always been renowned for producing crisp and clean slots that not only look great but also function optimally on practically any device you are using to play them. They have always had mobile users in mind and that is no different with 4 of a King.

Each of the symbols on the reels has been drawn in a classic casino style and the artwork is definitely of a very good standard. There is not too much in regards to animations on 4 of a King but the reels do spin very smoothly. If you do find that your device is struggling with the graphics a little, you can always turn them down in the menu as you have a choice of low, medium and high.
The sound of this online slot is a little basic but it does the job. The soundtrack and the sound effects can all be turned off or turned down, so even if they do start to grate after a while, they are not a problem.

There are eight different symbols on 4 of a King and each and every one of them is related to gambling or casinos in one way or another. The highest paying symbol is the couple that has just won a handsome win. They are worth 1,000x the line bet if found five times on an active payline while four and three of them will payout 100x and 20x the line bet respectively.
Next up are two different symbols that offer the same payouts. These are the male and female croupiers and these will pay you 500x, 60x and 10x the line bet when found five, four and three times in a winning combination respectively.
The lower paying symbols on the reels are all represented by different coloured playing cards. The red and gold colours will both bring a max payout of 200x when landing five of them while the green and blue cards will get as much as 100x the line bet for five of them.
The only other symbol you will see on the reels is that of the expanding wild but we will discuss that in more detail a little later.

4 of a King Bonus Rounds

As 4 of a King was designed to offer mobile users quick and exciting action on the reels rather than anything overly complicated, there are not too many bonus features that you can take advantage of.
They do have a couple of features to look out for.
Gamble Feature: The first of the bonus features on 4 of a King by Endorphina is that of a gamble feature. This can be taken advantage of after any win on the reels and it gives you the chance to try and double your winnings. You can even do this as many as 10 times if you manage to get lucky enough.
You are tasked with choosing from one of four cards in the hope that it will beat the value of the dealer’s card which is already face up. If you do beat the dealer, you have the option of banking the money and returning to the reels or having another pop at trying to double up. Anytime you lose though, you will lose everything that you had already won.
A tie will just give you another turn while the Joker card will allow you to beat any card that the dealer has face up on the table.
Pay Both Ways: Another redeeming feature of 4 of a King is that it allows winning combinations on the reels to be formed in both directions. Most online slots only allow wins from left to right but on this one, you can also win when combinations start from the right and finish on the left.
This is what makes this online slot appealing despite only having ten paylines, as the extra potential to land winning combinations makes up for this.

4 of a King Wild Feature

The poker chip is the games wild symbol and what is special about this symbol other than it can substitute for every other symbol on the reels, is that it will expand to cover all adjacent reels when it lands. It can only land on the middle reel and does not have its own standalone payout when found multiple times but you can just imagine the payouts you can win as it expands to cover the symbols next to it.