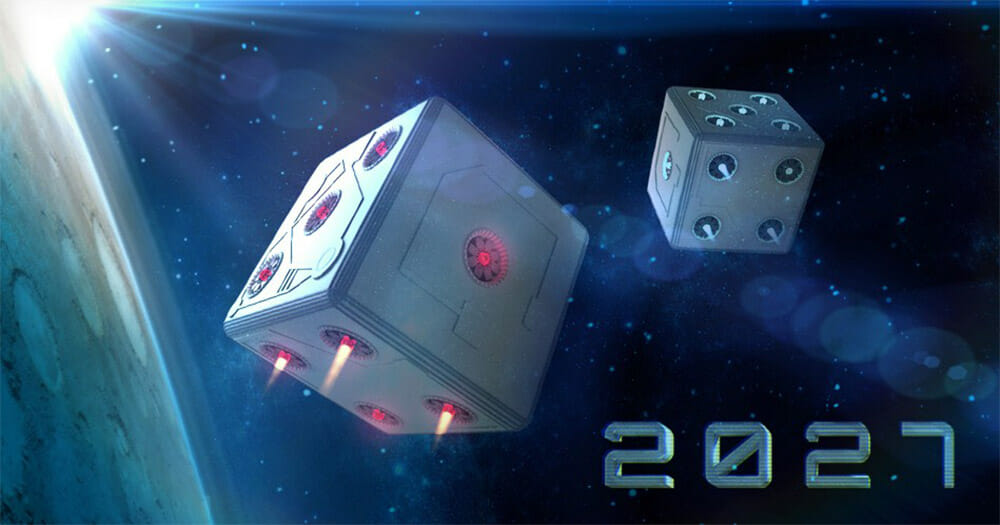 Producer: Endorphina
Display Type: HTML5
Slot Type: Video Slot
Reels: 5
Paylines: 9
2027 ISS is a five-reel, nine-payline slot that was developed by Endorphina. Themed around space, this online slot will have you hoping that the stars align for you and that you will win some impressive payouts.
This slot has an RTP of 96%, is packed with bonus features and contains some glorious graphics and animations. Of those features, it will be the free spins round that you will want to see the most as you could potentially have an unlimited amount of them. There are still plenty of big wins to be had on the reels too, however, with 9,000x the line bet being the largest of them.

Endorphina is renowned for producing quality slots that are full of great graphics and sound effects and 2027 ISS is another they can be proud of in that respect. It has some crisp animations and the symbols and the backdrop of the game have been drawn superbly.
Even the soundtrack fits the theme of the slot perfectly and will have you thinking about flying around space in a shuttle or spaceship.

The layout will also be appealing to players as it has been designed to be as easy-to-play as possible. All the buttons are self-explanatory and you even have a paytable that will help you to understand the different winning combinations that can be made on the reels.

The symbols on 2027 ISS are types of gambling equipment that have been turned into spaceships, satellites and other types of spacecraft. The roulette wheel-shaped spaceship and the tombola shaped space station are the two highest paying standard symbols on the reels. They will both bring in 750x, 125x, 25x and 2x the spin bet when found five, four, three and two times on an active win line respectively.
The dice are the next valuable symbols on the reels of 2027 ISS and five of them will be worth a payout of 400x the line bet. If you manage to land four or three of them instead, you will be given 100x and 20x the line bet.
Playing cards and a bingo ball satellite make up the final two higher paying symbols and they are both worth the same in terms of payouts. Five of them in an active payline is worth 250x the line bet while four and three are worth 75x and 15x respectively.
There is also some futuristic playing card symbols that you find on the reels of 2027 ISS and these are the 9, 10, Jack, Queen, King and Ace. These are where you will find some of the lower payouts on this slot with the biggest of them being 125x the line bet.
There is also a scatter symbol on the reels that is worth some excellent payouts as well as being the symbol that unlocks the main bonus feature on 2027 ISS. These do not even have to be found in winning combinations for you to be paid out. Just landing five of them anywhere in view on the reels will pay you 4,500x the spin bet. Four, three and two of them are also worth 180x, 45x and 18x the total bet.

There are two bonus features on 2027 ISS that you should be aware of:

When you manage to land three or more scatter symbols on the reels you will be given access to a free spins round that could be unlimited. Whats more, during those free spins rounds, any wins that land on the reels will be multiplied by three.
While the free spins are unlimited there is a catch as you might expect. They are only unlimited until a fuel cell lands on your reels. If you are lucky enough to land a hyperspace jump symbol on the reels on the same spin as a fuel cell, the fuel will become null and void and you are free to continue with your free spins.

Another good feature on 2027 ISS is that of the gamble feature which players can take advantage of after every win they land on the reels. By clicking ‘take risk’ they are taken to a screen where they have to choose one of four cards in order to try and find one with a higher value than a card that is already displayed.
If a player’s guesses correctly they will double the win they found on the reels. They can even do this up to ten times if they are lucky enough. There are joker cards which can be found too and these will beat any other card in the deck. This is a double or nothing game so remember that should you lose you will lose everything.

Most online slots will have a wild symbol but what we like about 2027 ISS is that it has been given an added twist. The wild symbol on 2027 ISS is that of the lady astronaut and it will substitute for any other symbol on the reels apart for the scatter symbols. The twist with this symbol is that any winning combinations that it helps to make will have their payouts doubled.
Wild symbols also have their own payouts associated with them too and will actually bring the largest payouts that are achievable on the reels. Finding five of them on an active payline is the game’s jackpot of 9,000x the line bet while four and three of them are worth 2,000x and 250x respectively. Even landing them just twice will have you paid out 10x the line bet.