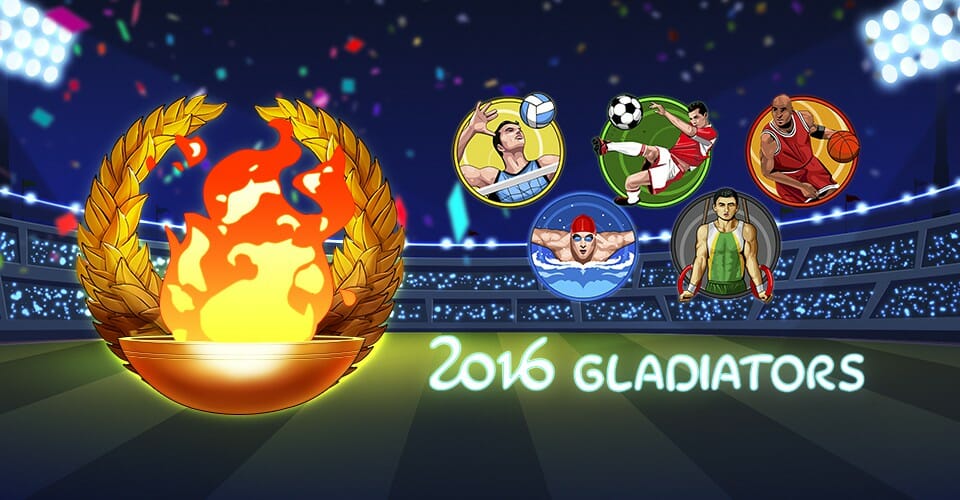 Gladiator 2016 is an Endorphina slot. Endorphina has built up a sound reputation for producing fun and exciting mobile slots available to US players.
The theme is based on sports rather than the Roman Style Gladiator themes we are used to seeing from most other slot providers. Badminton, basketball, table tennis, boxing, weights, and more sports bring to the table an all-around sports gladiator contest.
There are plenty of ways to win on the Gladiator 2016. Players can win up to 50 free spins, but for the most part, 10 free spins are most common and players will be picking up plenty of extra cash with the x2 multiplier applied. The wild also plays its part in keeping player’s bankrolls nicely topped up as it substituted for other symbols in the game. Furthermore, there is a gamble feature that allows you to see the card you will be playing with before you decide whether or not you want to gamble.

The sounds and graphics are basic enough, with not much animation at all. The idea of 2016 Gladiator is to be a fast spinning and basic slot. This is perfect for mobile players and also suits those that want to play via desktop. 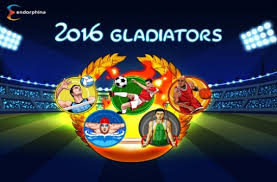 There is themed music in the background and the reels churn out some pretty basic sounds. You would expect more cheering sounds as this is based on sports, but instead, the sounds are more electronic slot-based sounds. You can choose to turn on the master, effects, and/or background sounds at any time via the menu option. You can also change the quality of the slot with low, medium, or high quality. You can also stretch the screen or select the full screen.

On 2016 Gladiator online slot there are two main feature bonuses:

To launch the free spins round, you will need to land a minimum of three scatter symbols. This will trigger 10 free games. However, if you land four scatters, you will get 20 free games, and amazingly five scatters will give you a continuous 50 free games. Following each free spin, there is a team of winners that is decided by five sportsmen.
– Soccer player
– Basketball player
– Volleyball player
– Gymnast
– Swimmer
The one with the most symbols of their kind on the reels is the winner of that round. The winning team symbols will be replaced with the Laurel wreath wild symbol, which will stick on the reels. All prizes are multiplied by two.

When you land a win on the reels you can opt to either ‘Take Risk’ or ‘Take Win’ before your next spin. This starts a card game whereby you will be presented with four face-down cards and one face-up card. If the face-up card is a low number, then it is good to gamble. You just need to select one of the face-down cards and hope that it will produce a card higher than your face-up card. When you win by having a higher card, your bet will be doubled. You can then choose again to ‘Take Risk’ or ‘Take Win’. You can continue to gamble your winnings if you feel the risk is worth it.
Another point worth making is that if you decide to ‘Take Risk’ from the base game when you see the face-up card, you may not like your odds. At this point, you do not need to gamble. You can just simply opt to exit the gamble round by selecting ‘Take Win’ with no penalty incurred for doing so.

The wild symbol is very easy to spot as it literally says ‘WILD’ on red writing on an Olympic winner’s wreath. This symbol is 2016 Gladiator’s wildcard symbol. It can substitute for any other symbol on the game helping you to complete more combination wins. Note that the wild symbol cannot substitute for the scatter.