With the many casinos in Las Vegas and Atlantic City—as well as those in other cities—it might be difficult to believe that the nation’s most highly-rated casino is located in Uncasville, Connecticut. While that may be so, the Mohegan Sun in Uncasville was named Casino of the Year by the International Entertainment Buyers Association last week.

At the IEBA Honor and Awards ceremony that was held in Nashville, the award was announced. It is interesting that the Mohegan Gaming & Entertainment flagship casino received such a prestigious award, but even more interesting is the fact that this is the second time the site has received this honor. If you’re wondering just how big of an award this really is, the determination is made by the votes and opinions from executives of the country’s biggest agencies, management companies, arenas, and other large companies and organizations. 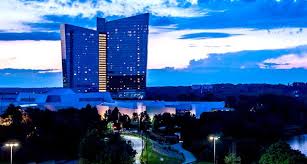 A Resort Casino to be Admired

As you could have probably guessed, Mohegan Sun’s crown jewel is much more than a casino alone. In addition to its massive gaming space, there is also a sports arena that regularly hosts sporting events, concerts, and so much more. In addition, it recently put the finishing touches on an exposition center that cost more than $80 million.

In total, the new expo center will top 240,000 sq. feet with a ballroom that is 20,000 square feet in and of itself. There is so much more involved in the expo center with all of its amenities and smaller meeting rooms, but it does well to help one understand the sheer size of Mohegan Sun. The expo center itself will officially open its doors in the summer of 2018.

Perhaps the biggest reason for being awarded the United States’ top casino is the addition of their brand-new Earth Tower Hotel, which cost a whopping $130 million. In addition to constructing additional hotel space, Mohegan Sun also spent $50 million renovating its original hotel tower, which was built when the casino opened over 14 years ago.

Mohegan, as an organization, has only 6 properties in total, so an award like this does well to boost their brand and give them some much-needed exposure in an industry dominated by seasoned giants. Connecticut, and New England in general, may not be a bastion for casino gambling, but it is growing slowly but surely. MGM Resorts is opening a casino in Massachusetts that will be operational within a year, and Mohegan is teaming up with Foxwoods to open a competing site just across the border in Connecticut.